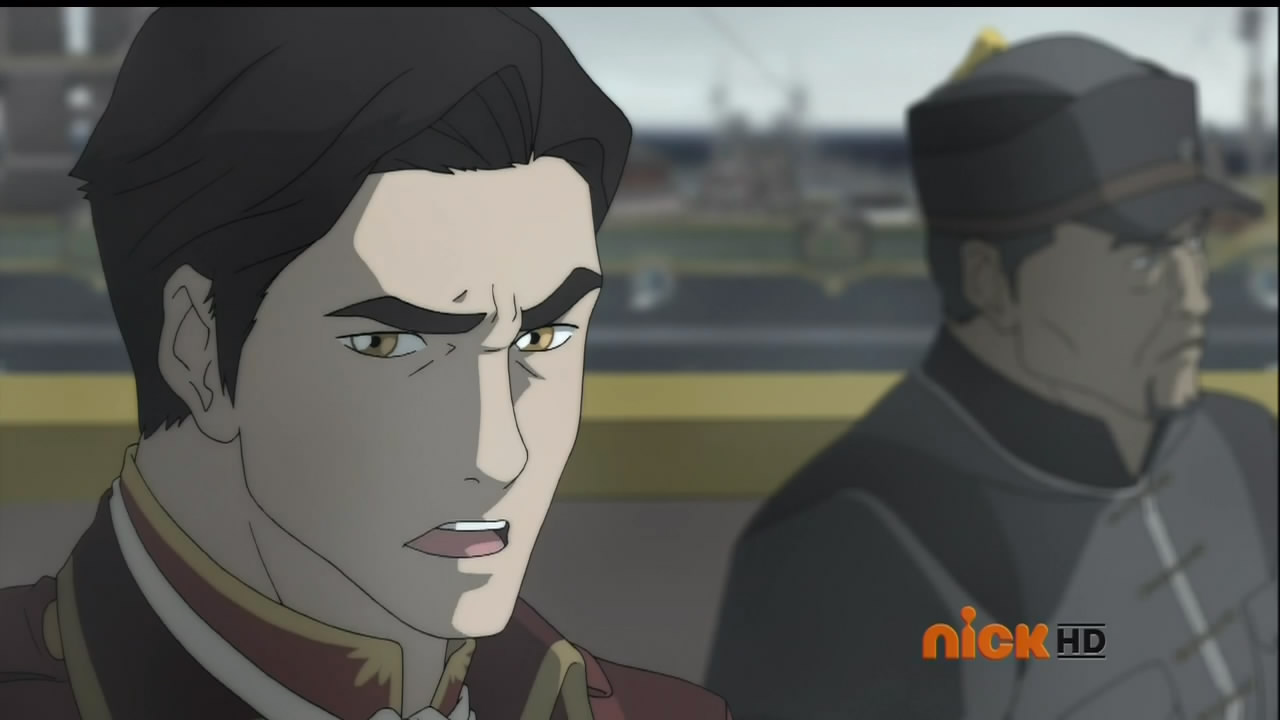 It’s finally time for The Legend of Korra book three finale, E12 “Enter the Void.” Is it everything we wanted and more? Let’s take a closer look. The episode begins with team Avatar piloting Suyin’s airship to the Northern Air Temple in the hopes of rescuing the airbenders from Zaheer. Unfortunately, P’Li’s bird’s eye view and Ghazan’s ability to rain lava on anyone climbing the mountain make a full on assault impossible. Korra decides to do as Aang would have done and turn herself over to the Red Lotus. Still, Suyin strategically places her men nearby for tactical support.

We briefly see Zaheer meditating in front of an Airbending statue that looks like the Chinese Buddha.  He recites a mantra about entering the void and becoming the wind.  P’Li and Zaheer then share a tender scene where get a small glimpse into P’Li’s past.  Apparently she was to become a weapon for a warlord until Zaheer set her free.

Korra meets Zaheer at the peak of mount Lahima while Bolin, Mako, and Asami go to retrieve the airbenders.  Tenzin is bound gagged and badly beaten on the floor with all the others behind him.  However, just as Korra is put into unbendable chains, Ming Hua reveals that all the airbenders were ice dummies dressed lead team Avatar into a trap.

Korra, still in chains, desperately struggles to fight back as Lin and Suyin’s metalbenders try to rescue her.  They cut loose Zaheer’s airship in order to trap him on the mountain peak.  Meanwhile, Ming Hua and Ghazan flee to Zaheer’s side but leave the temple flooded with lava.  Tenzin, Mako, and Asami escape through a secret exit thanks to some quick earthbending from Bolin.

Korra and her father are fighting Zaheer and seem to have the uppser hand, but at the last second, Zaheer dodges Tonraq’s final strike and blows him off a cliff.  Lin with a final declaration of love for her sister, draws P’Li’s fire so Su can taker her out.  Just before P’Li is about to deliver a fatal blow, Su wraps her armor around the combustion bender’s head, causing the explosion to backfire.

Though Zaheer is able to capture Korra, Lin and Su seem to have him cornered.  However, we then see what his mantra was alluding to.  He recites it one last time and detaches himself from the world, gaining the ability to fly away.

The other half of Team Avatar seems to be at the end of their rope as well.  They come to a dead end at the edge of a cliff and as the lava rushes towards them, Bolin stops it.  That’s right, somebody on Reddit called it early.  Bolin failed so hard at metalbending to build to the fact that he is a lavabender.  Kai arrives immediately after this realization to bring the four heroes back to the others.  After recounting the events that just occurred, Kai reveals that he knows where the Red Lotus is hiding the airbenders. Part one ends with Korra suspended by chains in front of a giant cave painting of a lotus flower.  Believing her father to be dead, Zaheer tells Korra her pain will end soon.

E13 The Venom of the Red Lotus

Zaheer finally reveals his reason for capturing Korra.  He wants to use a poison to force her into the Avatar State, so he can kill her and end the Avatar cycle forever.  As Korra, struggles to keep from going into the Avatar State, Zaheer remarks that she can’t resist forever.  She begins to hallucinate, haunted by visions of the villains she’s defeated.  Amon, Vaatu, and Unalaq taunt her into letting go. She finally does and is able to rip the chains holding her straight from the cave walls.  The Red Lotus is overpowered so Zaheer flees outside.

While this is happening, Team Avatar frees the airbenders and follows the fight outside.  Bolin hangs back to have a lavabending showdown with Ghazan and Mako does the same with Ming Hua.  Mako is cornered by Ming Hua’s octopus technique, but he shoots lightning at the water and electrocutes her.  He is then able to lend a hand to Bolin as they easily take out Ghazan.  Rather than go back to jail, he collapses the cave on himself.

Korra’s power is out of control as she pursues Zaheer, but the poison soon takes effect.  Korra is helpless to stop Zaheer as he suffocates her like the Earth Queen.  But suddenly a whirlwind begins to suck Zaheer into a tailspin.  The new airbenders, with Jinora as the leader, construct a massive tornado to capture Zaheer.

Unfortunately, the poison has been in Korra’s system for too long.  She struggles to even remain conscious.  Luckily, Jinora exclaims that the poison is metallic and Suyin bends it out of her.  We cut to two weeks later where Korra is preparing for a public appearance.  We see she is so weakened from the poison that she needs a wheelchair.  She is welcomed back to the city as a hero by the president and goes to a ceremony at the air temple.  Jinora has received her tattoos as an airbending master.  Tenzin gives a speech about restoring balance and says that while Korra recovers, the airbenders will become nomads, traveling around the world restoring balance.

Much like book two, I think there were a lot of great ideas in Legend of Korra Book 3: Change.  The philosophy of the Red Lotus is fascinating, their powers are formidable, the quest to find airbenders was promising, and Kai was a well thought out character.  The problem came with tying all these disparate pieces together.

Rather than a constant looming threat, the Red Lotus felt like four background characters without anything productive to do for most of the season.  This is because team Avatar didn’t fear them or even care about them.  Even after they finally arrive, we learn next to nothing about them.  Comparitively, Ty Lee and Mai had fleshed out characters and arcs that were given time to develop.

Another issue was all of the abandoned plot threads.  We never get to learn what the Queen was planning nor do we care about the spirit wilds that were said to be wreaking havoc on republic city.  Kai and Jinora could have been nice additions to the main squad but instead they were pushed aside.

The plotholes and coincidences are just insulting this time around.  Lucky coincidence Bolin was a lavabender with virtually no buildup, foreshadowing or payoff.  Even worse was the mysterious poison that somehow activates the Avatar State but luckily is made of metal so it can be bent out of her.  “They didn’t just bend the poison, they bended my sense of plausibility,” say experts.

The characters also grow very little.  Whereas season two saw Korra, Bolin, and Mako go through dramatic transformations (even if they were poorly paced) season three shows little to no change whatsoever.  Jinora becomes a bit more belligerent and we see Lin Beifong change instantaneously from grumpy to gleeful.  But our mains are stuck where they started at the beginning of the season.

However, it’s not all bad.  Thematically, this was the strongest season of Korra so far.  Almost every element subtly suggests that the old ways must be let go for the sake of change.  Still it shows how painful it can be to let the past go.  We see this with Lin and Su’s issues as well as Jinora’s desire to become mature.  We see it with little things like a Pai Sho game and some frolicking spirits.  We even see it with the locations like the modern Zaofu which succeeds where the decrepit Ba Sing Se fails.

All in all this season was incredibly enjoyable to watch if a bit unsatisfying.  While I can’t be sure where Korra will go in the next and final season, I’m still excited to find out what’s to come.  How long will Korra be confined to a wheelchair?  How will the airbenders fare as peacekeepers?  Will the spirit wilds come back into play or will they fade into the background?  How will our heroes rebuild the anarchistic Ba Sing Se after its fall?