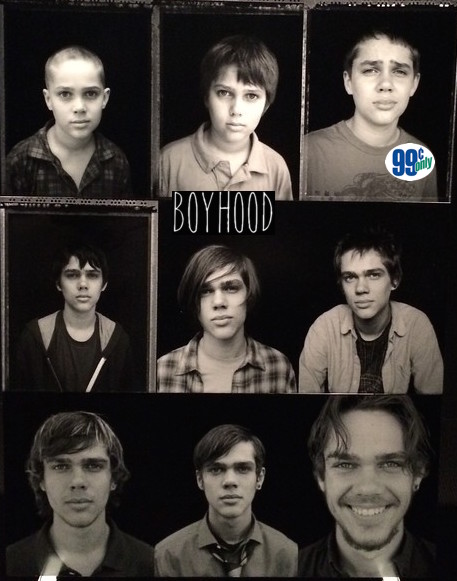 This week brings us one of the best films of 2014 (or any year for that matter), Richard Linklater‘s Boyhood.  As far as the story goes, it is actually quite simple – we follow an American family through the eyes of a boy over a 12 year period as he grows into a young man.  Simple?  Hardly.  Boldly original in it’s vision and startling in it’s scope and execution, Boyhood is a portrait of American life unlike anything that has been committed to film before.  You will not get more bang for your buck this week.

We first meet 6 year old Mason (Ellar Coltrane) as he lays in the grass staring up at the sky.  It’s a beautiful opening that sets the tone for who this kid is, and maybe who he wants to be.  Mason lives in a small Texas town with his Mom (Patricia Arquette) and his big sister, Samantha (Lorelei Linklater) – who torments him with precocious renditions of Britney Spears songs.  Mason is kind of a quiet kid who always seems to have a lot going on behind his steely blue eyes.   Things are relatively simple for the family until his Father (Ethan Hawke) returns to their lives after an extended leave of absence.  For the rest of the film, we watch Mason and his unconventional family struggle and change and grow over the course of 12 years.

It’s a film concerned more with the little things (like digging for worms behind your house or talking Star Wars with your Dad by a campfire) that happen in between the major life events and dwells endlessly on the beauty we miss in them.  Like I said, simple.

With such a straightforward plot, you may be asking yourself just what all the fuss is about.  First of all, if you are asking that, I would love to shake your hand as you may be the only human alive who did not have a complicated childhood.  But you may have merely overlooked a key point in that short synopsis…the one that states that the movie takes place over a 12 year span.

Inspired by films like Michael Apted‘s Up documentary series and likely his own Before Sunrise, Before Sunset, Before Midnight series, Linklater wanted to take a long, hard look at time itself. Not willing to rely on cheap make-up effects or re-casting key roles to show time progressing, the director took a wholly unique approach to Boyhood and decided to shoot the entire film over the course of 12 years with the same cast and crew.

Indeed, the cameras started rolling on Boyhood way back in May of 2002 with the last shot of principal photography coming in August of 2013…the production covering roughly 4,000 days (though only 45 of those are credited as actual production).  Still, the sheer scope of the project and the commitment it required from all involved is nothing to scoff at.  Lorelei Linklater (the Director’s real life daughter) even tried to quit the project about halfway through, telling her father to just kill her off.  This, however, was not the story the Director wanted to tell and he was eventually able to convince the younger Linklater to see things through to the end.

This is a film about a family, after all, and the finished product is sort of like watching a family portrait develop in a photographer’s dark room.  The developed picture only has the right effect if the whole family is still in it. 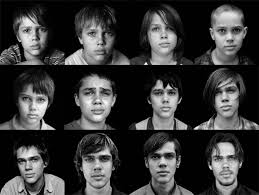 Think growing up isn’t hard?  Try doing it with the cameras rolling.  That’s exactly what newcomer Ellar Coltrane and company do in Boyhood.  Just take a look at those photos, they tell an intriguing story on their own.

Truthfully, the experience of watching these actors grow and age is like nothing you’ve seen before.  If you were to take the subjects of Apted’s Up series, or even the kids from the Harry Potter Franchise and condense their time into under 3 hours, you would experience those stories in a completely different way.  This seems to be what Linklater is counting on as we watch the action in 10-15 minute bursts.   There are no title cards here explaining the year has passed. The physical change is the trigger.  The changing face of young Mason shocks us into each new year before we can even register that the previous one has passed.

Patricia Arquette (Academy Award Winner for her work here) and Ethan Hawke bare all in their roles as Mason’s Mom and wayward Dad.  As established actors, this cannot have been an easy thing to sign up for with every passing year bringing a new wrinkle, a new gray hair or a few extra pounds.  Great actors take risks, though, and this one was clearly worth it.

Though the transformation of Lorelei Linklater from precocious little girl into a confident, fully formed young woman is equally remarkable, it’s Ellar Coltrane who steals the show.  Mason is the focal point of the story, and everything was riding on his shoulders.   While his physical change from cute 6 year old kid to handsome 18 year old man is nothing short of astonishing, its Coltrane’s emotional change that is most fascinating.  The boy becomes a young man, but it’s tough to see where the actor ends and the character begins.  Growing up in real time and movie time simultaneously clearly had a profound effect on him.  It’s in the way he talks, the way he moves, the way he thinks and the way he looks at the world.  He know things, but he understands that he doesn’t know enough.  The kid we met staring at the sky has moved from having questions to actively seeking out answers.  Given the circumstances, Coltrane has to walk a very thin line between his art and his life, but he walks it fearlessly and maybe ends up showing us a thing or two about our own.

The Man Behind The Madness

I should warn you that I am a devoted fan of Richard Linklater and have been since a lonely, middle of the night screening of Before Sunrise in my early 20’s.  He’s one of those rare filmmakers who truly understands how to establish the feeling of a specific time, a specific place and the immediacy of a stolen moment.  You don’t just watch his movies, you sort of live them.  Some critics claim that he is all substance and no style.  I would say that it isn’t so much that he doesn’t have style, it’s more that he completely invented his own.  With films like Slacker, Dazed and Confused, A Scanner Darkly, School of Rock and Before Sunset in his oeuvre, clearly style is a matter of taste.  What his films may lack in dazzle, they more than make up for in authenticity, which is the case with Boyhood.  There are scenes in Boyhood that almost feel too real.  We’ve been there in our own lives and it’s virtually impossible not to get wrapped up in the moments again.  Though it’s a film set in a specific time period, the time that passes feels universal.

If you need further proof of his particular gifts, take note that he directed no fewer than 10 films throughout principle photography on Boyhood, including many of the titles I mentioned earlier.  It’s staggering that he was able to keep a consistent look and feel through every moment of Boyhood given that workload. Factor in the ever-growing/changing actors and his work here is nothing short of miraculous.  Kudos to Linklater, Cinematographers Lee Daniels and Shane Kelly, and especially Editor Sandra Adair for facing a monumental task and making it all work.

Truly great films worry less about telling a story and more about establishing a feeling. Boyhood is one of those rare films that has the ability to make you feel and that is the sign of true art.  More than art, what Linklater captures is nothing short of life itself.

Boyhood is a truly great film, and I am wholly recommending you spend your dollar on it this week.  And when it’s over, maybe go call your Mom.