The iTunes $0.99 Movie of the Week: ‘Florence Foster Jenkins’ 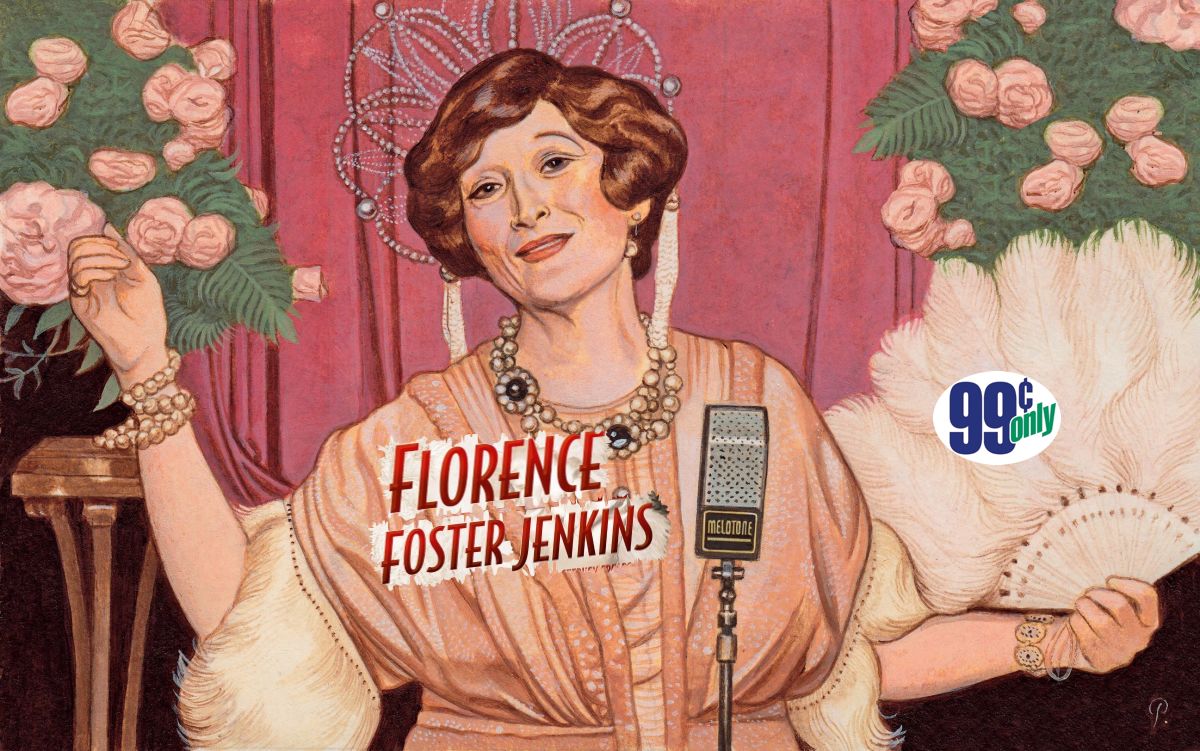 This week, Meryl Streep “sings” her way to another Oscar nomination in Florence Foster Jenkins.

People May Say I Couldn’t Sing

Florence Foster Jenkins (Streep) – heiress, socialite, patron of the arts – has a dream. She wants to sing opera. There’s just one catch … she’s one of the world’s worst singers. And she doesn’t realize it. But with the help of her devoted, enabling husband and a talented pianist, Florence may still fulfill her dream of singing at Carnegie Hall. Will her passions prevail? Or will she be the laughing-stock of the New York music scene? Those questions drive the laughs and the drama of Stephen Frears’ charming but slight biopic Florence Foster Jenkins. 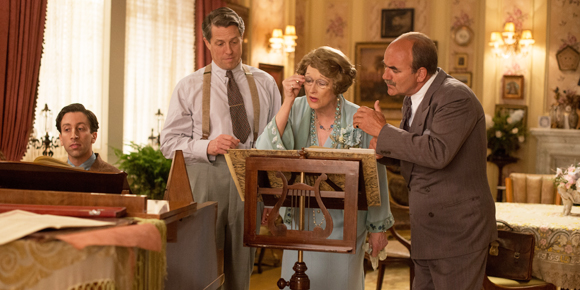 But No One Can Ever Say I Didn’t Sing

Frears & Co. never quite settle on answers to those questions. But then, they don’t really need to. In her own mind, Florence Foster Jenkins was a gifted singer. That’s all that really mattered to her. And that’s the whole point of the film based on the final chapter of her life.

Florence Foster Jenkins unfolds like a Shakespearean comedy crossed with The Madness of King George. It opens in New York circa 1944. Florence and her husband St. Clair (Hugh Grant) spend their days  putting on tableaux theater for the city’s upper crust, attending concerts, and raising money for the city’s music scene. Being part of that scene is the one true joy in Florence’s life. It’s only natural that she should want to become more than a spectator. Her talent does not match her passion. That single joke is the impetus for Frears’ entire film.

And it’s a hell of a good joke. The first time we hear Florence sing is an inspired comedic event brought to vivid life by the fervid energy Streep brings to the moment. The heiress has built the moment up by pronouncing her devotion to her craft. She’s hired a pianist (a scene-stealing Simon Helberg) to accompany her. And she’s enlisted the help of NY’s finest vocal coach. Then she sings. She sings so poorly we can’t believe our own ears. But damn does Streep sell it. Her Florence is passionate, confident, and genuinely happy to be singing. The vocal coach seems oblivious. Grant’s encouraging grimace bolsters the occasion. Helberg’s utter bafflement – and his delayed reaction – is the icing on the cake.

That is a genuine pity. Because the film has so much going for it up to that point. Streep is magnificent – even if her role is a little one note. Helberg is a revelation in his role as comic foil with a heart. And Hugh Grant gives the performance of his life as Florence’s deeply flawed but utterly devoted husband. Even the tragic information itself is a fascinating twist. The problem is that Frears & Co. still want Florence Foster Jenkins to be funny. But now we can’t laugh at the only joke they’ve presented. And the film refuses to fully embrace the intriguing bit of drama it’s dropped in our laps. What might’ve become a tragic but endearing tale of pure passion fulfilled sputters out in a wash of standardized, not quite funny, and not quite dramatic biopic plot points. And the biggest tragedy of all becomes just how much talent and effort and goodwill is wasted along the way. 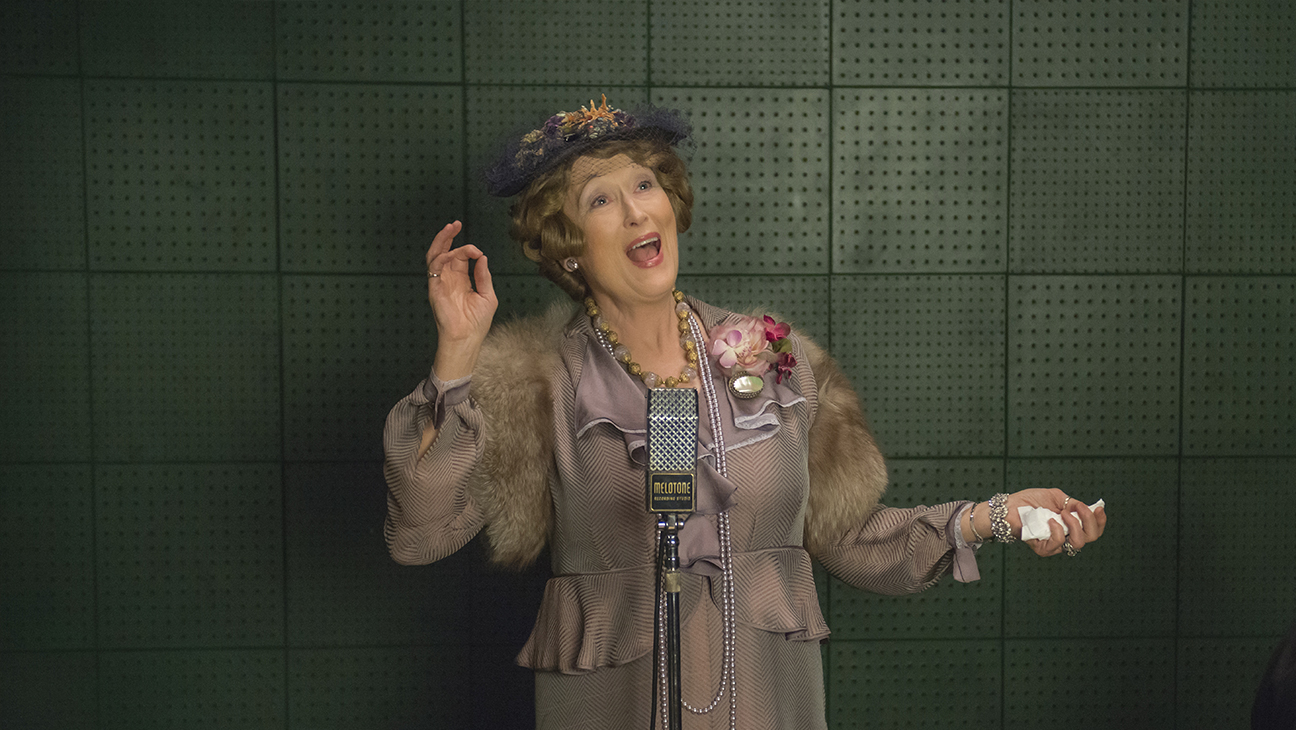 Look, I wanted to like Florence Foster Jenkins. I really did. It’s not a bad film. If you like Meryl Streep, you’ll probably love it. It’s beautifully acted and lavishly produced. But it’s a film at odds with itself. Once the central joke wears thin, Streep and her co-stars never really find anything else to do. She sings. They wince. We laugh. Florence Foster Jenkins comes off feeling a little too slight as a result. Everyone involved is better than the material. Their work deserved more. You do as well. So spend that dollar elsewhere this week.

If you’re dying to give iTunes your dollar this week, you might check out Barry Jenkins’ first film Medicine for Melancholy (2008). Jenkins may well win an Oscar this weekend for his luminous little drama Moonlight. Melancholy is where it all began for the director. It’s a gorgeous film. You can impress everyone at your Oscar party this weekend by telling them you’ve seen it. And it’ll only cost you a buck. Check out the trailer right here.

AirTV Combines Streaming and Local Channels So You Can Ditch Cable

Believe the Hype – ‘Get Out’ is Terrifying