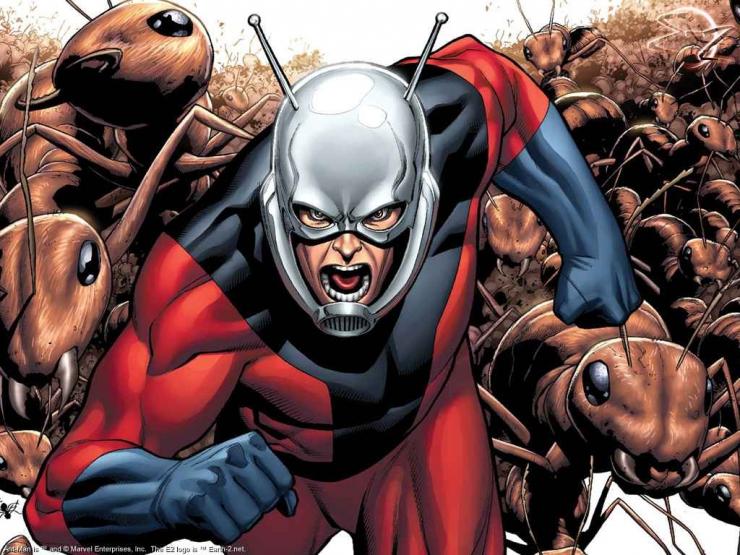 Oh my god, oh my god, did you see that picture Simon Pegg tweeted from the Marvel Studios? He’s totally going to play Ant Man in the new movie…maybe. In reality he just sent out a picture of himself in the Marvel Studios pointing to a poster of Ant Man. As a result the Internet blew up with theories over his role in the upcoming film. So is there really a deeper meaning to his tweet, or is the Internet just being the Internet again?

Simon Pegg is best known for his work alongside his good friends Nick Frost and Edgar Wright. They worked on a British show called Spaced together for years before moving on to the exceptional trilogy of genre mocking films: Shaun of the Dead, Hot Fuzz, and The World’s End. Given his history with Wright, it wouldn’t be all that surprising to see him at least cameo in the Ant Man movie. After all, nerds have some serious love for Simon Pegg and his work.

The real question is, is there any validity to the claim that he’ll be in it? As it stands there seems to be little to no evidence that Pegg will be appearing in the upcoming comic adaption at all, let alone as Hank Pym himself. After all he was just pointing at a poster that had a character that his good friend is making a movie about. Does it really seem that strange that he would be in that situation given that fact that he’s a nerdy movie star? While it does make for a great internet rumor that Hank Pym is going to be played by the same guy who brought Scotty to life a second time around, it seems like more of a coincidence.

Simon Pegg basically said the same thing to the Huffington Post in a recent interview. Explain that he was merely, “at Marvel doing a podcast and I had my picture taken with the Hulk and Thor. And then I was having my picture taken by the big mural and I was like, “There’s Ant-Man!,” because Edgar’s doing Ant-Man. So, I pointed at it and the next thing I know, it’s like “He’s Ant-Man!” I mean, grow up!“

To be honest, I don’t know that I could see Simon Pegg as Hank Pym anyway. Pegg, even when trying to be serious, just always has a goofy quality about him. I can’t picture him very well as the hyper intellect tortured by the existence of his own villainous robot creation (though that happened later). To be honest, even though I really really like Pegg as an actor, I’m more comfortable with Affleck as Batman than I am Pegg as Pym.

Since there is no evidence supporting Pegg in the upcoming Ant Man film, maybe Nick Frost will be in it? Most likely not. In that same Huffington Post interview he commented about the movie that he, “couldn’t give shit.” Going on to talk about how he would have beat up comic readers as a teenager.

So sorry fans, no Frost or Pegg in the upcoming Wright Ant Man movie. In reality it is probably just a result of a similar incident where Vin Diesel put up a picture of the Guardians of the Galaxy on his twitter for no apparent reason. Which of course it then turned out he would be a part of. Maybe we should all pay a little less attention to what celebrities are tweeting.