Help Children in Africa by Playing This Game 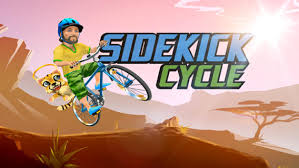 Have you ever wondered if you can use your phone to help out for once instead of just ignoring people or stalking them on Facebook? Well, now you can. The game “Sidekick Cycle” (Global Gaming Initiative) will help you do just that. The great thing about this game is that for every 387 sold, Global Gaming Initiative donates a bicycle to a disadvantaged child in Africa so he or she can go to school. So, why not get it, have a good amount of fun, and help kids in Africa at the same time? And at a price of only 99 cents, who wouldn’t want to help out?

The point of the game is pretty simple, collect coins and gears throughout the course, and then get to the finish line before a certain time. While doing this, you need to avoid a medley of rocks, logs, and hay bales. Sounds simple and easy right? Well it’s not, it gets very hard throughout the game. The obstacles seem to pop out of nowhere. Luckily all you have to do is tap the screen to jump over them. If you hold the screen, then you start doing backflips, which is pretty cool. The bike moves by itself, so you can’t control the speed, so it will get faster and faster. All the tricks you pull off, including jumping over obstacles, will make you go faster as well, so that doesn’t help the difficulty either.

A few cool things about this game are that as soon as you open up the game, you are immediately thanked for your support to the children in Africa. Half of the purchase price and half of the money from in-app purchases go to charity. A tracker is built-in showing you exactly how many bikes you’ve helped donate so far. You also get these neat sidekicks to help you out: one will attract coins for you, another will help you break through obstacles instead of jumping over them. But watch out! It only helps you break through one obstacle and then leaves you… I figured that one out the hard way.

The first pro about this game: before you even start playing it, you know that it’s for a good cause. You can feel helpful by knowing that you’re helping kids in Africa get to school by buying this game. Then you’ll notice how amazingly responsive the mechanics are, there really is no lag in between tapping the screen and your character jumping. Another pro: there is ragdoll, which I absolutely love! It’s just so cool because your character doesn’t ever fall the same way twice. So even when I wreck, I like watching my guy wreck. Final pro is that it’s very simplistic and doesn’t take too long to learn how to play. Given the fact that there is one control means that there is very little learning curve involved in the game.

There are really only a few cons that I’ve noticed with this game. First off, maybe the game controls are a little too simple for their own good. Because there is only one control to use during the game, you might wreck yourself for holding the jump button just a little too long. The fact that the iPhone can use tilt control means that there really is no reason not to include it. You can also buy sidekicks. The first one is somewhat cheap, a mere 150 coins, but then after that, it scales all the way up to 750 coins. It takes a while to build up those coins. Of course, like most games, you can use real money to purchase sidekicks, but I like to earn my keep by playing. There’s also not much to spend your coins on that helps you in the courses. Sidekicks are the only thing that help your biker in the game. I would also like to see stats, such as speed, rotation, and jump height. The final con I noticed is the ramps, which are a real pain in the butt. Often you will find that you didn’t jump at the right time on the ramp, so you either don’t reach the gear you wanted to, or you end up slamming right into the cliff you needed to jump on.

All in all, this is a very, very good game for it’s price. I personally love helping people out, so that compelled me to buy it even more. It’s very simple, which means that you don’t have to put a whole lot of focus on the game while you play it. There are a few things that it leaves to be desired, but I would still recommend this game to anyone who enjoys games on their phone and has 99 cents to spare.

How to Run Android on Your PC