The Hearthstone community is waiting for the first major change to Blizzard’s Hearthstone: Heroes of Warcraft. Named after the popular World of Warcraft raid, Curse of Naxxramas has an unspecified release date, but the new Adventure Mode will be worth the wait. As well as a new single player adventure full of bosses, the new mode will release a total of 21 neutral cards and 9 class-specific cards, and class challenges.

The adventure mode will have five wings that will unlock each week, over the course of five weeks. The first will be free to play, the players will then need to progress through the remaining wings after unlocking each one via in-game gold or real money. The Hearthstone Team has reassured us that the admission fee to each wing will be a realistic amount and feasible amount Players will be given access to the final wing after completion of the first four. The first four wings each contain at least three bosses each while the final wing contains two. Each boss has a card that is associated with them and players can earn these cards by defeating the boss. A new legendary card will be rewarded after the completion of each individual wing. Completing the class challenge will grant the player a class-specific card. The wings will present a variety of styles that the player will need to overcome. The developers created such a wide array of decks for the player to defeat in order to make the player step outside of their comfort zone as far as their deck style goes. Each of the 15 bosses has their own unique hero power. The only one revealed so far is Heigan’s “Eruption”, which deals two damage to the leftmost enemy minion.

The “Deathrattle” is an ability in Hearthstone that triggers when that minion dies. Curse of Naxxramas will utilize this mechanic in the majority of the new cards according to Hearthstone’s game director, Eric Dodds. Death will play an important factor in not only the new cards, but also with the bosses (Kel’Thuzad is a necromancer after all). The current state of the game has 465 cards, 11 of which contain a deathrattle. With Curse of Naxxramas, we should see big changes in the meta-game given the amount of variety and tactics that these new cards will bring to the table.

Along with all the new cards to enjoy, the Adventure Mode will feature a new game board that’s in keeping with the theme of Naxxramas. The board oozes with interactable things to click on while you fight through the wings. 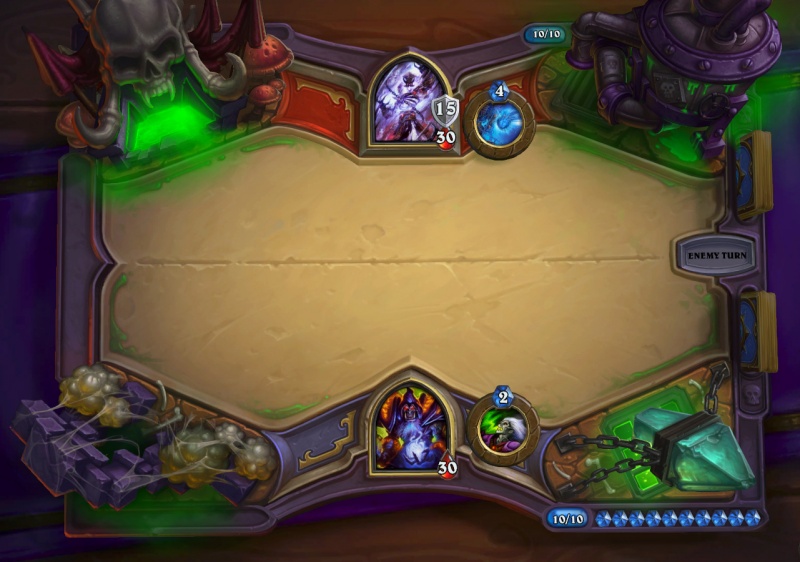 Courtesy of the Hearthstone Wiki

If you haven’t played Hearthstone, you’re in luck because the game is free-to-play for PC, Mac, and even iPad. The Hearthstone Team is also working on an Android version of the game so you’ll be able to build you decks and climb the ladder from anywhere you can reach Wi-Fi.