Most Hardcore Moments from the Walking Dead 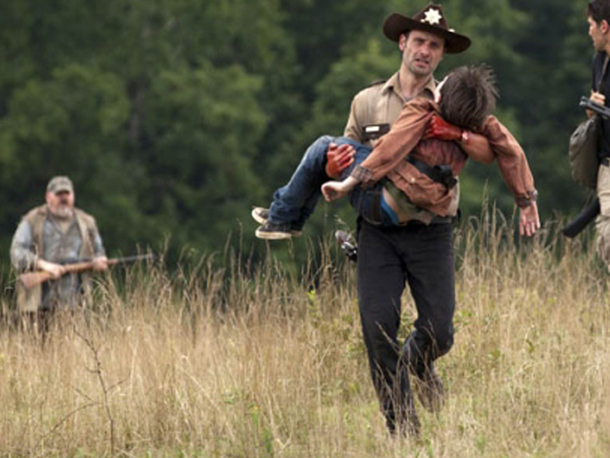 The Walking Dead, despite internet squabbling, is an incredibly intense show that is unlike anything else on television right now. Main characters die constantly and no one is safe. This makes hardcore moments that much more meaningful. Here are some of the most hardcore and intense moments from The Walking Dead. Obviously, there are spoilers up to the latest episode in this post! 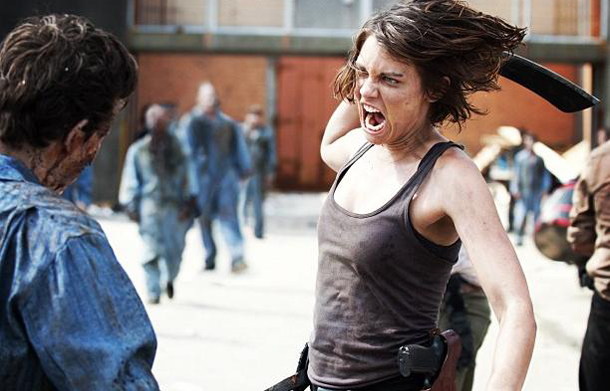 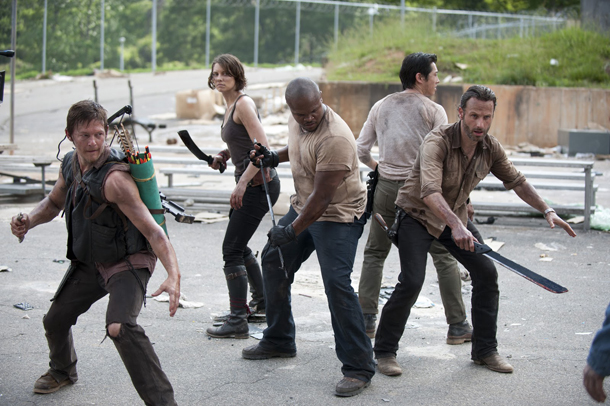 Is there anything more tense than shuffling down a dark prison corridor with only a flashlight to see by? Yes, encountering zombies at every turn.

Escape from the farm! 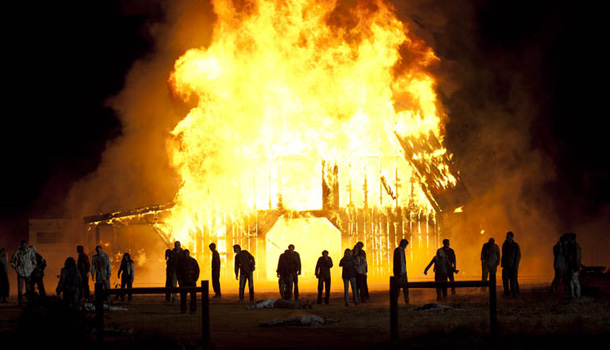 In the conclusion of this heart-pounding finale, Hershel attempts to protect his farm against a horde of walkers that followed the helicopter from the city. The group quickly attempt to save the farm and kill as many walkers as they can, but facing such a large number of zombies, they choose flight over fight and get the heck outta dodge–not without losses. Patricia is killed and Andrea is left behind (only to be saved by Michonne). 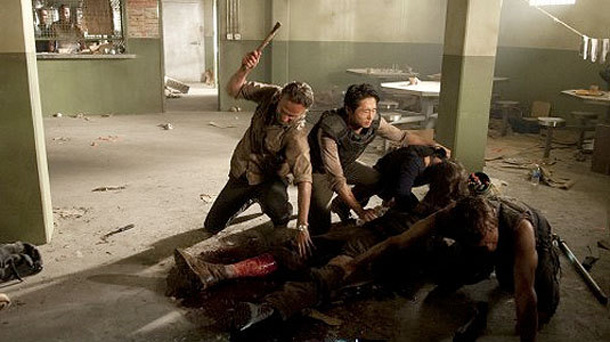 It seems like Hershel’s trademark is that well groomed beard and a pronounced limp, but he didn’t lose his leg until the first episode of season three. While on a scouting mission inside the prison, Hershel gets bit in the leg by a walker they all dismissed as “dead.” Rick instantly hacks of the limb with a hatchet and Hershel loses consciousness. This moment is so hardcore, that the prisoners watching from the other room are as stunned and horrified along with the rest of us.

Hiding from the highway horde! 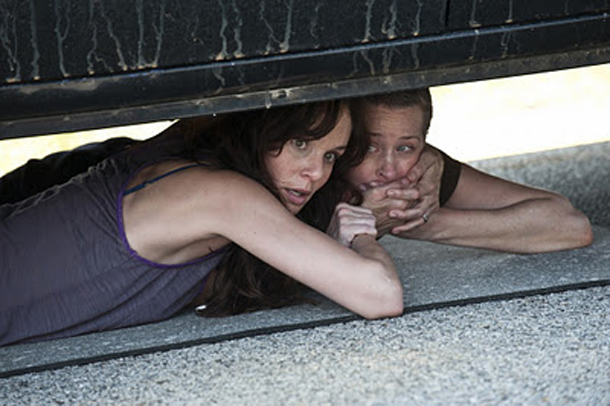 The gang encounters a herd while camped out on the highway. Rick ushers them under the parked cars and trucks. Lori tries to silence Carol while they watch their children cower in fear themselves. Just as they think they’re out of the woods, a few remaining walkers find Sophia and chase her into the woods. 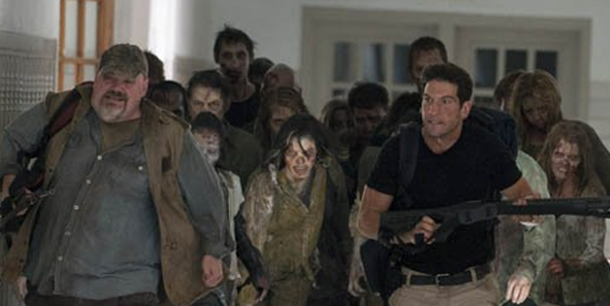 We have a bit more than an inkling that Shane is a morally questionable guy at this point in the show, but any ambiguity on that issue is squashed when he shoots Otis so that he can escape! To be fair, he was on a mission to deliver medical supplies that could save Carl’s life (Otis accidentally shot him while hunting deer). However, I’m not sure any other “good” character would shoot another protagonist in the knee to leave as bait.

Merle gets left behind! 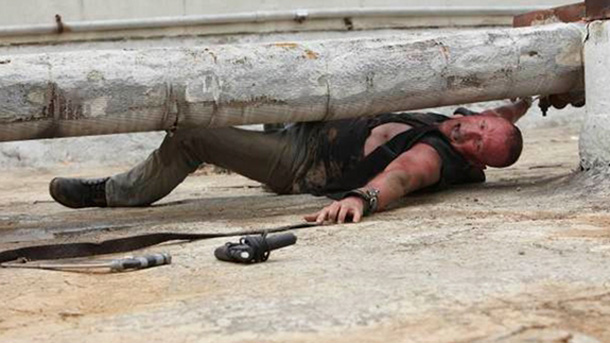 T-Dog drops the keys to Merle’s handcuffs, sealing Merle’s fate as zombie chow–or so we think. Sometimes it’s hard not to empathize with such an obnoxious and unlikable character, but as we watch Merle struggle for the rusty saw, it’s impossible not to root for him. Is there anything more hardcore than sawing off your own hand at the last second just as a gang of walkers is about to descend upon you?

Hiding in the tank! 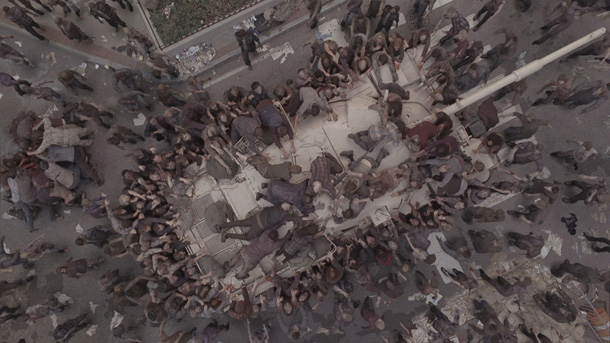 This is Rick’s first encounter with a giant horde of zombies. He gets a glimpse of a short, grim future as a group shreds his horse in minutes. He crawls under the tank to escape, and when he sees there’s no way out, he apologizes to his family and almost commits suicide. A moment before pulling the trigger, he sees that the hatch on the bottom of the tank is ajar and he scrambles inside. He has a friend in there with him, who he promptly kills and temporarily deafens himself. Reliving the pilot is tense and amazing.

When we see Carl get shot, we see a hunting accident–not a zombie-verse horror. Most of the other hardcore moments, have me peeking between my fingers in fear. In this moment, I saw and felt the panic of a parent trying to save his child. Even after all the horror and gore, the scene where we see Rick running to the farm with Carl, limp in his arms, is one of the most memorable and haunting moments of the series. 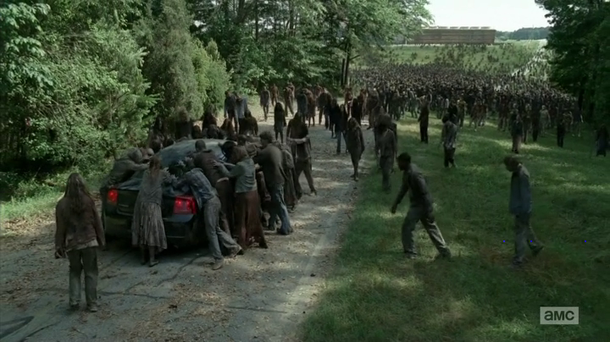 Leading up to this scene, we felt the claustrophobia and helplessness of facing a relentless zombie herd. However, nothing compares to the scene where we see more than 7000 zombies (according to the director). Not the prison, not tanks, not anything really, can help them take out that many zombies at a time. This scene has left so many questions in our minds. Without a doubt, these zombies could flatten all the prison’s fortifications. They almost lost a fence to a couple dozen zombies in the previous episode. Could the survivors fortify the prison building itself to withstand a horde passing through, or will they be forced to flee again halfway through this season?

It is hardcore enough that Lori goes into labor and starts hemorrhaging while there is a perimeter breach and zombies are leaking into the prison. It’s even more hardcore that Maggie has to perform an emergency C-Section on Lori while they hide in the boiler room! It’s hardcore enough that Carl has to watch as his mother is eviscerated, but it is supremely hardcore that Carl must shoot his own mother in the head to prevent her from reanimating as a walking corpse. The effects on Carl are almost instantaneous; what innocence was left in Carl is gone, and in a moment he goes from lost boy to dark, troubled young man. This moment was originally farther down on my list, but after re-watching the scene and reflecting on Carl’s behavior in the newest series, this moment is indisputably the most hardcore.

Apple vs Samsung | The Battle for China