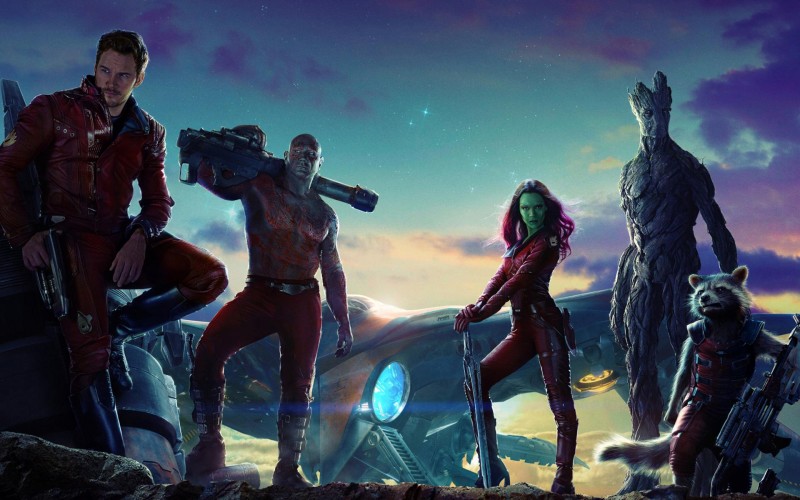 Now that we’re in the sweltering month of July full of burgers, beer, and freedom, we’re just less than a month away from the debut of Marvel’s Guardians of the Galaxy. With some heavy hitting names like Bradley Cooper and Vin Diesel alongside television favorites like Andy from Parks and Recreation and Bautista in what could be Marvel’s biggest gamble after a box office win streak, it seems like everyone from the Marvel executives to the devoted fan base are eagerly biting their nails in hopes for a successful blockbusting launch. The Chris Pratt led sci-fi ensemble won’t just be guarding the galaxy, but rather the entire Marvel Cinematic Universe. There are but three options at this time.

Imagine the theatres now. Strong draw for families given there’s a raccoon with a giant gun and a former WWE champion battling aliens and whatnots. Then imagine a film full with laughter as seen in every Marvel property, with the exception of Norton’s Incredible Hulk, and the crowd it pleases ranges from 18 to 40. It’s a movie that Mom or Dad will enjoy, a joyful date will remember, or a night with friends can live. With this equation the film is bound to succeed.

What follows after the Guardians is a testament that Marvel can do no wrong. Soon more characters will flood the silver screen and Marvel Studios will be branded as a platform for smaller actors to flourish, like Pratt in his first lead, or struggling actors to revitalize their careers, as Downy did with Iron Man. Everyone from writers to actors to corporate head hunters will be looking to establish their careers with the multi-billion dollar company. Marvel will be a standard household name comparable to Warner Brothers and Disney, but one that can draw audiences on its own like Pixar. With films slated to stretch up to 2028 the next decade will be brisk for the studios given the steady flow of success.

Now if the film debuts and doesn’t even break 100 million but fares decently well overseas, then Marvel can cut its losses and disregard the sequel. Cooper and Diesel’s careers are still alive given that they’re CG characters and have projects expanding from dramas to action flicks. Bautista will fall back to lower budget B films and Pratt can continue rom-coms and prime time television.

Marvel’s name won’t be too tarnished given their record breaking success with the Avengers and franchises like Captain America and Thor escalating in each installment. Though interstellar themed movies will be unadvisable Marvel will continue to rely on more earthly bound characters and even possibly the spiritual realm led by Dr. Strange. Future characters that are difficult to market, like Warlock, the Immortals, or even a Planet Hulk storyline, will be shelved for a later date; or never.

We’ve seen 2011’s Green Lantern drive DC’s ambitions for a space odyssey into the ground. While Man of Steel was able to pick up the pieces the Lantern’s failure has thus affected future plans for a collaborative Justice League that ventures to space and beyond. With the exception to Star Wars, and the recent Star Trek franchise, selling sci-fi is a gamble that hasn’t always paid handsomely.

But there is another stark outcome at hand. Franchise fatigue has already claimed the recent Spider-Man films. It’s possible that the populace will grow weary of these superhero adventures, whether they be Marvel or DC, and it could very well start with the Guardians. If GOTG was to fail in epic proportions, at the level of a box office flop, then Marvel could go in a hiatus until further notice. That means Ant-Man, Dr. Strange, and even Captain America will be placed on the backburner with Avengers: Age of Ultron in motion to recoup the loss.

Either way it ends, it begins with me buying tickets for my family and about eight or so of my closest friends. We’ll sit and drink and wait patiently in our comfy chairs to be entertained. Will you be at the theatres opening day or reserve this one for a Redbox night?