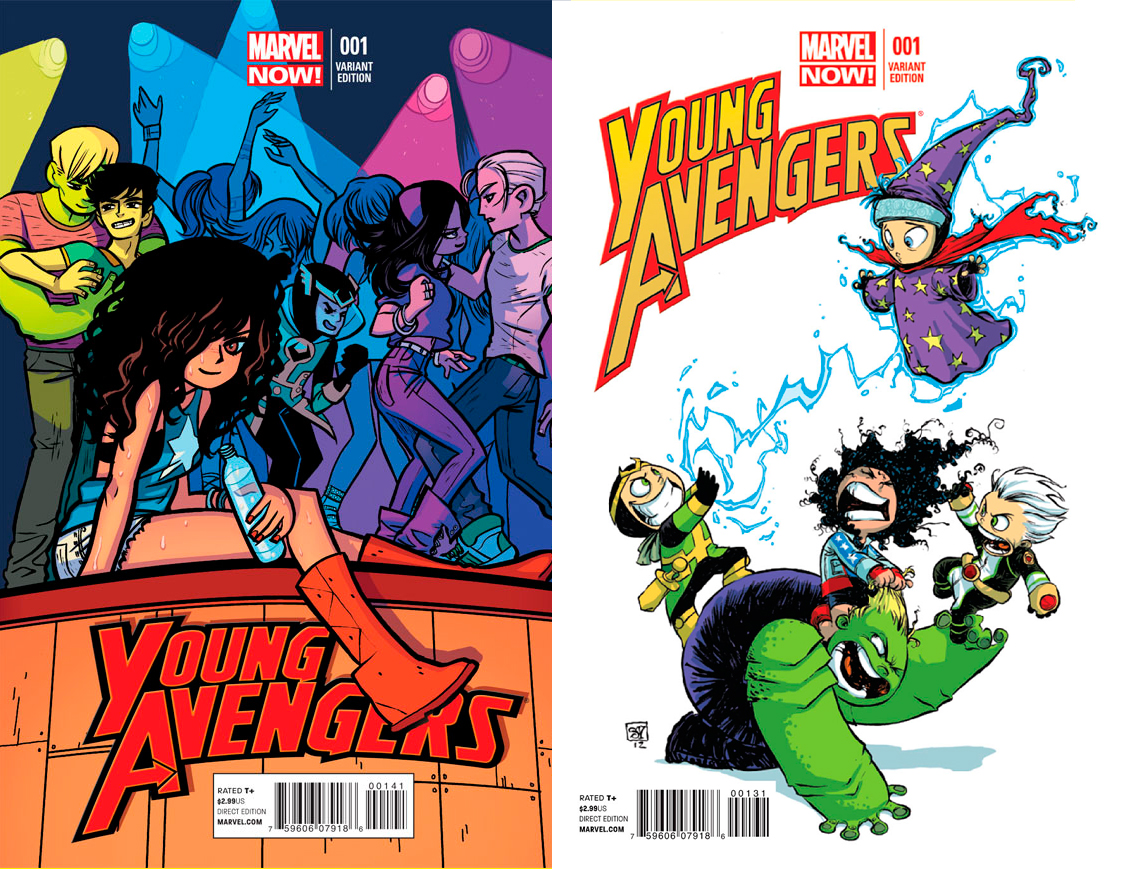 How titles such as Hawkeye and Young Avengers are redefining how we experience sequential art, and why the industry should take notice.

Welcome to “Graphic Content”, a weekly feature where I discuss my thoughts on comic books and graphic novels (old and new), and the industry in general.

In my last column, which was paradoxically my first column, I indulged in a bit of a rant about how many comics still adhere to tired and formulaic plotting, and why. There was some discussion about a few titles that are bucking the cliches with inventive new approach to sequential art storytelling.

The latter has become a muse for writers at Marvel, it seems, as she also features as a member Kieron Gillen and Jamie McKelvie’s outstanding Young Avengers, which I’ll be discussing in this installment. 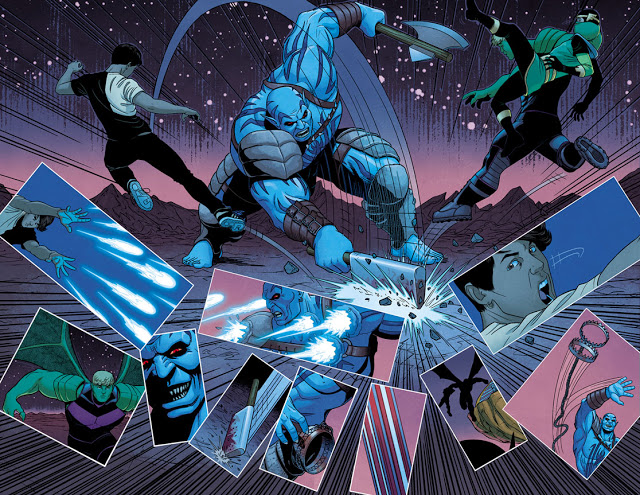 On the surface, this title seems like a fairly typical comic series.

A team of teenagers with superpowers band together to fight the forces of evil and forge their own paths. The teen-heroes-on-the-run trope is not particularly new, featuring in various titles of the last few decades, from Gen13 to Runaways.

Though beyond the former title’s reliance on over-sexualized jailbait to sell copies, it was fairly generic13– err, generic, when it came to plots. 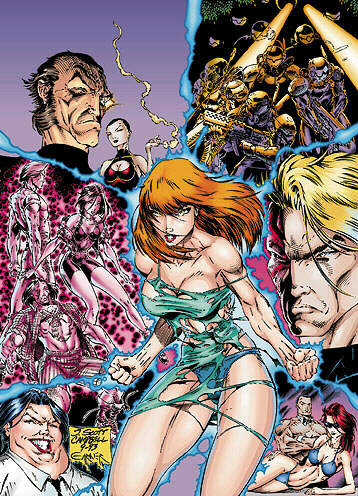 Fans swear they only bought it for the dialogue…

In the hands of Gillen, even oddball characters like Noh-Varr/Marvel Boy come off as real, distinct people. Most writers who have used the character gave him Generic Monotone Alien Voice 1, excising the quirks imbued in Noh Varr by his creator, the great Grant Morrison.

Even with such a dated reference, that still sounds, well, awesome.

Each character’s dialogue displays Gillen’s wit, but he also gives them unique voices. This is rare in my experience, as many writers with knacks for snappy dialogue fail to distinguish the individual, leading to lines being near-impossible to distinguish between different characters.

Also to Gillen’s credit, despite my mixed feelings about some plots and antagonists (the whole “Mother” thing feels both a bit too on the nose as a metaphor, and more of a convenient plot device than anything), I still find myself impatient for each new issue. This is solely due to the strength of the cast, and the amazing characterization they’re given by the writer.

Despite being a huge X-Men fan, I really was not sold on his run on Uncanny X-Men.

But with just one issue of Young Avengers, Gillen sold me on his talents as a comic book writer, also making me feel compelled to read his Journey into Mystery, starring team member Kid Loki.

Though I tend to focus on the writing when it comes to any form of media, there’s no denying that Jamie McKelvie’s amazing artwork is integral to what makes this book shine.

Though many pencilers have tinkered with the formula of panel layouts and design, none come to mind that have so willingly embraced the concept of using those very panels as a story element.

But don’t take my word for it. See for yourself: 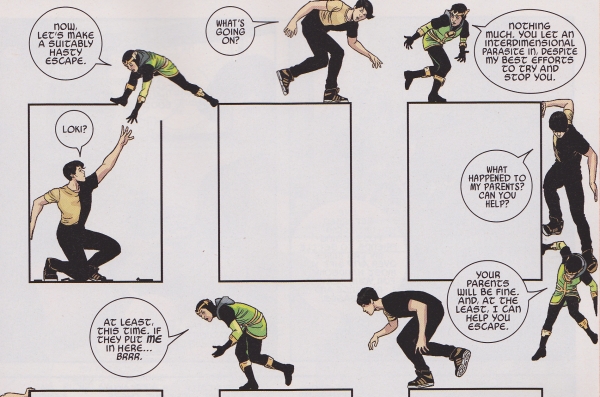 Tell me that you don’t think that is sort of neat, and I will call you a liar. 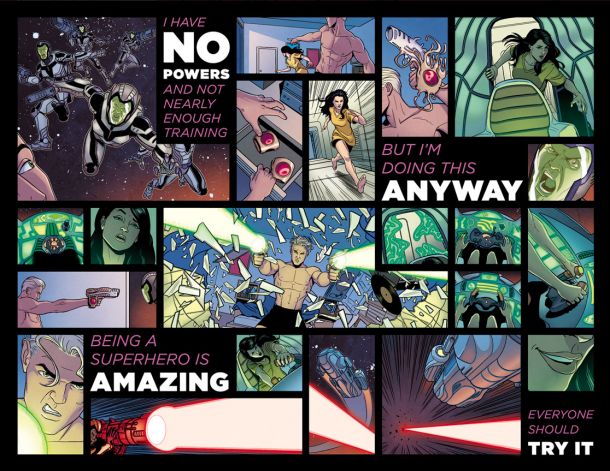 This splash page from the first issue was when I knew that there was something special about this book.

The creative team augments Young Avengers’ fresh look by embracing the new media outlets and technologies vital to Millenials, even super-powered ones.

Re-cap pages are presented as Tumblr knock-offs. Exposition pages highlighting the team’s adventures between issues are a series of Instagram posts. Other pages emulate flyers for indie concerts.

And Gillen/McKelvie’s style of hybrid comics doesn’t end there.

In scenes full of frenetic action, illustrators tend to break down each beat into separate panels. In a recent issue, where Noh-Varr leaps guns-blazing into a nightclub to rescue his allies, McKelvie did the opposite, making the sequence a single diagram, complete with numbering, to showcase the action. 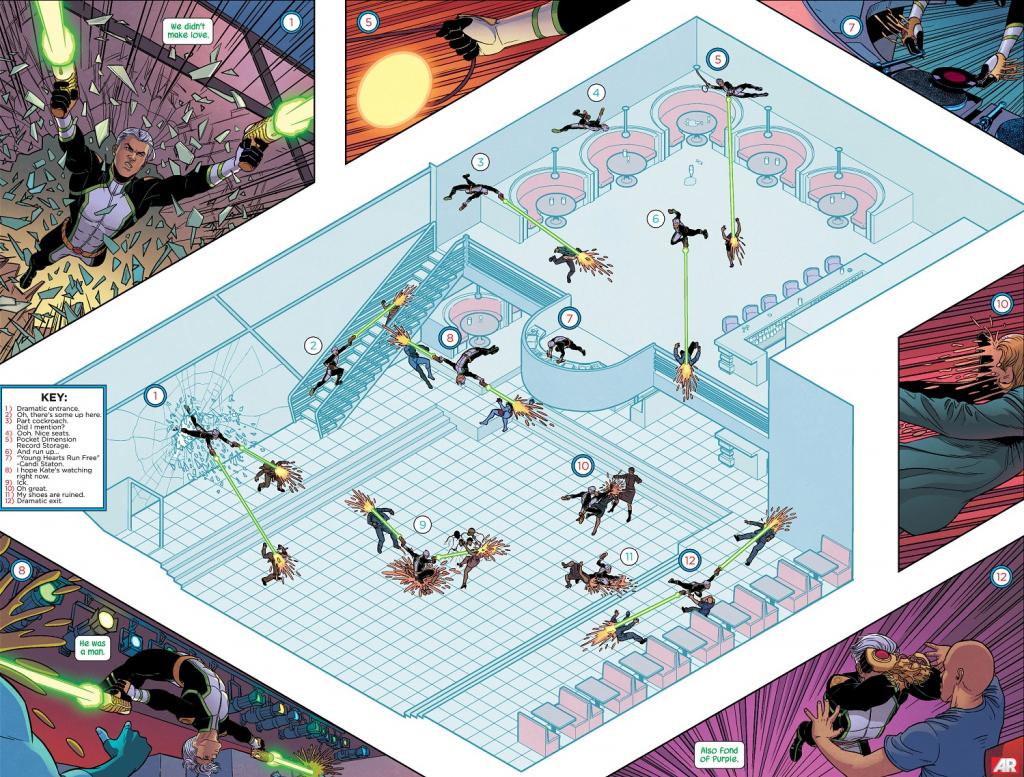 If that doesn’t make you believe that the format can still surprise and innovate after a century, I don’t know what will.

While this self-aware postmodernism may not be everyone’s cup of tea, and shouldn’t be incorporated into every comic book, such careful and creative storytelling gives me hope that I made the right choice in coming back to the comic reading fold.

The 10 Sexiest Women in Genre Television