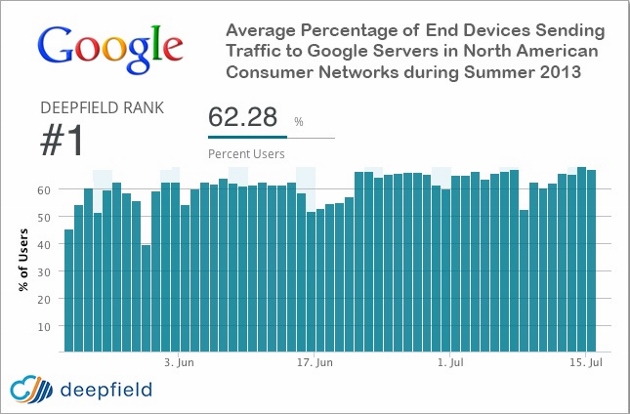 During the past month, Google broke an internet record. A recent study by DeepField, an analytic firm, showed that Google accounts for about a quarter of all internet traffic in North America (and they grew fast: in 2010, they were only at 6%). At first, I found this quite unbelievable. But the facts prove it, and I do have to admit, I do use Google pretty much every day.

Google Snags 25% Of All Internet Traffic

DeepField stated that it was the largest ongoing study of its kind; data was collected from North American Internet providers and it covered approximately one-fifth of the Internet traffic throughout the region. The survey took note of home consoles, media appliances, computers, mobile devices and other embedded devices. According to the results, Google takes up more time in our life and browsing history than Netflix, Facebook, and Twitter combined. See, hard to believe. I mean Netflix…really? DeepField explained that although Netflix does use more bandwidth than Google, the videos peak solely during the evening prime-time hours, unlike Google, which averages a larger chunk of Internet traffic throughout the full day.

And, even more surprisingly, Google is growing faster than the actual internet as a whole. In 2010, Google represented just 6% of internet traffic, but now, due to the increased usage of smartphones and internet-connected devices, Google is constantly being used throughout each day. The DeepField study showed that 60% of all devices using the internet interact with Google servers each day. That number includes gadgets like home media devices and game consoles, along with the obvious smartphones. Google’s strength of presence comes largely from mobile devices, as the company holds the largest chunk of the smartphone and tablet markets with its android devices. Those smart devices check in with Google for updates throughout the day. Craig Labovitz, of Deepfield, stated, “While it is old news that Google is big, the sheer schale and dominance of Google in the Internet infrastructure has significant implications on network design and evolution.” Even Apple, the smartphone runner up, uses Google as a default search engine. They’re too big for even their competitors to avoid them!

It’s not simply luck or been easy-going. Google has had to put in a lot of work to keep up with the heavy traffic. They have had to build up their server capacity to handle the influx of users and have spent more than $1 billion each quarter over the past few years. Liz Markman, a spokeswoman for Google, commented that the server improvements allow Google content and services to better reach consumers and deliver data-heavy streams (like YouTube videos) more efficiently.

In Craig Labovitz’ blog post, he commented, “By far the most striking change in Google’s Internet presence has come with the deployment of thousands of Google servers in Internet providers around the world.” These cache servers store popular content from Google’s network and serve it right to the ISP’s data center. So viral YouTube videos or top news stories are stored, and the amount of distance the content needs to travel is reduced, so it can pop up super quickly on a user’s screen. Google has deployed these servers to the majority of Internet service providers in the U.S.

Google is smart, getting involved everywhere and paying attention to the details, and because of this, they are growing rapidly.  “While big data center construction projects and Google Fiber have dominated the headlines, far less attention has focused on Google’s growing and pervasive dominance throughout the underlying Internet infrastructure and economy. For example, Google analytics, hosting, and advertising play some type of role in over half of all large web services or sites today based on our ongoing study,” Labovitz also wrote.

Google is on that next level. Will anyone catch the internet giant, or will Google be forever king?