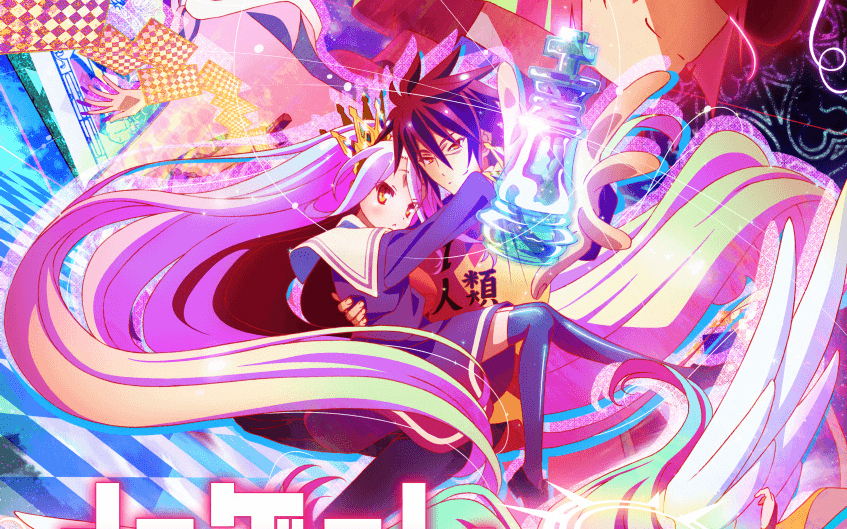 When Sword Art Online bursted into the scene with its high-stakes, video game influenced story, a surge of both new and returning anime fans came into light, and a new hit was born. Now, with the second season looming just around the corner, here’s a more light-hearted game-influenced anime that is sure to keep your appetites full before Sword Art Online 2’s premiere on July 5, 2014: No Game No Life!

No Game No Life was adapted by Madhouse into an anime series and premiered on April 9, 2014. A story of two NEETs (Not in Education, Employment or Training), collectively called Blank, they have built a legendary reputation for being undefeatable in the virtual game world. They are sucked into another world ruled by Tet, the God of Games. This new world is not quite as violent or action-packed as Sword Art Online, but it will have your adrenaline pumping and laughing out loud as siblings Sora and Shiro strategize their way to rebuild the falling Kingdom of Elkia, home of the muggles magic-less humans of Imanity.

Tet came into rule by default after an eternal war broke out in this alternate reality where the other gods fought and destroyed each other. As the One True God, Tet formed the Ten Oaths and separated the races of Exceed into 16, giving birth to the world of Disboard. Violence was abolished as the Ten Oaths bound the Exceed to play games to decide or win anything from money to even the right to rule! Meanwhile, the Kingdom of Elkia has had to submit to being the bottom of the barrel as the race of Imanity lacked the capability to win games against the other magically advantaged races.

If you like stories about the underdog, watch this. But unlike storylines where the underdog characters progressively develop into Super Saiyan-types, NGNL has brought us two main characters that are always one step ahead (sometimes even a whole marathon ahead) of the game throughout the series. It may sound like a boring lack of character development, but instead, you as the viewer find yourself being the one to be sucked in and realize the power of bluff, strategy and most of all, kawaii! As the series progresses, you join the self-doubtful, self-pitiful Imanity as you are constantly reminded of how powerful the other races are and how weak being a muggle a human without magic is. However, Sora and Shiro find a way to surprise and encourage the viewers and Elkia that hey, they got this. They don’t need no magic because knowledge is power. Plus, Blank never loses.

Suddenly, you are no longer watching a show about the underdogs striving for survival; instead, you have underdogs conquering the world.

It makes you think

NGNL is an intelligent series that has a way of making you excited to think, so those who appreciate game theory and statistics may just fall to their knees watching this show. I have found myself replaying each 24-minute episodes multiple times to fully understand some of Sora and Shiro’s intricate strategies. While the games involved in the series could be as simple as rock-paper-scissors or a coin toss, the way Sora and Shiro think through their every move make you really sit at the edge of your seat in wonder of how they were getting out of this. Eventually, you learn to ask yourself, “What have they thought of now, and what detail did I miss?”, and you observe the episode like heck to predict what strategy they’ve come up with. Once their strategies are revealed, the underlying fun part about watching this 12 episode show is replaying the episodes in a whole new view, finding those details you may have missed while Sora and Shiro sneakily win their way into your hearts.

It makes you laugh.

Nevertheless, despite its advanced logic and gameplay, NGNL’s slapstick and use of typical anime tropes make the show hilariously funny. There are plenty of panty shots and jokes played on being a geek virgin, but they are none too distracting. Instead, for those that regularly play games and watch anime, they may find themselves relating to Sora. Who wouldn’t be excited to go to an alternate world and find themselves surrounded by cat and winged women?

This show is able to balance both silly, immature jokes and logic, making it all the more exciting. The story has a way of blending smart and funny that nothing ever feels forced, making the 24 minutes each episode definitely feel too short! Unfortunately, NGNL really likes to leave cliffhangers for each episode. Fortunately, it has wrapped up its first season already, so you’ve got the advantage of binging on this suspenseful, omega-kawaii ride.

Visually, the artwork looks like it’s being constantly filtered with fuchsia pink, but this choice of style makes NGNL instantly recognizable and oddly makes its characters extra cute. The series is certainly not afraid of color, as NGNL likes to use bright, neon colors. If you like to have your screen in maximum brightness and highly saturated, you may want to wear sunglasses in watching this show.

There are plentiful of lolis and full-figured women, and if you watch to the end, you may even find what Planet Fitness calls a lunk. And yes, Sora’s sunken eyes from playing video games all day and night are there to stay.

Finally, as a segue into SAO2, you’d be happy to know that Sora is voiced by Yoshitsugu Matsuoka, the same voice actor as Kirito.

There’s only a few days before the SAO2’s premiere, but if you have time to start this appetizer before the premiere, you may find yourself with another entrée you can’t wait to have seconds.