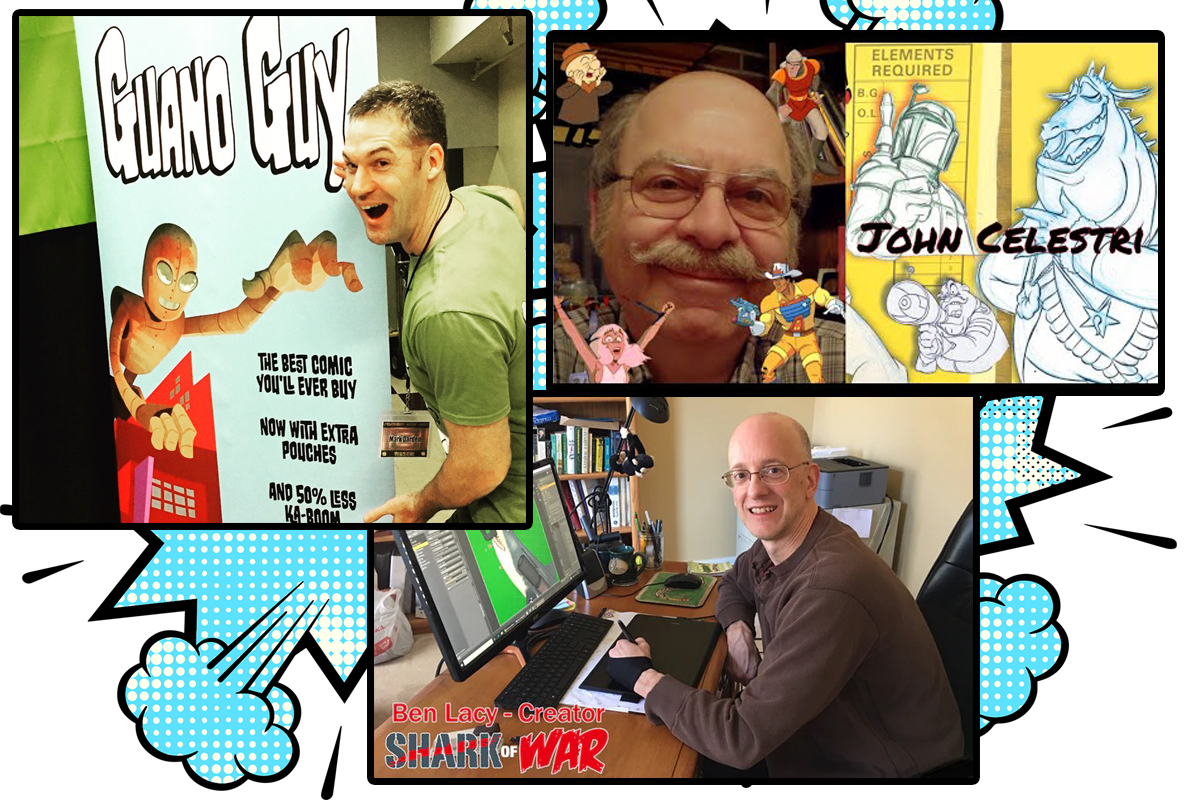 On Thursday, September 10, 2020, we had the pleasure of sitting down with comics creators John Celestri, Mark Darden and Ben Lacy. Though their work is vastly different, their stories appeal to a broad audience. Now, it’s one thing to get press releases and promote people and products but it’s a whole other dynamic when we get to sit with people in their given industry to talk shop, promote their wares and get insight into what makes the content creator tick.

Here are some highlights of our show

When asked about the genesis of Snuffy & Zoey, John Celestri shared that these are characters that he’s been drawing for 40-some-odd years and representative of notes he made to his wife, which always included a bear. That made me love the characters all the more! Snuffy & Zoey are sibling bears that jump into their magic toy box and go on wondrous adventures. Celestri’s books encourage young readers to create their own stories and harness the power of a wonderful imagination.

Things you may not know about John Celestri… Chances are, if you’re Gen X, you’ve seen or experienced much of John’s work. He’s animated the iconic Boba Fett in the Star Wars Holiday Special, and many other cartoon shows of the 70’s and 80’s. These include Filmation Studio’s He-Man, She-Ra; and Don Bluth’s Dragon’s Lair and Space Ace video games.

He has all-ages books like Snuffy & Zoey and Mega Moose leans more toward the growing pains of older children and teenagers. And how can you resist a title like: What Do You Do With A Stinky Pirate?

We cannot believe that original Boba Fett sketches are still available on IndieGoGo. And I thought a bunch of our geek fandom were #StarWars fans!

We could go on and on but we hope to sit with John Celestri again and dive into his original works, animation career, and love of comics. In the meantime, definitely check out his crowdfunding campaign and visit his YouTube channel where you can learn to be a better animator.

Serving nine years as a military aviator and qualified for Special Forces before his career was derailed by injury, Mark looked to art, pursuing an education in graphic design, finding employment in the board and card game industry with works in AEG, Chaosium, and Fantasy Flight Games (Infiltration, Nexus Ops, and Masques).

Guano Guy evolved from a webcomic series called “When Claws Were Cool” and now Mark is taking every opportunity to engage with comics fans. His Kickstarter launches on September 15, 2020 – hit the notifications button so you know when it goes live.

Ask Darden how to describe Guano Guy and he’ll tell you he’s like Seinfeld with superpowers; a sarcastic anti-hero who uses witty banter and often finds himself saving the world from crime for all the media loves – and not getting any.

Curious about Guano Guy? Visit Terraform Comics where you can download Issue 1 – Dude, Where’s Your Getaway Car? for FREE. Then head over to Kickstarter and give Guano Guy some love. Okay, okay, maybe be doesn’t really love you, but Mark Darden sure does.

An engineer, having worked on nuclear reactors, chemical factories, fuel cells, and gas turbines, he takes his engineering knowledge and came up with Shark of War’s propulsion.

Not knowing how to draw but having a strong desire to create comics, he combines a hybrid style of 3D modeling with digital drawing for Shark of War. In a really quick pitch to describe his books, Ben says “It’s Jaws meets Robocop.”

My first impression of Shark of War was – What am I looking at? – but I have to admit that it’s grown on me – an acquired taste and appreciation, not only for the craft of making comic books but because Ben Lacy actually has a well-thought and interesting story to tell. The more I see Ben’s art and animation, the more I’m excited about what he’ll present next. Lacy is ready to deliver Issue 2 Shark of WAR – A Parade of Piranha and already working on Issue 3.

Watch the Replay of Geek Speak