Kickstarter has opened up an opportunity to any and all aspiring creators, artists, directors, and people who need crowd-funding to push their project from dream to reality. Since launching in 2009, over 6 million people have joined this popular crowd-funding site, pledging over a billion to 67,000 projects. In 2012, it expanded to cover the UK as well.

What does this mean for you? Can you put up your project and find your dreams being crowd-funded into success? Statistically, your project has a 56% chance of failing. Pretty miserable. But if your project manages to get 20% funding, its chances of failing drop to 11.3%. It all depends on your dedication, organization, and, of course; your campaign. Always a faithful companion, Geek Insider has the tips to help you succeed. We’re cool like that.

First, you’ll need an account on Kickstarter. This takes all of ten seconds, requiring an email, your name, and a password. 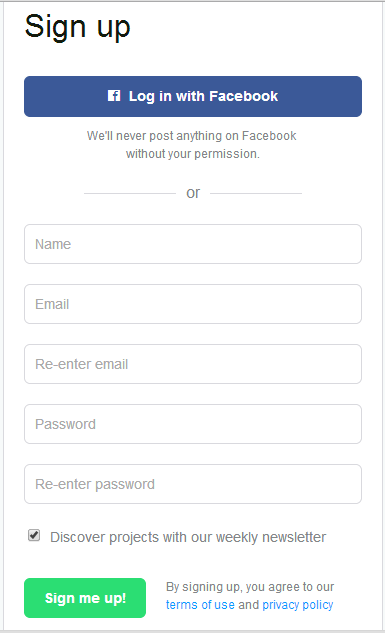 Next, make sure your project meets Kickstarter requirements. They have thirteen categories; Art, Comics, Dance, Design, Fashion, Film, Food, Games, Music, Photography, Publishing, Technology, and Theater. They have a list of prohibited items, as well as three rules; 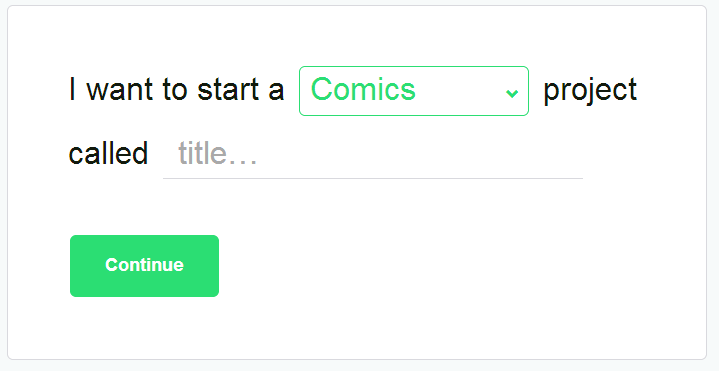 After determining if you can meet these three rules, then there are a few steps to take for creating your Kickstarter.

Once you have all this set up, you can submit it for Kickstarter to review. If approved, then your project will go live. About 1 in 4 projects are rejected 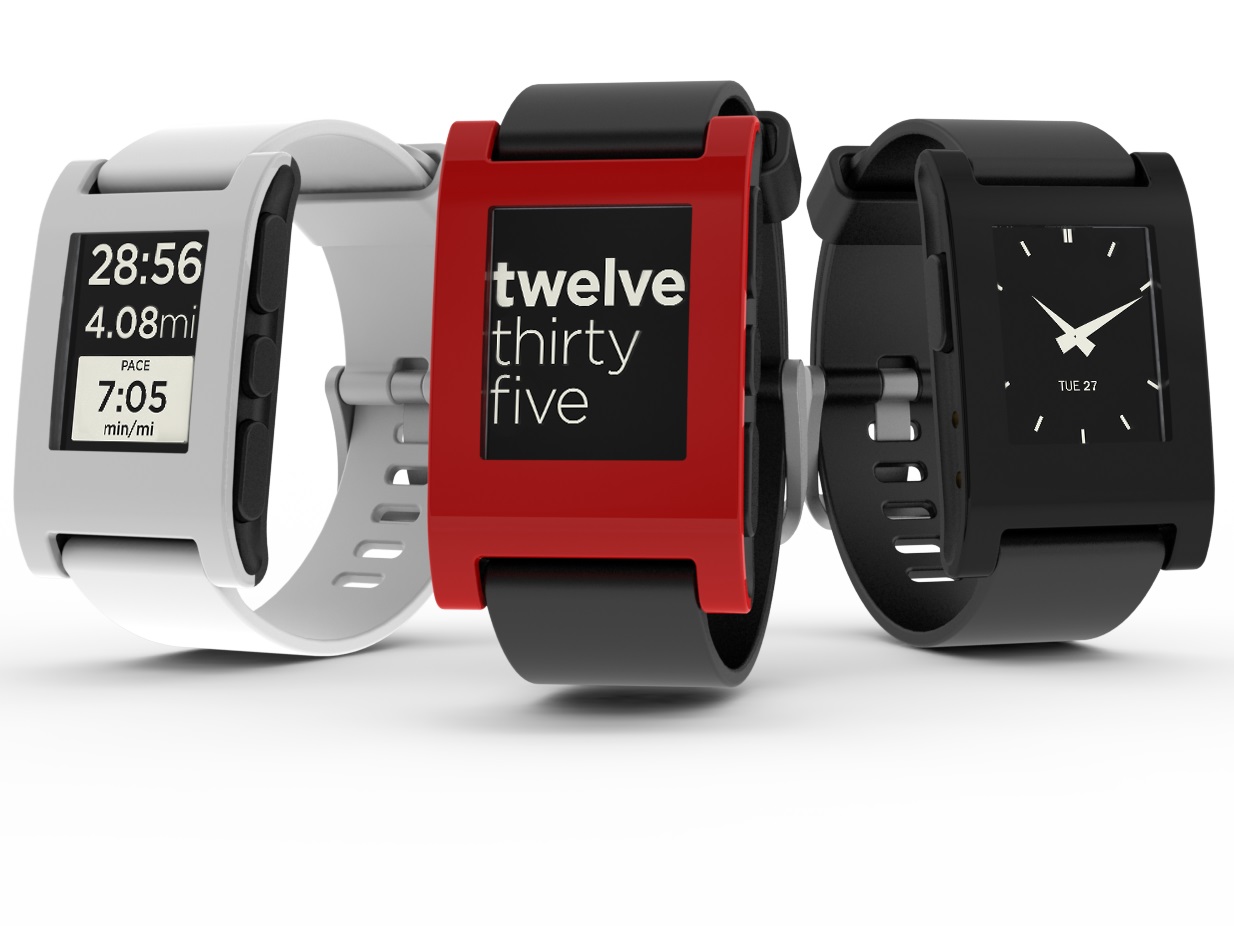 Let’s look at the one and only Kickstarter project that got ten million dollars in crowdsourced funding. In 2012, Eric Migicovsky had a prototype of the “first watch built for the 21st century” called the Pebble, which is “infinitely customizable, with beautiful downloadable watchfaces and useful internet-connected apps.” Unfortunately, he was finding that private investors and venture capital firms were reluctant to invest in his project. Migicovsky had to take matters into his own hands and he did this by launching a Kickstarter campaign. His goal? Raising $100,000 in 38 days. What happened? It took just two hours to meet that goal.

Six days later, backers had pledged another $4.7 million. After the 38 days was up, the amazing Pebble watch had gotten $10.2 million in funding, making it the most successful campaign in Kickstarter history.

What made the Pebble E-Watch so successful? The product itself wad sleek, innovative, and useful. But Migicovsky and his dream team also did an amazing job shaping and crafting their Kickstarter.

An In Depth Look

Let’s look at Migicovsky’s Kickstarter and why it was successful. 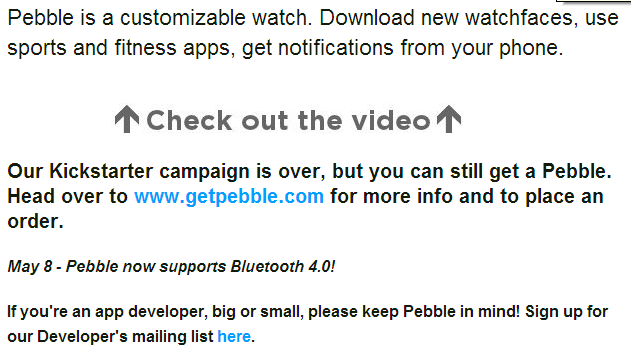 To begin with, they have a short description and then it directs you to watch their video. Their video is professional, personal, and ends with a call to action. It also offers a mailing list to keep backers up-to-date and in the loop. 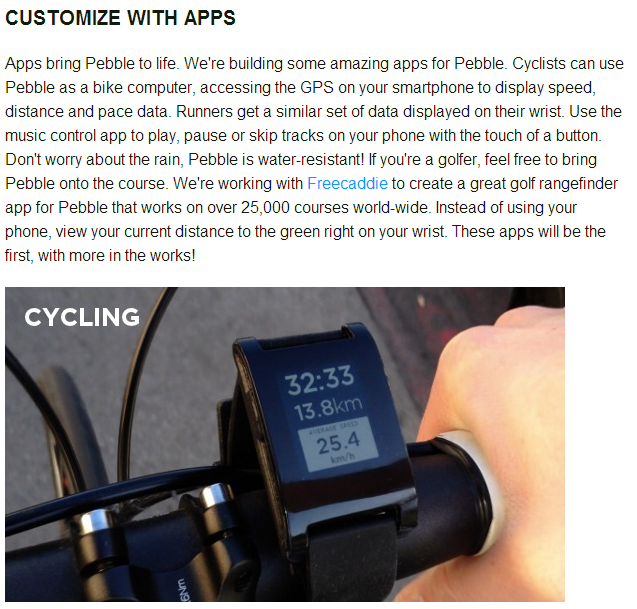 Next, it gets into the nitty gritty. It talks about what features the Pebble watch has, with eye-catching pictures.

They address common questions and concerns in their FAQs.

They explain how the product works in clear terms so anyone can understand.

Backers are told where the project is at and what the goal is, along with a call to action.

The awards are clearly set up, including a small one for only $1 pledges. The smaller pledge also builds a massive network for when the Pebble finally debuts by getting people to sign up for the newsletter. An early bird award is also included to spark interest and a boost in initial funding. All rewards include an estimated time of delivery, should the project succeed in funding. 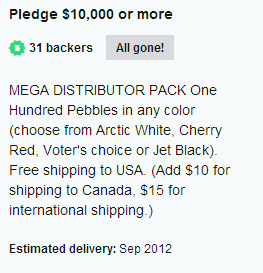 Backers are constantly updated with the Pebble’s progress and success.

Backers who pledge a certain amount get to vote on a fourth color. This involves backers in the creation and design of the product, making them feel like a part of the team and can really stir up some excitement.

Obviously, Migicovsky and his team made the perfect Kickstarter campaign.