Gaming World Records That Are Unbelievable 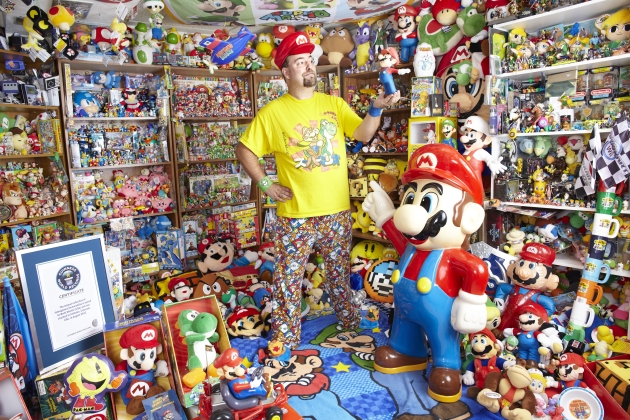 The soon to be released Guinness World Records – Gamer’s Edition has everyone talking about the most amazing video game feats that happened for 2013. Many top records were broken this year, but the book also includes trivia, facts, and other interesting notes about the gaming world (including board and non-video games). I have listed the gaming world records that I found to be the most fascinating. Look for more on January 10th, when the book hits store shelves.

Brett Martin, from Colorado, has collected game trinkets for twenty-four years. It began with a small Mario figurine when he was just eight years old, and really took off once he discovered the magic of eBay. He collects mostly Nintendo, but has a few others from big name game icons, such as Pac-Man or Mega Man. Martin only chooses the characters or games he really enjoys playing, and strays away from the more commercialized collectables (coughPokemoncough). He prides himself for buying only authentic items, and not falling for knock-offs. His collection, at print time, consists of 8,030 items filling an entire room of his house. He stated that his wife is “amazed.”

This is unbelievable to me, because it came as a surprise. The record is still held by Disney’s Tron: Legacy way back in 2010! I thought the movie was great, don’t get me wrong, but I just don’t remember it being that big of a hit among everyone else. The film received mixed reviews from critics, the negative ones focusing mainly on the poor acting and character development. As compared with the first film, this sequel had a touch of trying-too-hard. Disney earned a whopping $400,062,763 during Legacy’s theater run…I would bet largely due to the praise for its special effects.

At the time the book was being written (June of 2012), John Bates was 85 years old. You might think the Wisconsin native would hold the record for something tame, and older, such as Donkey Kong, or Super Mario World, but you would be wrong. Mr. Bates is very active in his old age and scored 14,000 perfect “300” games in Nintendo’s Wii Sports Bowling between April 2008 and June 2012.

This story is one of the more unbelievable because it shows how gaming is more than just for fun, and can actually lead you to a career. Jann Mardenborough, a nineteen year old British citizen, won the 2011 GT Academy. This program was created by PlayStation and Nissan, giving the best Gran Turismo players a chance to actually drive a professional racing car. Mardenborough was the youngest GT Academy winner, and impressed Nissan so much that they hired him! He now has his international racing license and has raced in the Blancpain Endurance Series as well as the recent Toyota Racing Series. This past year he raced in the FIA European Formula Three Championship and the British Formula Three Championship, placing 21st and 6th, respectively.

If any of you watch The Legend of Korra you will recognize Steve Blum’s voice. He played Amon, Korra’s nemesis from the first season. As of May 10, 2012, Blum’s deep vocal chords have been credited with 261 voice appearances in video games, as well as a few hundred cartoon credits (including the crazy yet lovable Stitch, from Lilo and Stitch).

Tool-Assisted Speedruns are put together by combining a variety of tools to provide enhancements (such as an emulator), that make reflexes almost unnecessary. The point of the speedrun is that a player knows the game so well they are able to get through it quickly with no errors, essentially a perfect game. This is extremely difficult, but using the natural glitches of the game, most notably the “Backwards Long Jump,” players have a much better chance. The most recent speedrun was recorded on March 31st of this year and was for a team (Snark, Kyman, and ToT) who completed the game, skipping any stars, in 5:01.25.

Largest Number of People Playing in the Same Board Game

At the annual Gen Con gaming convention in Indianapolis this year, the record was broken with the game Settlers of Catan. This game, which is multi-player, had to undergo a number of rule modifications to allow for the 922 players to all participate in the same game. There is currently a record for Chess, in which 1,200 people played the game simultaneously, but there is no winner. There are just 600 games going on at the same time. With the new record, all 922 people were players of the exact same game; they each had a role to play which would affect the other 921 players, and at the end of the game, only one person would be crowned victor.