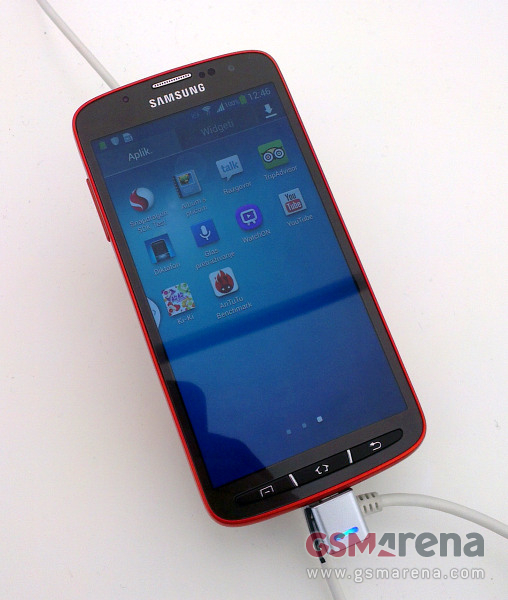 The Galaxy S4 Google Edition isn’t the only variant of the flagship device that’s got the crowd excited. Instead, there’s a completely new and rugged version of the Galaxy S4 in the works, that’s even more amazing than the Google Edition.

Remember when we reported about a rugged water-proof version of the Galaxy S4? Well, the rumors have just become more solid with new leaks, and it looks like Samsung is getting ready to launch the new rugged Galaxy S4 Active.

Previously, it was reported by WSJ that the new water and dustproof variant of the Galaxy S4 will be called the Galaxy S4 Active – that’s definitely a catchy name. Now, after numerous speculations and rumors, the alleged photos of the Galaxy S4 have been leaked and it looks kinda great.

The images have been leaked via GSM Arena. The new ruggedized version of the Galaxy S4 looks quite different from its “sophisticated” brother. As you can see in the image above, the Galaxy S4 sports a cool bright red look (Holy Flame Red Nintendo 3DS!) with black covering the front and a little bit on the back side. The Galaxy S4 Active looks more stylish than its not-so-ruggedized counterpart.

The Galaxy S4 Active will come with an 8 megapixel rear shooter instead of the 13 megapixel, as reported by GSM Arena. It will also pack a Quad-Core ARMv7 processor under the hood with Adreno 320 GPU, as mentioned in the AnTuTu benchmark screen. 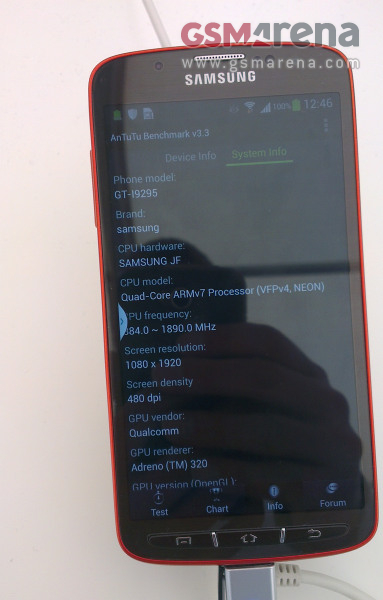 There are still no solid words on the specs of the Galalxy S4 Active yet, normally Samsung makes two different variants of their devices, one for the U.S. market while other is aimed at International markets. The U.S. variant of the Galaxy S4 Active might come with a Qualcomm Snapdragon 600 chip, although it hasn’t been confirmed yet. We’re not sure if the ruggedized version of the Galaxy S4 will sport the same specs as the regular version like Android 4.2, 2,600mAh battery or even the 2GB of RAM.

The Galaxy S4 doesn’t have a specific launch date yet, but according to the previous rumors the announcement may not be far ahead. We’ll be bringing you all the latest news about the device as it develops.

Do you think a waterproof and dustproof version of the Galaxy S4 was necessary? Let us know.