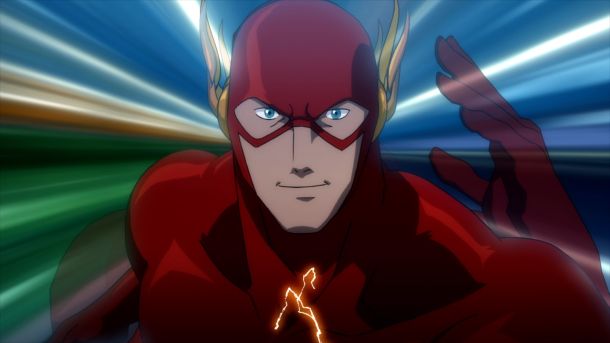 As you may have guessed from title,  Flash Point Paradox centers around The Flash, who manages to also vibrate through time and create a paradox. All number of hilarious things are said and done! Right? Because it’s a cartoon and cartoons are always funny. Right?

No. You are wrong.

This movie is dark. Lights out, blacked out windows, lock yourself in the Panic Room and don’t make a sound, dark.

Quite often in a review, spoilers or hints are peppered through it. YOU GET NO PEPPER! This is something you need to experience and I don’t want to take away any of the spice of the film for you.

It’s a normal day for the Justice League, they’re derping around, ruining everyone’s fun. The Flash is having a sad because he wasn’t “fast enough” once and he thinks that caused the death of his mother. Then, the paradox happens and all hell has already broken loose. (I mean that quite literally, the transition from ‘normal’ world to ‘paradox’ is poorly executed. But given that we know the name of the movie…. It’s not that big of a shock when suddenly the world is different).

Realistically, these kinds of plots are stupid. Not because time travel would be impossible, because SPLUH! obviously it will be possible, or else how did they make Back To The Future? It’s unrealistic because The Flash, like most Superheroes, has a basic grasp of science and should know better than to play around in the past. Everyone knows that creates a paradox, or a black hole, or is the kind of thing that gets Buffy killed and turns Willow into another shade of awesome.

Still, for a story line that has been done to death by almost everyone, this is one is surprisingly well executed.

As I’ve said, the world is dark. But this is different from your standard“Oh look, the Joker is a good guy and there’s an Owl Man and he is the bad guy” paradox. This world was created from a broken time line and so it’s a broken world. A broken, twisted, jabby world.

I was not a fan of the art in this. The eyes were too squinty. I also hated the depiction of Aqua Man. Dude is meant to live in the water and be swimming all the time, his body should not resemble a chicken nugget on steroids. Despite the fact I didn’t find it aesthetically pleasing, the art does serve a greater purpose. They don’t all look the way I think they should, but they look like what they’re meant to embody. The re-imagining of Superman was superb and frightful. Which is what made it superb.

There was also a vast array of characters. I’m not sure which Earth this is meant to be set in, but it looked a bit like Earth 16 (Young Justice universe) as it had Aqua Lad and his underwater pals in there. It also included some great cameos that I won’t mention because spoilers are horrible. Sufficed to say though, their appearances alone are worth looking out for the Trade Paperback of this movie which is already out. Just to scour through the pages and find the gooey goodness of an obscure reference to a superhero you forgot existed until now.

The Script and the Voices:

I think you’ll have a lot of fun trying to guess at some of the voice actors in this, so I don’t want to ruin that game. Rest assured, there are some big names and wonderful executions of lines.

Scripts for this sort of thing can sometimes become hokey or melodramatic. This one is not. In some parts, it’s actually incredibly clever. My tip is to listen to what Superman has to say before things get all paradoxy. It’s only a few small lines, but the words and the way the voice actor says them is priceless. It really set the scene for something twisted.

Worth seeing. Do not let your kids see this.

They might rate this PG, but there’s some incredibly brutal scenes made only more shocking by characters that carry them out. If you’ve always been a little skeptical as to whether heroes are made good, or are just instinctively good, this is definitely a movie you want to see.

4 and a half alternative futures, out of 5.