When you think “movie tie-in toy,” many things come to mind: action figures, light sabers, wands, swords, stuffed rabbits with pointy teeth. All these things make sense and can be used to reenact favorite scenes from the movies. But what happens when a product, while representative of a character or key element, is just completely ridiculous? How do manufacturers not anticipate the repercussions, some of which require them to recall their products immediately due to inappropriate results? What were the creators thinking when they came up with some of these pieces of paraphernalia?! 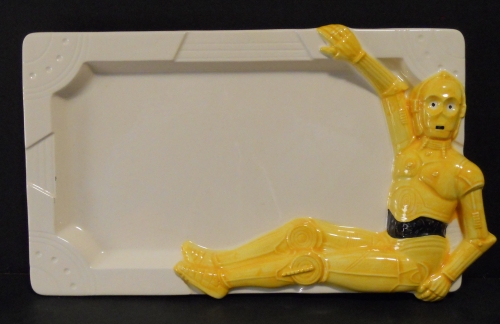 This mask is similar to Sloth, but way more grotesque and scary. So much so, that the creators are advertising that when you wear this mask you will “transform into the wackiest monster of the 80s.” Clearly, the creators have not actually seen The Goonies or they would know that Sloth wasn’t much of a monster, nor was he “wacky.” There is also only one eye hole, which makes the mask almost dangerous for extended or active wear. I don’t know anyone who wanted to be Sloth when we would reenact our favorite scenes, let alone dress up as him for kicks. He was a cool character, saving the day in the end and all, but with so many other choices, he’s pretty close to the bottom of the list.

I, personally, like the witty, golden robot better than R2-D2. I do not, however, like him enough to reach into his crotch every time I need a piece of tape! Sigma, a ceramic company who makes many other Star Wars pieces, including picture frames, mugs, and figurines, created this piece around 1980. Most of their other Star Wars pieces, as well as their Muppets collection, are all pretty PG. Unless this was created as a bit of a laugh on purpose, I can see no logical reason for the design and position of the roll of tape. To accompany this suggestive dispenser, Sigma also created a picture frame in which C-3PO is posing in what can only be described as a lady-like position. The picture frame is available on eBay, while the tape dispenser is out of stock everywhere and considered a very rare antique. 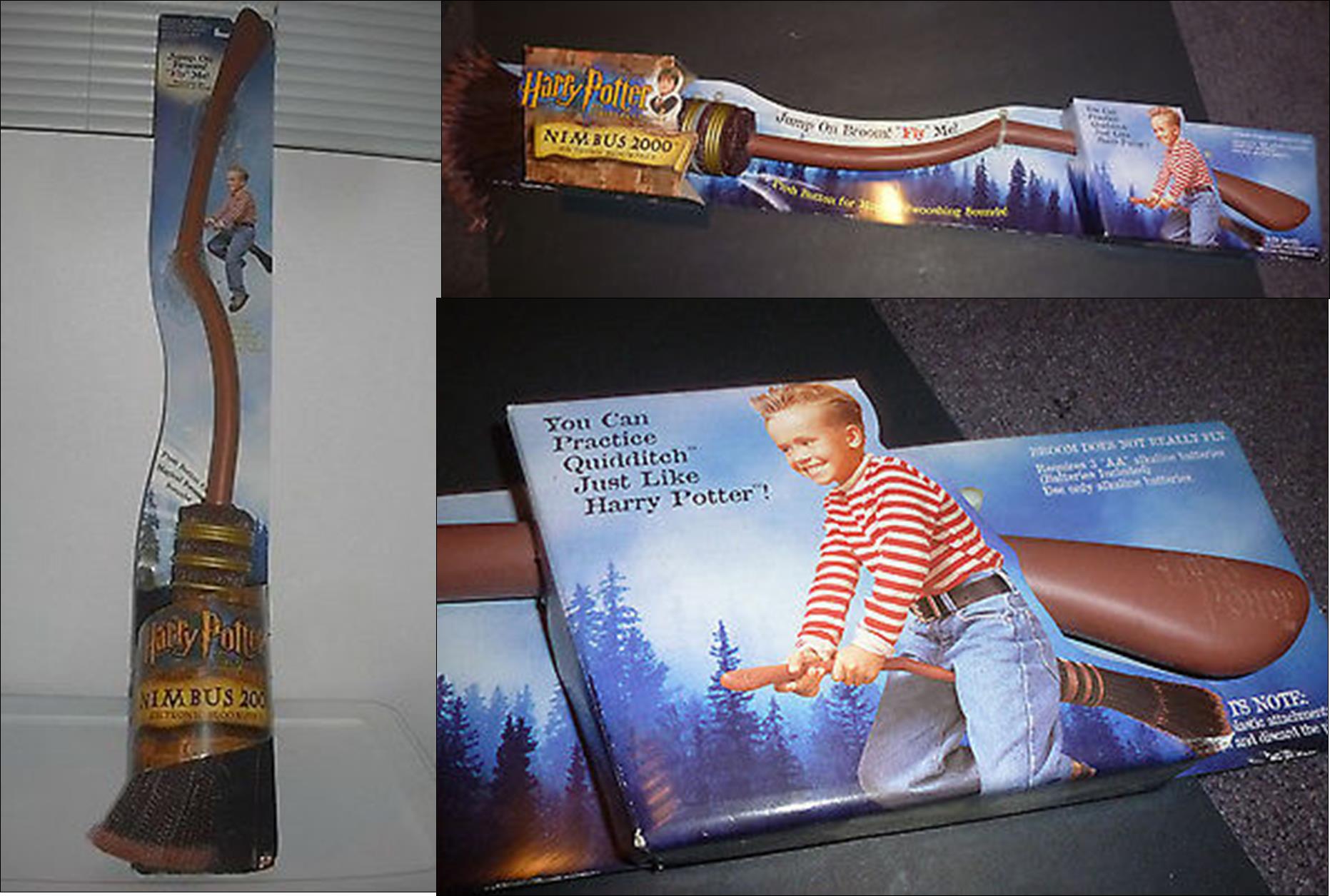 This broom was produced by Mattel shortly after the release of the first of the Harry Potter films. All fans know how crucial his broom is for Harry, and how much fun it would be to have one of their own. The Nimbus 2000 encourages children to hop on and fly around their house; the grooved stick and handle provide easy riding. It also “simulates the sensations of flying” through sound and a vibrating handle. The “sensations of flying.” A vibrating handle. I’m pretty sure you can all see where this is going and why Mattel almost immediately discontinued the product. Parents complained that their children (especially their daughters) played with the toy much. One parent claimed her daughter and her daughter’s friends would spend hours in their room with the door shut and ride the broom. Even the woman’s 17-year old daughter “enjoyed playing with it frequently.” DOH! 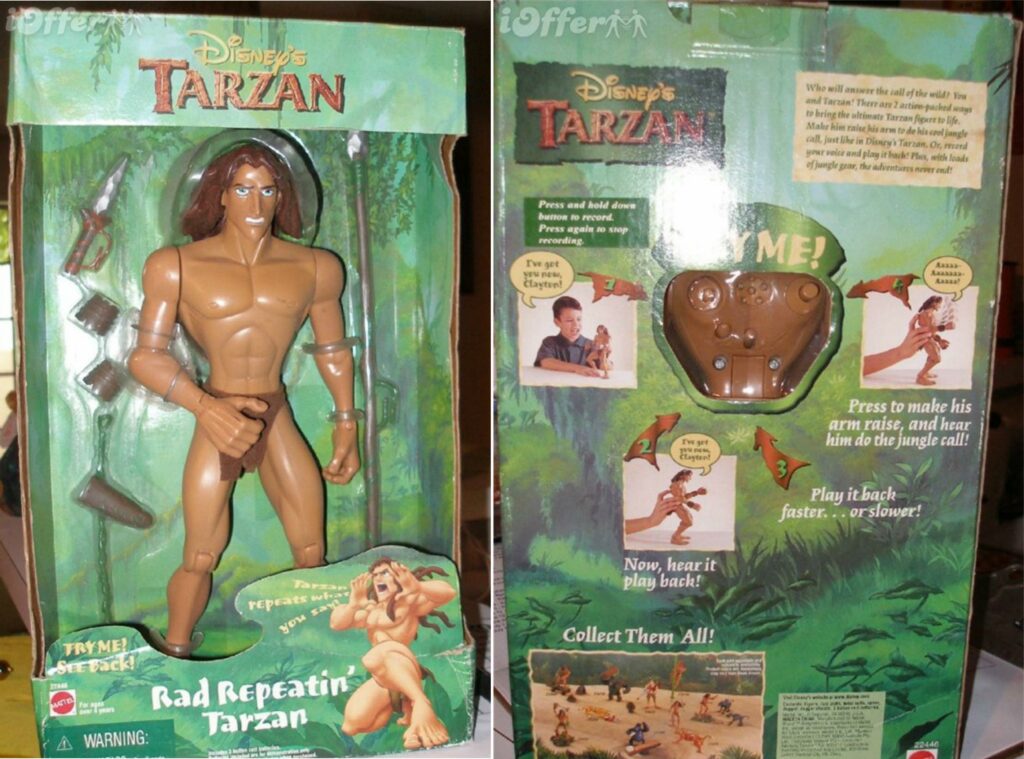 The point of this toy was for Tarzan to beat on his chest and make a gorilla-call type of sound, as he does in the family friendly Disney cartoon. Mistakenly, the toy makers had the starting position of his hand (cupped to grab onto a vine…or any other cylindrical objects…) significantly lower than is necessary to reach his chest. Tarzan is definitely beating, but unfortunately for Mattel, it does not appear to be his chest. The tiny speaker inside his plastic body also garbles his gorilla-call, making him grunt instead. So, we have Tarzan, dressed only in a (removable!) loin cloth, pumping his cupped hand up and down at crotch level while grunting. How did this make it past the testing phase of toy production?! Needless to say, Mattel also recalled this toy and now it is available as a highly priced collector’s item.

Star Wars clearly inspired all sorts of ridiculous toys and merchandise, but this gimmick is by far the most outrageous! This “toy” was created in a hurry to put something on the shelves during the Christmas season of 1977. There was no way action figures could be manufactured in time for the holiday shopping rush, so Kenner (the big toy maker back in the day) put out an “IOU.” Basically, you bought an empty box with pictures of all the action figures that Kenner planned on making in the upcoming months. While unwrapping a toy-free box would be a disappointment to any child on Christmas morning, it has become a coveted collector’s item since it was only available for one year, and most children destroyed it searching for figures inside. This product goes for over $200 on eBay!