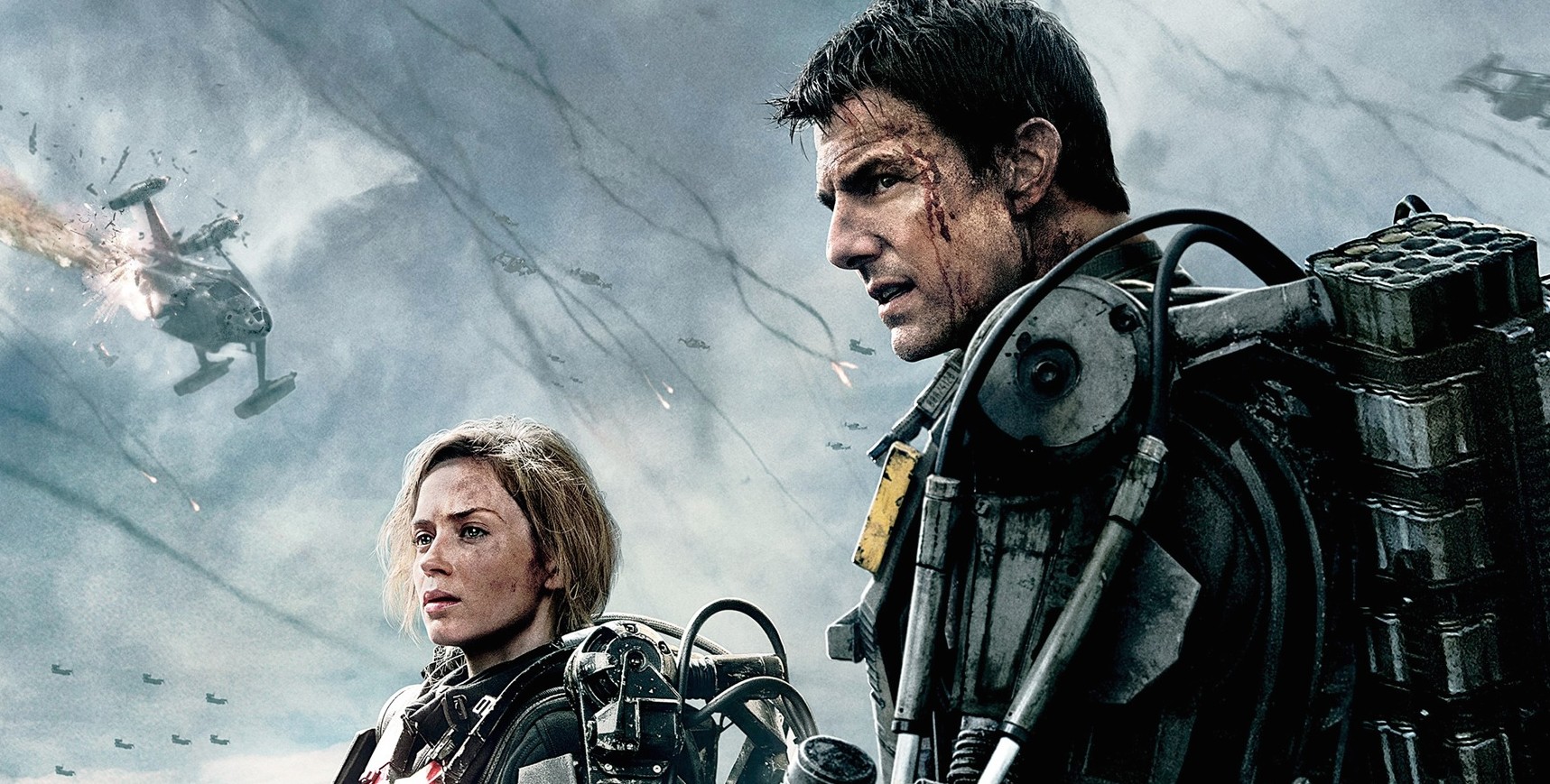 Dark Souls is a series of games where the player assumes the role of an undead warrior, endeavored to fight countless waves of similarly undead soldiers and monsters in the same arrangement over and over until the end of time, or at least the completion of the game.  There is death in the game and the player will die continuously, however they will be reborn again and again to fight the same enemies they previously killed no matter how many times they try.  This same governing philosophy is what also becomes of the film Edge of Tomorrow.

Based off of the novel, All You Need is Kill, which was later adapted into a manga of the same name, Edge of Tomorrow finds Major William Cage (Tom Cruise), the United Defense Force’s Spokesman, trying to sell the public on the military’s next big engagement to the public against an alien invasion force called mimics. As a twist in fate, he is abruptly arrested, demoted, and sent to the front lines for the assault he tried so hard to sell.  More bureaucrat than soldier, he dies quickly in battle, immolated in the blood of an Alpha mimic.  Instead of acquiescing into the sweet serenity of death, Cage awakens back again at the UDF base camp, a day before the assault.  Disoriented and confused, his day plays out much the same, the assault occurs, he dies, he awakens again.

Cage quickly learns that his time continues to repeat over and over again, with his skills improving and his questions mounting, but to no avail until he realizes that the UDF’s star soldier, Rita Vrataski (Emily Blunt) was actually in the same shoes at some point.  Joining forces, they must find the Omega Mimic to possibly bring an end to his eternal groundhog day and finally turn the tide in a losing war. 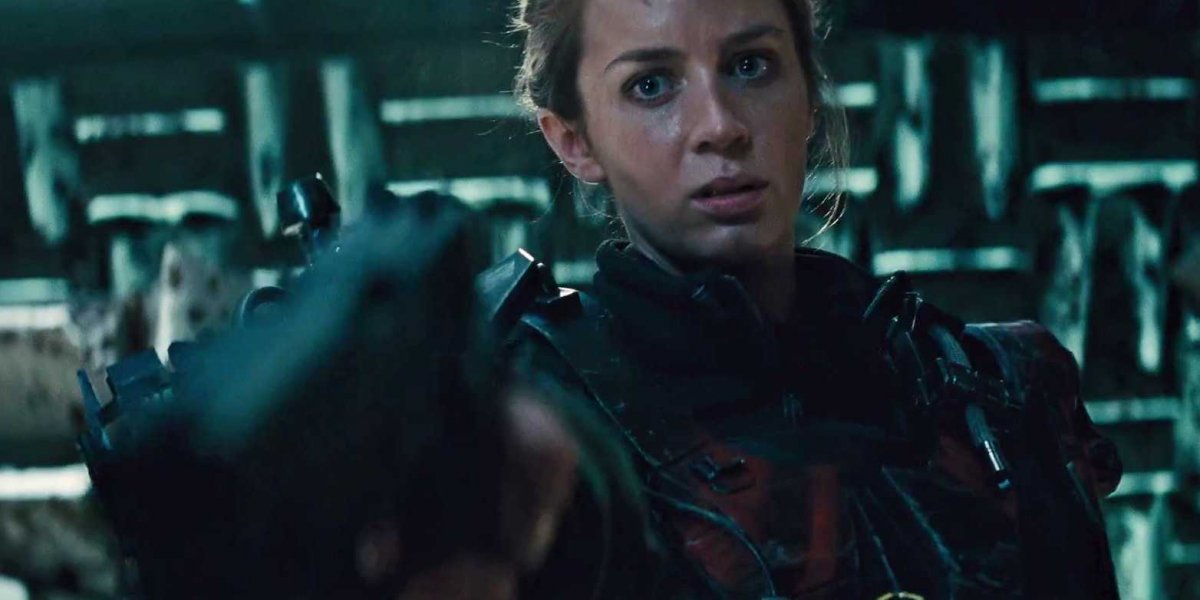 Cruise is serviceable enough as the adaptable Cage, balancing the time weary attitude of the character along with the weight of his responsibility.  At times Cruise’s natural charm goes a long way to humanize the reformed soldier, uplifting certain areas.  Other times, he overplays the gravity of the situation he’s in and it comes off more sullen than need be.  Blunt, on the other hand, is a revelation once she’s onscreen, at once a hardened warrior, some of her peers even referring to her as “The Full Metal Bitch;” she also brings balance and background to the movie, leaving the audience wanting more.

Similarly, the supporting cast pulls their weight being unobtrusive and preventing themselves from being annoying.  For being a movie that plays out several of the same scenes over and over again, there is enough variety amongst the well-defined characters that each doesn’t over stay their welcome.  This is especially true for Bill Paxton, here playing the hard Master Sergeant Farrell, gleefully charging into the archetypical military taskmaster role with all charisma built up over his career.

It Shouldn’t Work, But…

The movie is well paced and fun rollick for the most part.  Though the subject may engender a morose feeling, the direction, here by Doug Liman, meditates with glee on the trial and error process Cage and Rita take to overcome their alien tormentors.  The humor focusing on such macabre situations is really thing to behold and what really injects life into this movie so centered on death.

Further, this is about the only movie where an exposition dump could ever be viable for.  Indeed, in the case of one who has to repeat the same couple of days’ time and time again, it makes sense to have the characters result in simply telling each other their stories rather than showing their companions and by extension the audience.  Despite this, there might have been more room to flesh out Rita’s character more than just through dialogue.

A romance, unfortunately, gets tacked on between these two characters towards the conclusion of the movie.  At first a believable unrequited affection on the part of Cage is played well to show the creepiness of his infatuation.  Understandably, Cage can remember the multiple experiences he’s had with Rita and his actions tend to venture more towards the obsessive side.  When the infatuation is finally mutual, however, it plays out rather generic and at a crucial point in the story where it feels beyond superfluous.  It does a disservice to Rita’s character in that moment, pushing the tough character into this hyper feminized role all of a sudden.  Sharing feelings for one another is one thing, going the extra steps with it here just leaves a sour note.

Additionally, though many questions are easily explained away through exposition, some viewers may have a hard time following the logic behind some key decisions throughout the film.

Sadly, the ending almost makes the experience complete and if not for the last 7 to 10 minutes the movie had been a triumph in the endeavor.  Unfortunately, the ending betrays all of the built up tension happening prior to that point.

An Adaptation that Works

But despite its shortcomings the movie overall is an enjoyable ride, with plenty of action set pieces spaced evenly throughout the film.  Though the designs for the mech suits and aliens fall short of their manga counterparts, they’re substantially grounded enough to feel highly detailed and realistic.  Furthermore, some of the best action scenes, including the first big battle, play well in 3-D, though for most consumers the regular showing should be sufficient enough.  Cruise and Blunt are a sterling pair of leads here that are easy to root for.

Edge of Tomorrow blends the dread and hopelessness of an endless loop with the fun experimentation of Dark Souls all into an epic, yet self-contained narrative that will thrill audiences ready for summer action.

Amazon and Hachette Battle for the Book Industry