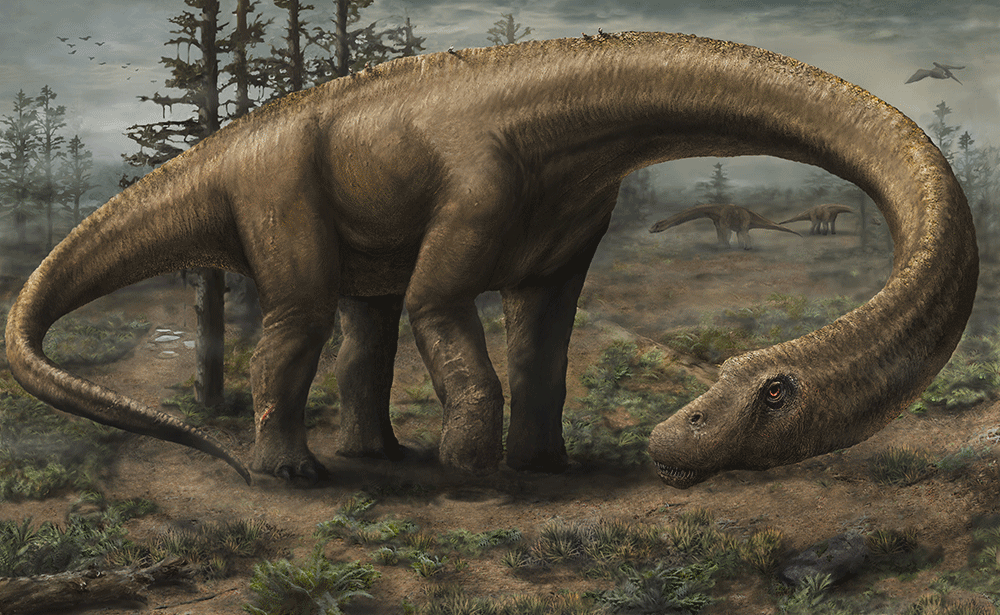 Let’s admit it: we all had a collection of plastic toy dinosaurs when we were kids, and our favorites were always the largest and most fearsome. Well, the newly discovered Dreadnaughtus schrani puts all of our toy collections to shame, because this thing is huge – and when I say huge, I mean ginormous.

Scientists unearthed the skeleton of the Dreadnoughtus schrani specimen in southern Patagonia, Argentina, where researchers have been working on excavating the fossil over the course of four digs between 2005 and 2009. The study was headed by Dr. Kenneth Lacovara, an associate professor at Drexel University, who discovered the fossil skeleton and led the excavation. This new genus and species of dinosaur would have lived 77 million years ago. According to Lacovara, “Dreadnoughtus schrani was astoundingly huge. It weighed as much as a dozen African elephants or more than seven T. rex.” Even more astounding, skeletal evidence revealed that this specimen was not yet full grown when it died.

The study claims that the Dreadnoughtus specimen would have measured 85 feet long and weighed about 65 tons in life, so it’s hard to imagine the ultimate size that this dinosaur might have reached. The specimen already stands apart as the largest land animal for which a body mass can be accurately calculated, and it is certainly the biggest of the titanosaurs, the group of large plant eaters to which the Dreadnoughtus species belongs. “It is by far the best example we have of any of the most giant creatures to ever walk the planet,” says Lacovara.

Another aspect of this discovery that makes the Dreadnoughtus so exceptional is the fact that the fossil is nearly complete, with about 70 percent of its bones recovered. When supermassive dinosaurs have been discovered in the past, they have needed to be pieced together from fragmented fossils, so the Dreadnoughtus signifies an extremely exciting discovery for paleontologists. Not only is it one of the largest animals to have walked the Earth, it is also a fantastic opportunity to study the anatomy of these gigantic sauropod dinosaurs and will allow scientists to learn more about their evolution and existence than ever before.

I think we can all agree that the Dreadnoughtus schrani is the king of all dinosaurs. And let’s not forget how awesome its name is. Lacavara chose the name “Dreadnoughtus” because it means “fears nothing,” and I think it’s safe to say that the name applies; when you weigh the equivalent of a dozen African elephants, you don’t have to worry about predators. The name was inspired by a class of turn-of-the-last century battleships called the dreadnoughts, “which were huge, thickly clad and virtually impervious.” It’s nice to see a plant-eating dinosaur finally getting its due as the most epic and hardy of the bunch.

Lacovara’s team has digitally scanned the bones from the dinosaur specimen, and they have made a “virtual mount” of the skeleton that is publicly available for download as a 3D model. This digital reconstruction is a practical method of transporting such a massive specimen, and Lacovara believes that digital modeling is “only going to become more common in paleontology, especially for studies of giant dinosaurs such as Dreadnoughtus, where a single bone can weigh hundreds of pounds.” The detailed description and analysis of the Dreadnoughtus schrani, authored by Lacovara and his colleagues, can be viewed in the journal of Scientific Reports on nature.com.