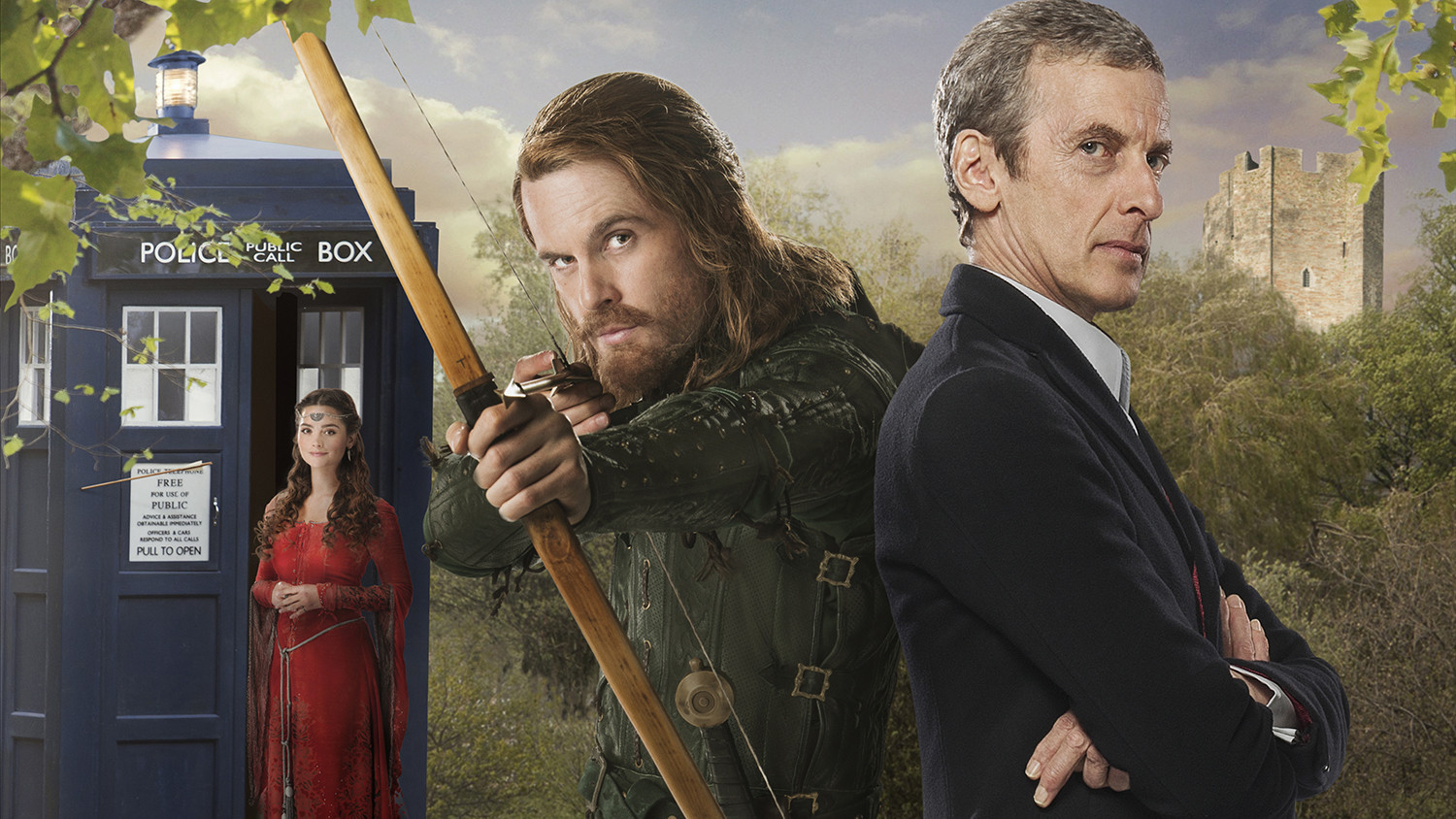 Doctor Who has a long tradition of realizing fictional stories through science fiction whether it be ghosts in Charles Dickens’ time or evil witches casting spells in the time of Shakespeare. This story is different as it depicts the events of the Robin Hood story as historically accurate. Suspending our collective disbelief for a moment, let’s see if historical anachronism is the only flaw in this episode.

The story begins by giving Clara free reign of their next destination. She chooses to see Robin Hood, which the Doctor rightfully laughs off as a work of fiction. We’re meant to see the Doctor’s lack of faith as cynical, but asking to meet Robin Hood is like asking to meet Harry Potter. It’s not a mystery whether he truly existed. We know he’s a story and the Doctor certainly would having been all over the country in that time period.

Either way they land and immediately run into Robin Hood. He attempts to steal the Tardis so the Doctor sword fights him with a spoon. This funny scene seems to paint Capaldi’s Doctor as being an elderly scrapper, much like Jon Pertwee. The Doctor still distrusts Robin Hood’s existence when he introduces his merry men. The Doctor analyses DNA samples and proposes theories while Clara goes over Robin’s back-story with him. We apparently landed in the story just before the famous archery competition.

Robin Hood reenacts the famous arrow splitting scene. Just as he’s about to claim a golden arrow as the prize, the Doctor bursts in and splits Robin Hood’s arrow down the middle as well. The two have a bit of a pissing contest, splitting each other’s arrows repeatedly, until the Doctor blows up the target and causes the guards to capture all three of them. The guards are revealed to be robots in disguise, thus confirming the Doctor’s suspicions that this is some sort of hoax.

Robin Hood, the Doctor, and Clara are all in a dungeon with the former two bickering constantly. The grumpy Doctor hates Robin’s constant merry laughter and Robin hates the Doctor’s lack of belief in him, leading the two to compete for authority. Clara tells the two to shut up and the guard assumes she must be the leader. She is taken to the corrupt sheriff for questioning. She tricks the sheriff into revealing how the robot’s ship crash-landed and needed gold to refuel. This explains the heavy taxation but only taking gold and slaves for labor. One might question why robots would even need flimsy human laborers but that’s not mentioned. Apparently the Sheriff is helping the robots so he can take over the world with their ship.

The Doctor and Robin Hood escape and find the crashed spaceship. The ship has records of all the legends of the past including the story of Robin Hood. The Doctor concludes that the robots must have made a Robin Hood robot to create false hope in the peasants as well as a fake sheriff so they could claim their gold. He looks at the destination for the ship and sees it is headed for “the Promised Land,” just like the cyborg ship from the premiere.

The Sheriff and his robots break in and capture the Doctor. Robin Hood and Clara escape and round up the merry men for a rescue, but not before Hood demands the Doctor’s full story from Clara. The Doctor frees the slaves and they use golden plates to reflect the robot’s lasers. Robin Hood and the Sheriff burst in and the Doctor warns that not only is the ship so damaged it will explode, but there isn’t enough gold to leave the atmosphere. You’d think robots would be able to calculate that but that’s not mentioned.

The Sheriff begins fighting Robin Hood, and the Doctor is confused, saying Robin is just one of the robots. The Sheriff says building an enemy to engender false hope is a dumb idea, and the Doctor agrees. I think that idea makes total sense and would create themes of what truly makes a hero and whether robots have will, but that’s not mentioned. Robin and the Sheriff sword fight on a wooden beam over a vat of molten gold, and Robin uses the Doctor’s move to knock the Sheriff in.

They all escape without stopping the ship for some reason, so it launches anyway. The Doctor says just a bit more gold could help the ship leave orbit before it explodes.  The golden arrow could work so they just need to shoot it into the ship’s hull. Robin’s arm is injured so he can’t do it. The Doctor reveals he cheated in the archery competition with homing arrows. So the three of them work together to fire the arrow. It hits and the ship can finally leave the atmosphere and explode.

The Doctor finally admits that fictional heroes can exist because he is one himself. He leaves Robin Hood with the knowledge that his story would become a legend, but it would not be known as history. He also leaves Maid Marian with him and everyone lives happily ever after.

While it certainly was interesting to twist the story of Robin Hood into one not about rich and poor but aliens who needed gold to pilot their ship, the execution is sloppy. There are so many plot-holes and the characters act completely irrationally. While it makes sense for Clara to ask to see Robin Hood’s time, she’s a schoolteacher who would know that Robin Hood was just a story. The Doctor’s skepticism of the supernatural, which is normally seen as an asset is now being punished because Robin Hood turns out to be real, defying all logic. The episode only barely hints at the overarching season story, but nothing new is revealed. “Robot of Sherwood” (which should really be called Robots of Sherwood since there’s no one robot that is more important) is nothing but pointless filler, and poorly written filler at that.