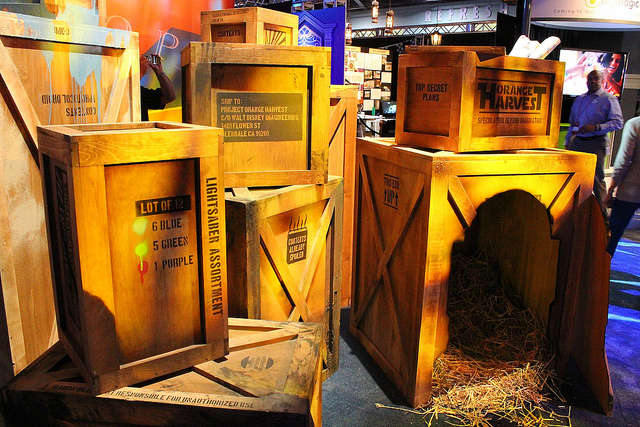 Anyone paying attention in the Disney realm knew this was coming eventually. In fact, Disney has been teasing insiders since 2013’s D23 expo, where a whole bunch of crates “mysteriously appeared” from somewhere incredibly far away. The crates, all marked “Project Orange Harvest” were not-so-subtly Star Wars themed—indicators ranged from a roll of blueprints for a Jedi scooter sticking out of one crate, to a life-sized R2-D2 shaped hole in the side of another.

What Goes Around Comes Around

Since last year’s expo, details have slowly trickled out from various imagineers and other higher-ups at Disney. Bob Iger, Disney CEO, announced a “significant” increase in the Star Wars presence at the Disney parks. Iger referenced both California’s Disneyland as well as Florida’s Walt Disney World, but brought up the fact that Star Wars has also done well at international Disney parks (France and Japan) as well. According to Iger, the plans are well underway to overlay Tommorowland in California with Star Wars-themed décor, as well as replacing a chunk of Disney World’s Hollywood Studios with what will essentially become “Star Wars Land”.

This new land would fill in the space that stretches between the 50s Primetime Café and the current Star Tours—which will mean replacing the Indiana Jones Stunt Spectacular and American Idol attractions as well as a small restaurant and the soundstage that used to house Drew Carrey’s Sounds attraction. All this is supposed to be well underway before next year’s film release of Star Wars VII in December.

Florida’s Hollywood Studios has been hosting the summer “Star Wars Weekends” for years now—the first festival was held in 1997, then on and off again until 2003 when it became an annual event. Many guests had issues with how pervasive Star Wars weekends had become, as SWW eventually took over the entirety of Hollywood Studios with face characters that ranged from unexpected to downright scary for the younger visitors. However, now that Disney owns Lucasfilms, perhaps the more permanent fixtures within the parks will cause less confusion and unwanted surprise. If fan speculation is correct, the expansion plans may include a cantina complete with themed treats such as Bantha milk and Rancor snacks (both were hinted at on crates at D23 last year).

And Everything Old is New Again. But Also Old. And Needs Replacing.

In California, the facelift to Tommorowland is met with much less resistance. Visitors have bemoaned the sad state of the park for years now, and it seemed at as time wore on “Tommorow” became a less and less appropriate name for this section of the park. The Peoplemover ride was shut down, and Captain EO came back from the 1980s. Finally, however, there are talks of taking EO out and replacing him with a brand NEW Star Wars 3D film, as well as updating the Star Tours attraction to include scenes from the newest film. There are also rumors of replacing the Peoplemover with those Jedi scooters teased on the blueprints.

Disney has had massive success with both the Star Tours attraction as well as themed gift shops where guests can stock up on everything from casual Star Wars t-shirts to costume robes and their own custom Lightstaber. Merchandising is so popular during Star Wars Weekends that Hollywood Studios constructs an enormous tented structure behind Rock N’ Rollercoaster (clear across the park from Star Tours, mind you) filled with collectibles, toys, and fashion as well as character meet and greets and autograph opportunities. “Darth’s Mall”, as it’s called, isn’t even the only place to buy Star Wars swag—in addition to the store connected to Star Tours, SWW takes over two additional shops during the events, and foot traffic almost never slows down in any of them.

No matter what Disney decides to do with their Lucasfilm properties, it’s clear that we only really want one thing: More Star Wars, please!