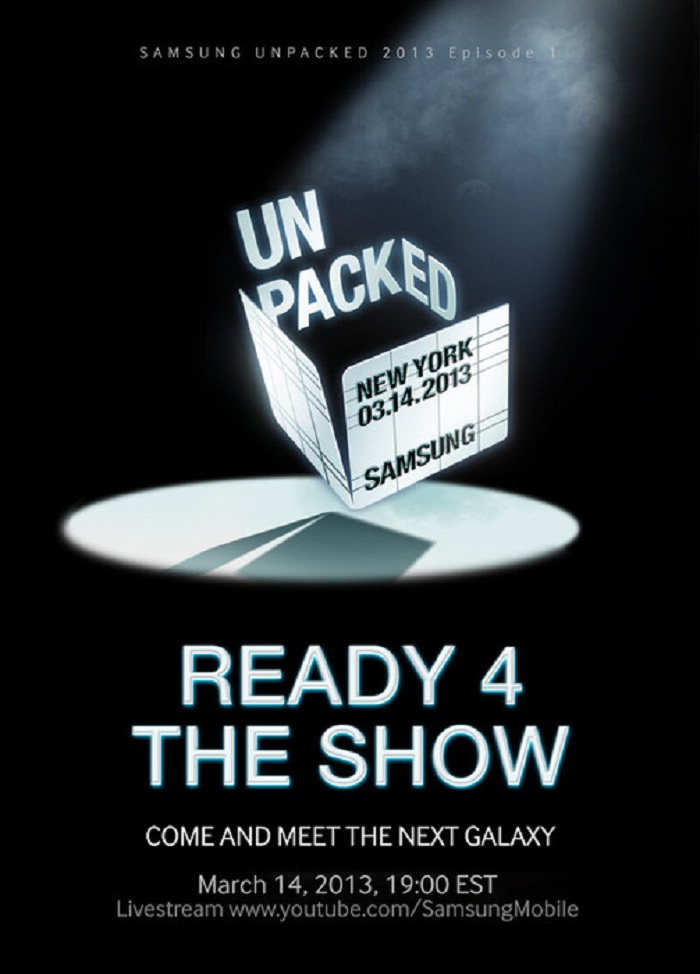 That’s right! The moment we’ve all been waiting for. Samsung has decided to forgo the opportunity to unveil it’s new flagship phone in Barcelona and has decided to launch the Galaxy S4 at a special event in NYC on the 14th of March.

Saying it, without saying it

Media outlets like CNET are reportedly receiving invitations just like the one pictured above. While it doesn’t come right out and say it, we take all the suggestive phrases like “Ready 4 the show” and “Come and Meet the Next Galaxy” to mean that this is indeed the long-awaited launch of the next-gen Samsung Galaxy.

This will be the first time Samsung has held a launch in the U.S. in three years. Initially, the Samsung Galaxy S was launched at the U.S. mobile trade show, CTIA. Since then, Samsung has chosen to launch subsequent phones internationally, first in Spain in 2011 and then in London in 2012.

Of course this leaves the rumor mills with less fodder. Now they will only be able to speculate about the appearance and specs of the next-gen Galaxy, and of course, speculate they will. The specs and features that critics have been putting on the top of their speculative lists are as follows:

It will be interesting to see if any of these speculations are accurate as many have assumed that the processor would be the Exynos 5 Octa and that the display would feature Super AMOLED Full HD. Only time will tell!