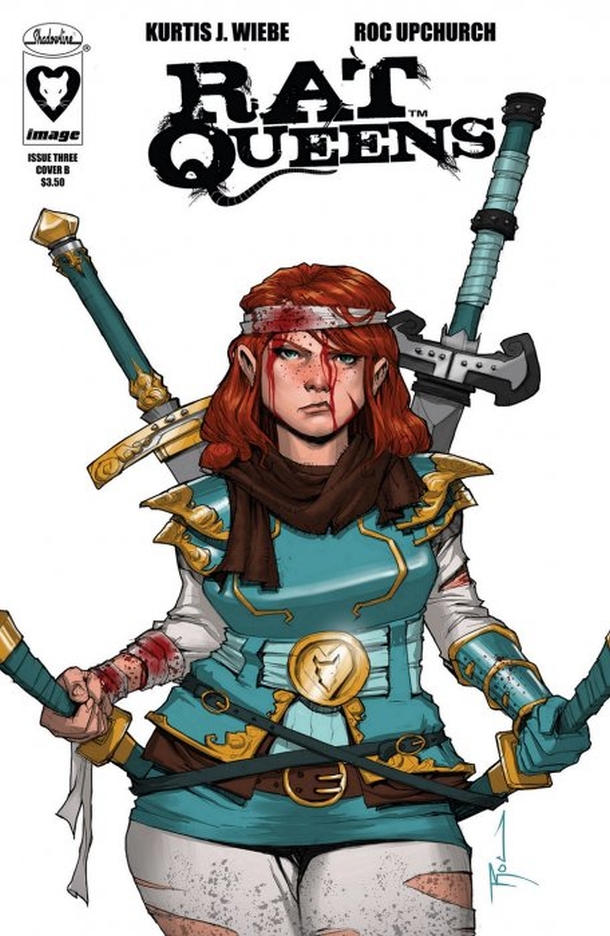 The third issue of The Rat Queens is here and the journey has taken a detour. But not a detour that leads to Death Valley. If you had your heart set on seeing more bruises and gouging? You’re about to get a broken heart. You won’t be the only one.

I wanted more blood. It’s really the fault of Wiebe and Upchurch (the two genius-heads that make the Rat Queens my happy place every month). They started this. You can’t seriously expect to deliver guts, gore and blood in the first two issues, then give a girl a soppy episode. Barely anything broke through the skin in this third issue.

Well, very few physical things were broken in the third issue. Emotionally? It was a bloodbath.

So far we’ve been fed little tidbits about The Rat Queens and their lives before we met them. In this month’s issue, they shoved a sandwich of back story in our mouths and ordered us to chew.

From missing beards to one hell of a tasteful kissing scene that could only be rivaled by that time Kate Kane proposed to her girlfriend. The Rat Queen’s issue 3 has it all. So whether you’re just picking up the third issue or you finished it and you realized you’ll need to read it again, chew slowly. There’s a lot of information and more importantly, a lot of life, in those pages.
It wasn’t a good change to have a break from all the bloodshed because I like how these guys do bloodshed. They do it so well that I was looking forward to some carnage and when it didn’t happen, I had a sad. However, where most stories have dips and peaks, this was less of a ‘dip’ as it was the characters experiencing the eye of the storm that is heading their way.

Yeah, there was disappointment when by the third page someone wasn’t having their innards spilled everywhere and hardly anyone was drunk. But the bright, but slightly dark, side of these sorts of issues where there’s more heart than fists is what it does to the fight scenes. Next month, I predict the ladies will be throwing punches and swinging swords once more. When that happens, those fights scenes will be all the more palpable and nerve wracking when they happen.

Because now we’re actually going to care about The Rat Queens. They have given them context now. The Rat Queens are no longer just kickass one dimensional characters, they’re kickass one dimensional characters that have actual problems and challenges. They’re people who are sacrificing one thing, to have another, the way actual people do. Their story may be set in fantasy, but they’re living anything but a fantasy.

So now people care about them and we all know what happens when you really care about a character in a story….. (Thanks a LOT George R.R Martin!)

This will not be one of my all time favorite issues of The Rat Queens (I think they could have fit in some blood splatter), but this one was necessary to make future issues even better. There’s already a connection to these girls, and through this third issue, they’ve made the connection stronger.