Comic Review: Ghosted #5. Have They Gone Too Far? 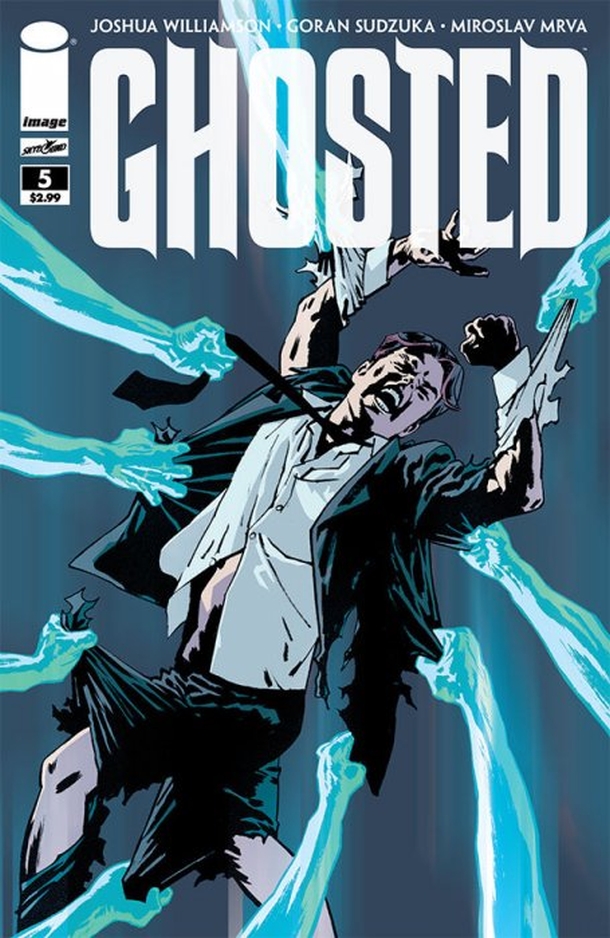 So far, every issue of Ghosted has put dynamite in the minds of those who read it. Then, just when you expect the fuse to go out, the dynamite goes out and it blows your mind. But has this issue just overshot the mark? Have they ‘jumped the shark?’ And other things that rhyme with ‘ark’ and mean that this issue just doesn’t live up to the hype of the others? Oh, look, here’s a review that might tell you whether they have or not.

It was kind of like reading the comic book version of this.

That’s right. The entire issue is a journey that ends with your proverbial face bitten off and your trust in the written word shattered. Which is fricken awesome! But let’s break it down like DJ Lance from Yo Gabba Gabba. Except with less beatboxing because I’m not very good at that.

Apt! It was completely apt!

I’ve made no secret of not being a massive fan of Goran Sudzuka’s work on this series. I mean completely no offense to him, but it’s just not my cup of tea, coffee or any other assorted beverage. But throughout the series, the artwork has not only grown on me, it’s shown itself to be perfect for the story that’s being told.

Issue 5 was no exception. Except, that it was exceptional.

Sudzuka’s artwork in Ghosted strikes me as conventional. The style reminds me of the old Dick Tracy comic strips. It’s that kind of style that, I think, can drain the life out of a story faster than a knife through the throat.

But not Sudzuka’s work. I mean, there are plenty of knives near throats in the Ghosted series, but not in the proverbial sense. He manages to take a fairly high level action story and amp it up another notch. Without giving anything away, I’ll just recommend that you take special note of the eyes. It’s perfect.

Of course, his work wouldn’t look half as good as it does without the colorist. Miroslav Mrva quite literally gives the injection of color that is needed in the story. It’s done so well that you could overlook most of the coloring, but if it wasn’t there you’d know something important was missing. Plus, incredible use of the color red, which is doubly impressive for someone using such a restricted palette.

You shouldn’t have this spoiled for you. You just need to read it.

But I’ll give you this little hint. Recently, I was watching Scooby Doo because I’m an adult now and there’s no such thing as ‘too many cartoons’. My Man Of The North commented that the mansion those ‘meddling kids’ were in looked a lot like the Trask mansion (from Ghosted)

He said, “So, Ghosted is kind of like a grown up Scooby Doo gang?”

I laughed. Because he is wrong. Oh, they hunt ghosts and humans truly are the villains of the piece. But, no….

Ghosted isn’t Scooby Doo kids. It’s a snake about to nom your face off.