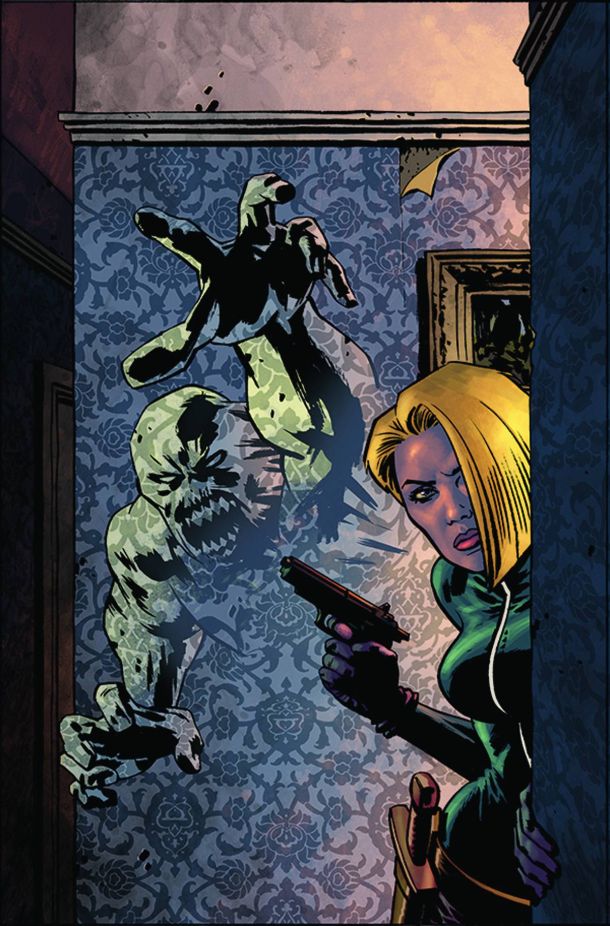 If the first offering of the Ghosted series wasn’t enough to hit you over the head and invest you in the series, then Ghosted: #2 certainly should be. In fact, Ghosted #2 clocked me over the head with a shovel and I’ve found myself chained to the series. By the Gods, let this be a good series!

I make no secret of the fact that I don’t really enjoy ‘oldskool’ comic artwork. Sure, it’ll be okay on a t-shirt, but it’s not something I want to look at in a comic book. If it’s meant to be a feast for the eyes, this style of drawing, colouring and shading leave me with the same empty feeling as a salad.

Which, I suspect, is exactly why the artwork in Ghosted #2 surprised the hell out of me.

There’s no departure from the straight lines or overall rigid nature of the colouring and shading. But there are little things. The devil is in the detail and in a haunted mansion, you can sure sneak some detailed devils in. I’m not saying go ‘Where’s Wally?’ on the pages. But the details in a background, or a shadow that isn’t a shadow, really add to the feel of Ghosted #2. It adds to the building of suspense that the story line hints at.

As may become a pattern in Ghosted issues to come, #2 seems to be going down the normal path you’d expect, then something happens to let you know to stop wearing your silly pants.

In this issue, we get to meet some of the Trask family and hear about their bloody exploits or, through the use of visuals, guess at what those exploits were. Then we learn more about this ‘rag tag team’ of crooks and cons. “Ahhhh” thought I, “It’s a bridging episode. Not so clever and mind blowing now, are you Ghosted series, there’s nothing you can do to……” then I got to the bit that reminded me of something George R.R Martin taught me at the end of Game of Thrones – Don’t make any assumptions when it comes to worlds that artists create.

This is shaping up to be an interesting series. If you want to get in on the next big thing on the ground floor – go away, hipster. Superman is your guy. You even have matching glasses. But, if you’re the kind of person (hipster or not) who enjoys anime like Psycho-Pass, if you were the kind of teenager who read up on serial killers (because you were perfectly normal, it’s just something I was interested in, okay?!), if you don’t mind swearing and blood with a touch of the paranormal, then this is the series you want.

Logical and cynical me says to reserve judgement on this series, but optimistic me loves it too much to say anything other than – This is going to be the awesome your life was missing. Crazy me says- MEOW!

After all that, you might be expecting a pretty high score for this issue. But because they did so well with the first issue, because they delivered the goods on the second issue (always a challenge), I want them to bend over backwards for a 10. I’m going to be marking the Ghosted series at a high level because they’ve set the bar at a high level.

7 out of 10 because I want them to blow my brains out (figuratively) with the next issue.