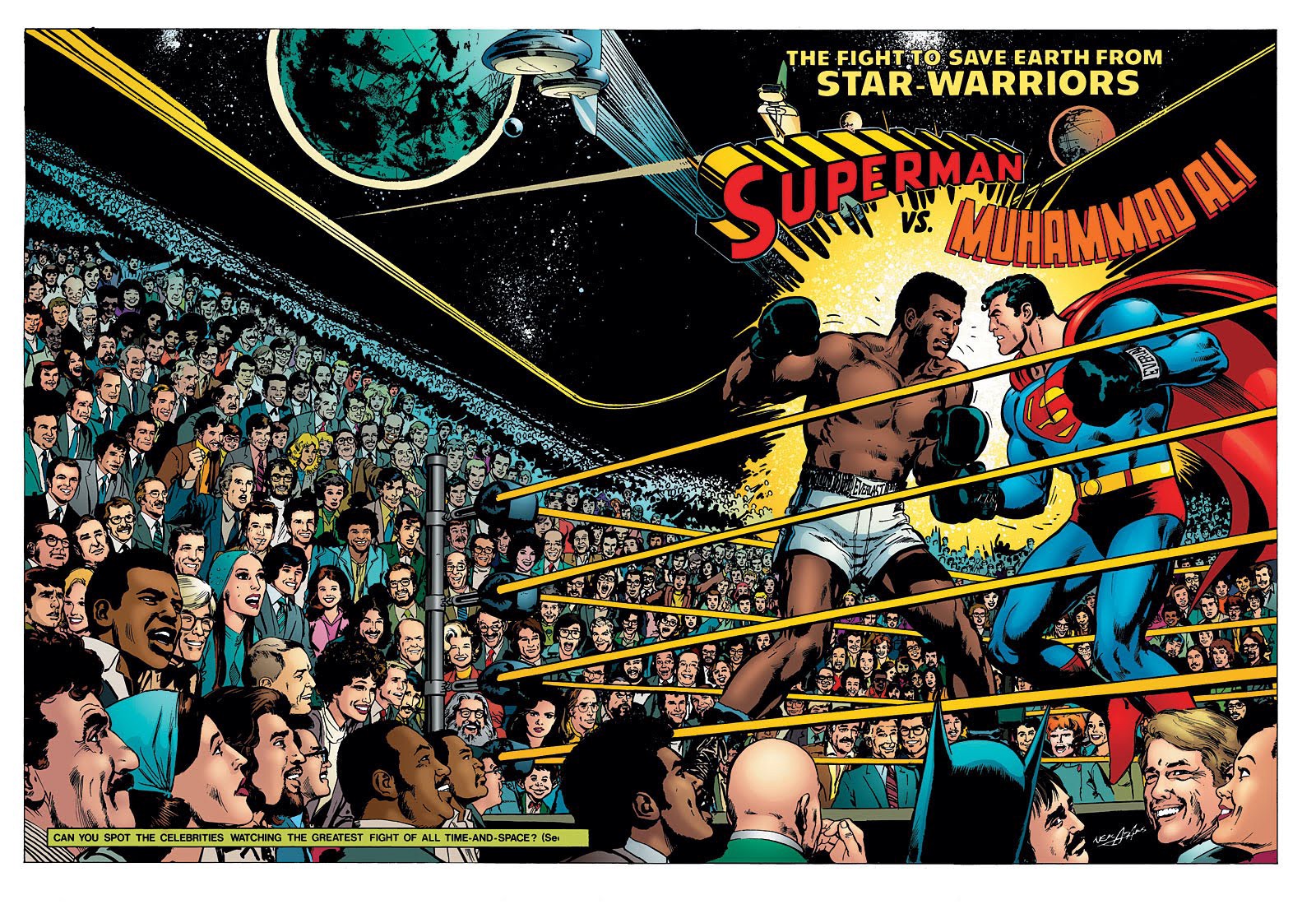 Comics: the art of telling a story with pictures in a sequential manner. Not to ape Scott McCloud too much, but I’m bringing up this point so that I can make mine. From the Sunday funnies to manga, to the webcomic, comics can be in almost any form.

The purpose of this series is to highlight formats of comics outside of the standard American single issue and comic strip. This time, the Treasury. 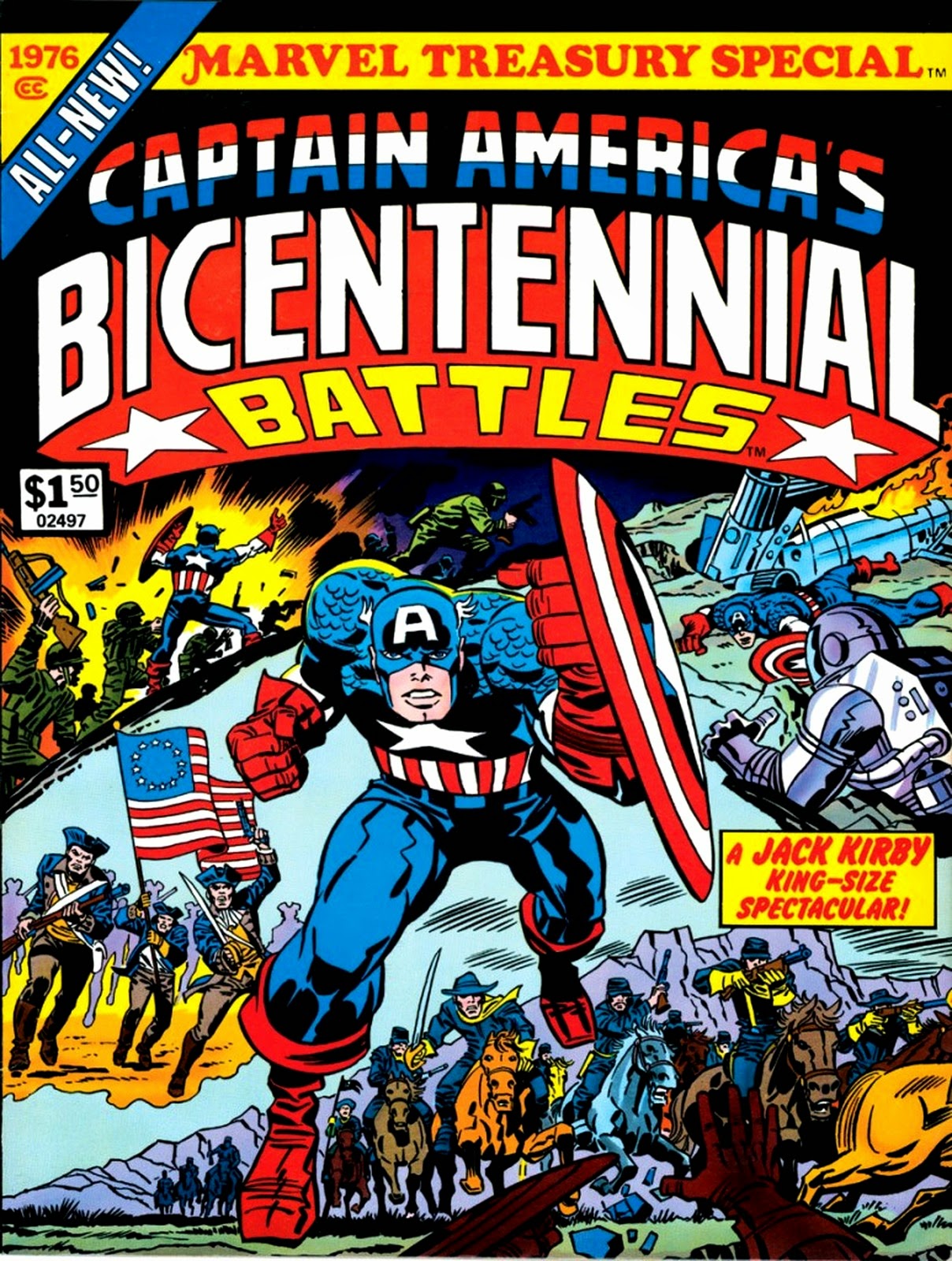 Treasuries are tabloid-sized comics usually measuring 10″x 14″, although that varies. the name comes from Marvel‘s popular Treasury Edition line in the 70’s the and early 80’s. Though tabloid-sized comics have been around since the forties, they didn’t become popular until decades later. Treasuries are great because you can see the art in much greater detail than the standard magazine size. The Pop-Art look of classic American superhero deserves to be seen in a larger format. It was perhaps the best way to view the art until recent years.

Marvel joined the oversized magazine game in 1974 with four different releases. Two of which were reprints of Spider-Man issues and one of which reprinted the Fantastic Four’s “Galactus Trilogy.” These are what would become the standard form – reprinting classic issues or important stories. As reprints weren’t readily available, this was a good plan. New readers could catch up on classic stories and old fans could see their favorites in a larger format benefiting the art.

An overwhelming number of the treasuries were Spider-Man or Hulk themed. Since they were Marvel’s TV hits at the time, they likely drew in more sales. Weirder series like Howard the Duck and the Defenders also got a Treasury, as did more popular properties like The Avengers and Conan the Barbarian. Captain America: Bicentennial Battles by Jack Kirby was Marvel’s only superhero treasury with entirely original content until their final Treasury, which was a crossover: Superman and Spider-Man. It was the sequel to the companies’ first superhero crossover, which was a Treasury format book published by DC.

Often Marvel would print adaptations of popular films as Treasuries. Adaptations included Buck Rogers, Annie, and 2001 by Jack Kirby, which would later receive an ongoing (standard-sized) series. There were four Star Wars Treasuries reprinting the adaptations of the first two movies from the ongoing Star Wars series.

Premiering a full two years before Marvel launched their Treasury line, DC put out an oversized reprint of issues of their Rudolph the Red-Nosed Reindeer comic. This became a yearly tradition, attempting to capitalize on the larger size (and cover price) to be given as gifts. A few months later, a SHAZAM Special edition was released reprinting DC’s then-recently acquired Fawcett characters in the format. It proved popular enough for SHAZAM to get a second one before Superman. 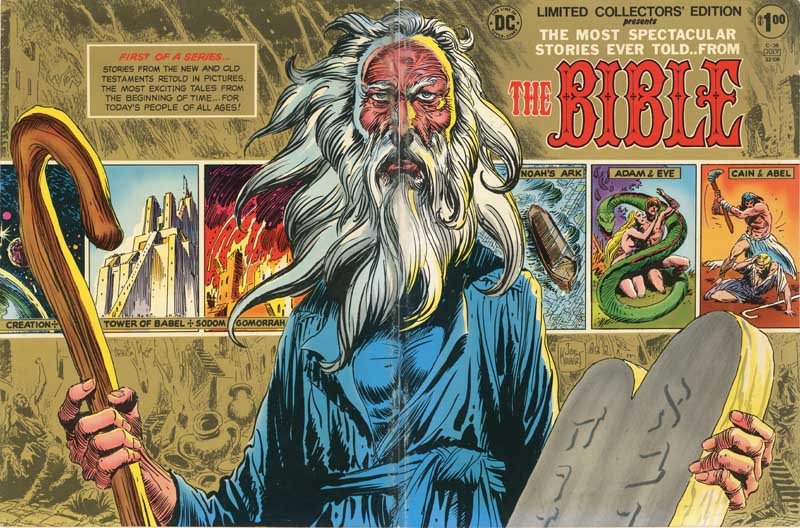 Sometimes they would have different titles like All-New Collector’s Edition or the DC Special Series, but they were the same format. Later, DC attempted to put out a Wizard of Oz Special Edition, but upon learning that Marvel was also attempting one, they put it out together, making the first Marvel/DC crossover, for the staff anyway. 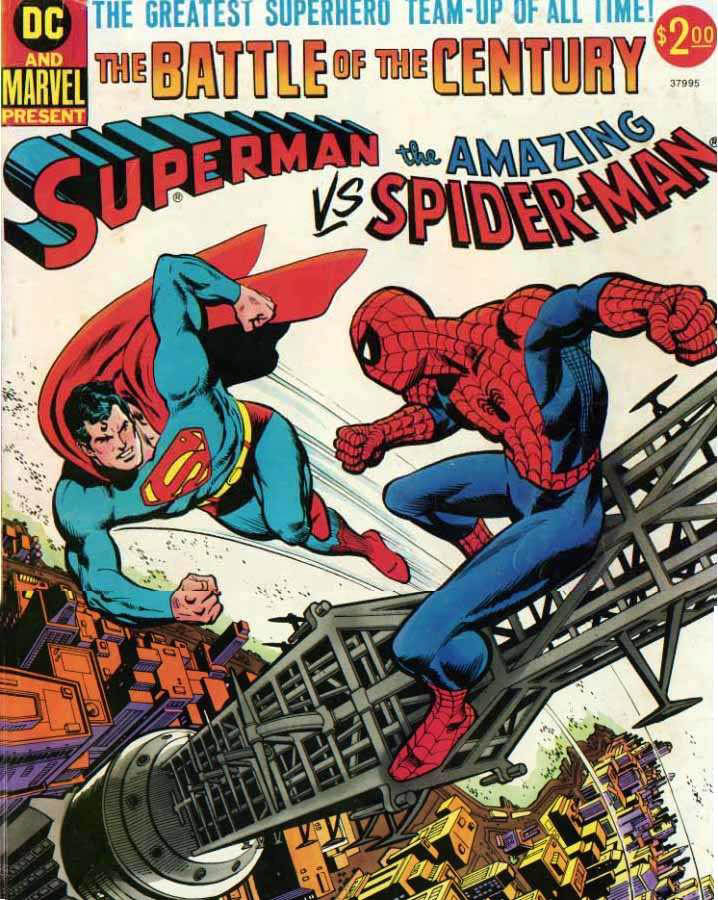 Besides Marvel and DC, other treasuries were also made. Mostly independent books, often from the “Underground Comix” scene (There’s a Fritz the Cat one for you Robert Crumb fans.) Over the decades Archie, Disney, and even Scott McCloud did one, but no company committed to the format like the big two. Some were cool, like a Tales from the Crypt reprint in 1991, likely to capitalize on the TV series. Others were just plain odd, like KISS 4K and Michael Jackson’s Captain EO. Then in the ’80s, the companies that set the standard for treasuries stopped putting them out.

Into the New Millennium…in Widescreen

Marvel and DC did not release the format for years, likely due to their respective Graphic Novel lines and the specialty market boom. That changed when DC released a series of Treasury-Sized Graphic Novels from 1999-2003 by artist Alex Ross (Kingdom Come) and writer Paul Dini (Batman: The Animated Series). The larger size was perfect for Ross’s more gallery-style art (many of the images in these books were later made into promo art.) They were also perfect for gaining the attention of bookstore audiences. Around the same time, a Justice League story by Mark Waid and Bryan Hitch was released. In a further homage to their past Special Editions, DC also published a Superman/Fantastic Four crossover with Ross providing the cover along with Dan Jurgens. 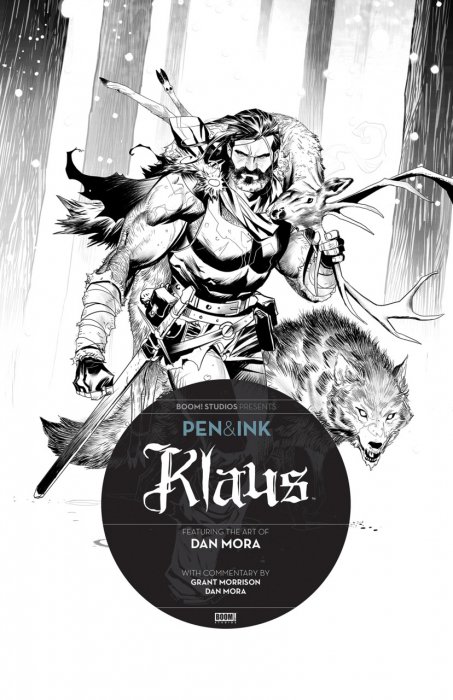 Image did some in 2003, but Treasury editions mostly vanished after that. The Jack Kirby Collector Magazine was published in sizes matching this, as were Kirby Five-Oh! and Kirby100, but as those are magazines and books, so their inclusion is nebulous.

Today, Boom and Image put out artist editions/director’s cuts in dimensions (or at least similar) of the Treasury. These are often the first issues of a series, in black and white, dissected with commentary or script by the creators.

Marvel recently brought Treasury Editions back in 2015. Two massive hardcovers were released focusing on the founders of the Marvel Universe, King Size Kirby, and Stan Lee: Marvel Treasury. These were larger than the original Treasuries but in the same spirit. Reprinted were famous stories including ones printed in the original Treasuries like Bicentennial Battles and the Mangog/Ragnarok saga. Several other collections were also made in this format, featuring Deadpool, Wolverine, Captain America, The Avengers, and the X-Men. They’ve also reprinted the Monsters Unleashed miniseries in a MONSTER-Sized hardcover, which is larger than a Treasury, but worth mentioning. 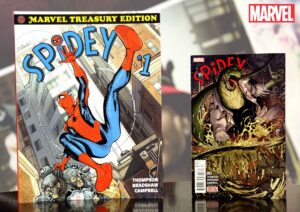 In 2016, Marvel brought back the paperback treasury, with roughly the original dimensions as the All-New Marvel Treasury. Starting with Spidey, featuring three issues of the same-titled series by Nick Bradshaw as well as the first two issues of Sara Pichelli and Brian Michael Bendis’ Spider-Man. There was also Women of Power, featuring the first issue of some of their most popular female heroines. The last one released so far is Guardians of the Galaxy, out in time for the second movie, featuring the first issues of several popular runs.

The problem with these newer Treasuries is that they’re left incomplete as opposed to the older ones which contained complete stories. Modern Marvel stories are mostly multi-part and only collected the first few chapters or less. Still, they do bring a nice focus to the art. Bradshaw and Pichelli’s work definitely benefits from the massive size. Women of Power features an Alan Davis drawn story. Davis is an artist who should have a treasury entirely to himself. 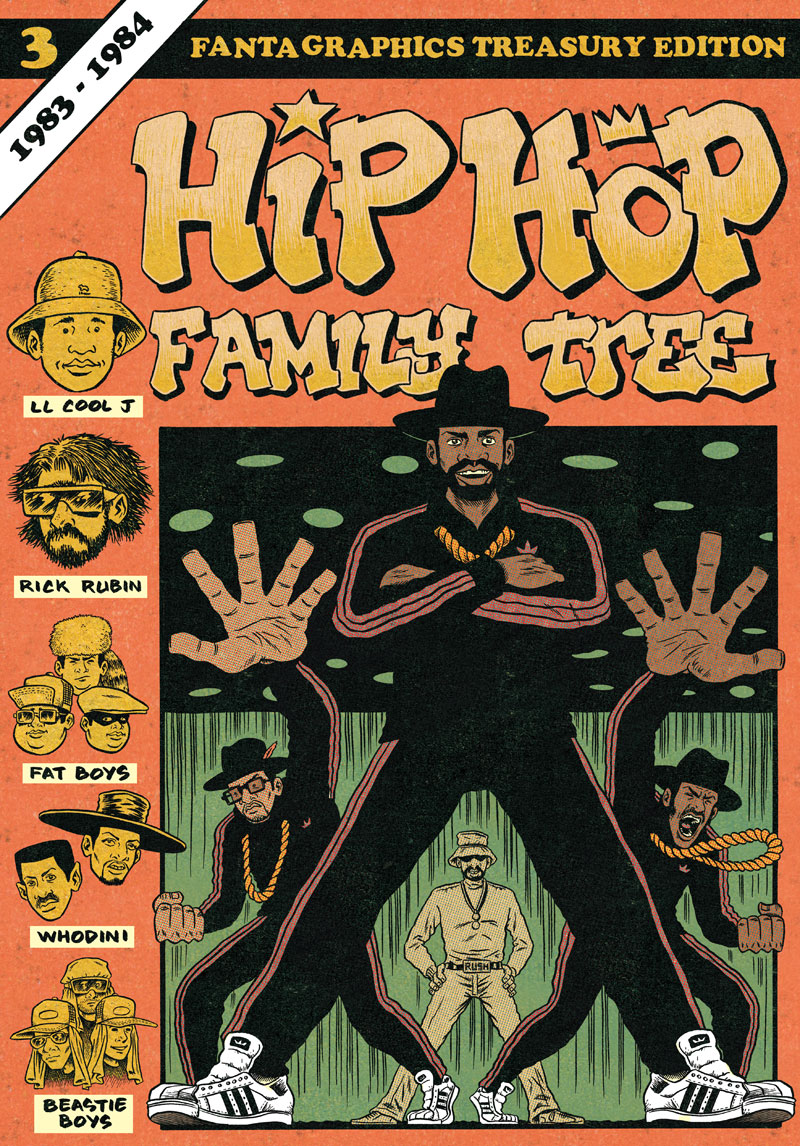 You may be thinking I’m leaving out perhaps the most notable treasury of the last decade of comics, but I”m saving it for last. Ed Piskor’s hit webcomic Hip-Hop Family Tree was notably reprinted in a Treasury format.  It’s a great series that tells the history of Hip-hop in the style of a ’70s-’80s comic, as I’ve talked about before. Actually a little smaller than Marvel’s but in ways more faithful than the current ones, HHFT is printed on newsprint that emulates the texture of older comics.

Piskor is currently working on X-Men: Grand Design, a retelling of the first 280 issues of the series in the style of Family Tree. The collected editions will be in the same format as his previous series. According to Piskor, it will look right at home next to each other on your bookshelf. He also expressed a desire to “right a wrong” as there were no X-Men treasuries during the first run, now there will be three.

Treasuries were a way to see larger than life stories even larger or a chance to read a crucial story you missed. Nowadays, they’re books for serious fans of the medium to enjoy. They still make great gifts and you should check out the format if you haven’t already. Who knows, it might be your next big thing.