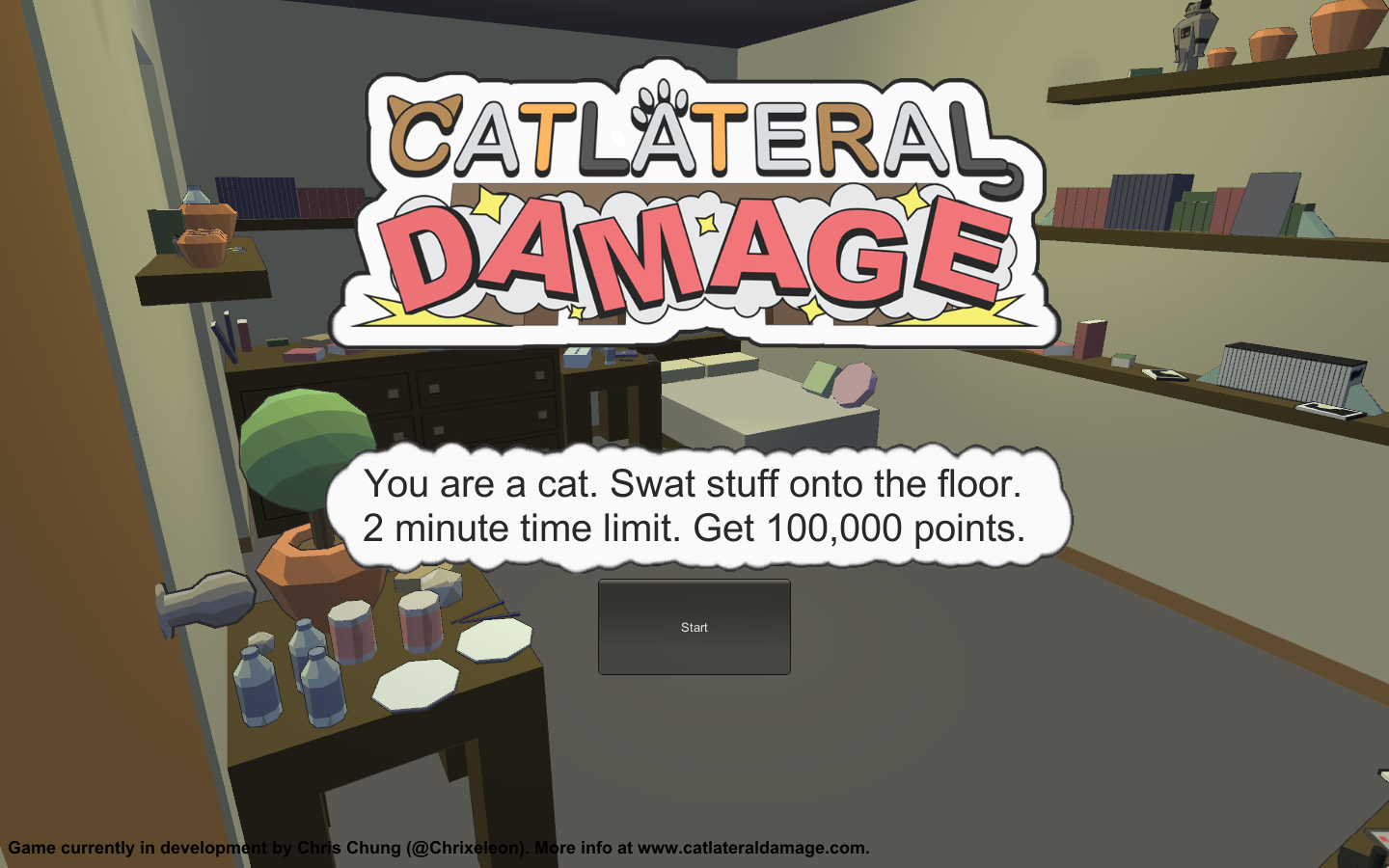 Cats. The internet loves them but your shelf and table space, not so much. They walk across your keyboard, sit on books and boxes that you need to pick up, and knock over everything not nailed to your desk– occasionally including the actual desk.

Everybody Wants to be a Cat

Now, you too can release frustration and general boredom by getting in on some of that destructive, no-cares-given action! “Catlateral Damage,” a new indie game from individual Boston developer Chris Chung, is the first “first-person cat simulator” to be Greenlit on Steam and is garnering lots of attention for its simple game play, addictive comic destruction, and hilarious premise:

Catlateral Damage is a first-person destructive cat simulator where your goal is to knock as many of your owner’s possessions onto the ground as possible. Feel what it’s like to be a mischievous cat and show your human who’s boss by eradicating his material belongings.

With simple gameplay similar to that of a PC first-person shooter, you make your way around your owner’s room, batting books, plants, food, toys, and expensive electronics to the floor and creating as much havoc in two minutes as you possibly can. What do you care? You’re a cat. Cleanup is not your problem. During gameplay you use your mouse to look up, down, and around you as well as to bat items to the floor, while using the arrow keys to move and the spacebar to jump. And you’ll need to jump– one of the most entertaining things about the game is figuring out how to get from ground level to the expensive-looking top-shelf items, by using only the room’s meager furniture and your adorable, destructive kitten wiles. 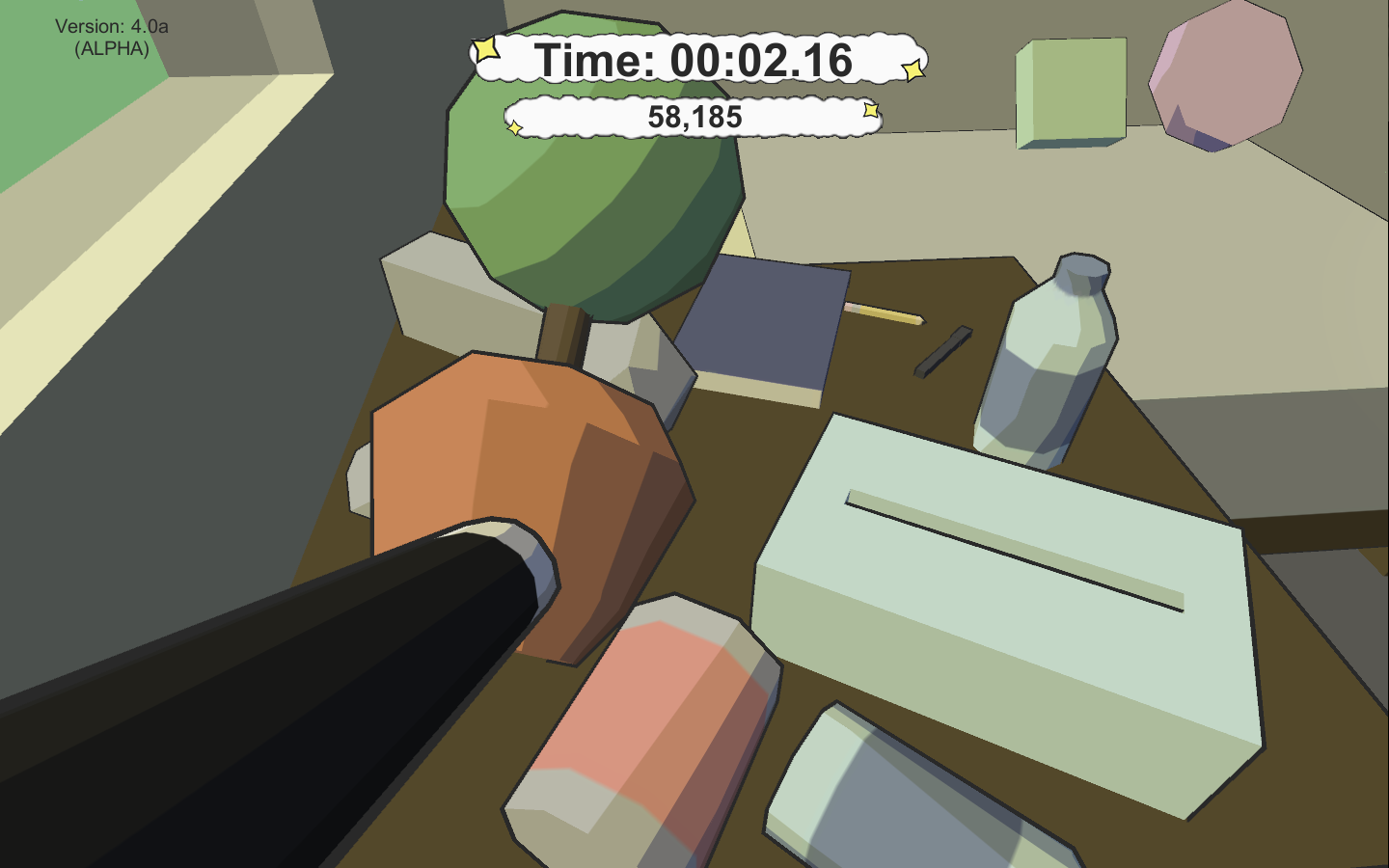 Sorry, were you using this? My bad.

Though the game had its original debut in August 2013 with only one playable room– the bedroom– Chung is currently working on expanding the game to a full-fledged FPCS for Windows, Mac, and Linux, as well as hosting on Steam. The newer, larger version of Catlateral Damage will feature gameplay that allows you to:

So if that’s all there is to it, why all the buzz? Why has this indie game gathered such a strong support base in just a few months? In many ways, exactly because of that simplicity. Catlateral Damage is a fun, ridiculous game with a fun, ridiculous concept and fun, ridiculous game play. “That’s really all there is to it. Catlateral Damage is about as basic and inconsequential as can be, and that’s exactly what I wanted from it,” says Nathan Grayson of Rock, Scissors, Shotgun. “Be a cat. Do total jerkstore asshole cat things. The end.” Many of the games other reviews also laud its simplicity as a major selling point. A boast on the game’s press page quotes Chris Priestman from Indie Statik, saying, “It’s a fun little game about making a mess, what’s not to love?” Most of the major criticisms of the game, that players wish they could explore more of the house or increase the game’s two-minute gameplay time limit, are already being addressed in the game’s upcoming full release. 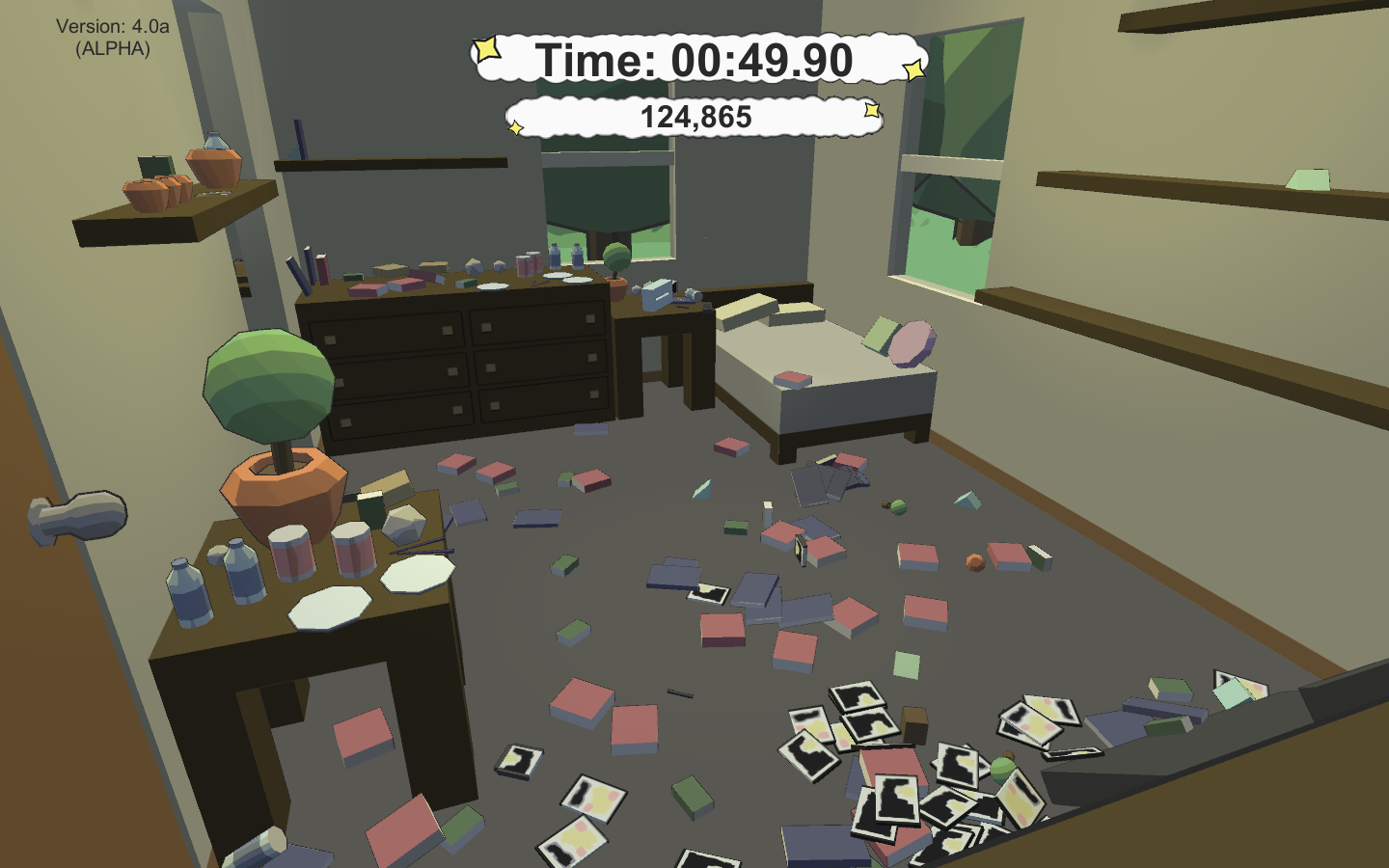 Unfortunately for fans, the full version of Catlateral Damage does not yet have a release date. Though Chung has confirmed that the game will be available for all PC versions and Steam, Chung is still developing the game wholly by himself– he makes up the entirety of Catlateral Damage, IndieDB‘s development team. Considering Chung is also employed as a Quality Assurance Tester, he only has certain hours available to work on his own game. It’s understandable that, with such limited manpower, the game’s development schedule would be slow, or at the very least unpredictable. At this point, there is no news about any fundraising campaigns or opportunities to help with development. If you’re interested in supporting the game, you can follow it for news and updates on the game’s Steam Greenlight, IndieDB, and Twitter profiles.

For those interested in playing the demo version of the game, you still have that chance. The 4.0a version of Catlateral Damage is available for fans to play on the game’s website, for download or for browser play.

Ever wondered what it was like to see the world the way a cat does? Ready to be the one knocking things to the ground for a change? Tell us a funny story about your own cat’s destructive prowess, or share your opinion of the game, in the comments!