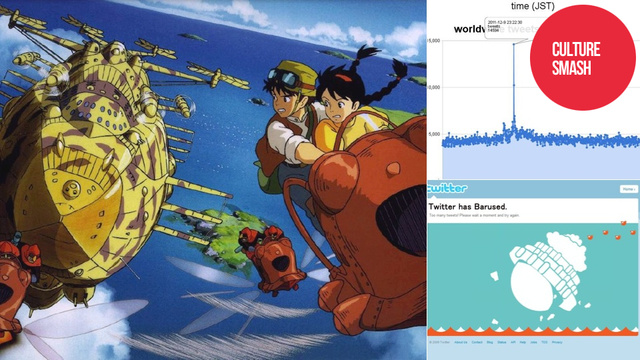 Twitter just hit a new record for tweets per second revealed by the company yesterday. The 143,199 tweets-per-second record was set thanks to the airing of a particularly famous anime film.

Hayoa Miyazaki is known for creating some of the highest grossing Japanese animated films of all time. He is probably the best known anime filmmaker in the US, if not the world. One of his fan favorite films “Castle in the Sky” aired on August 2nd, causing the massive increase in tweets. The new record completely blasts past the Twitter average of 5,700 tweets per second.

The previous record holder for most tweets per second was last New Years Day, which clocked in at 33,388 tweets-per-second. Apparently everyone was really excited about 2013 starting up.

Of course, this was not the first time that this particular Miyazaki film broke the tweets-per-second record. It also shattered the record back in December of 2011 when Castle in the Sky was the cause of an impressive 25,088 tweets-per-second.

These are not inspired purely by the awesomeness of the film though. People were seen planning the flash tweet mob on Kotaku well before the airing of the film. If it had been any other movie, who knows if they would have been able to garner the kind of numbers they did though.

On August 1st The Wall Street journal had an article commenting that bad things happen when films by Studio Ghibli, the people behind Castle in the Sky, aired alongside the release of US job numbers. It also mentioned that traders expected the August 2nd showing to be an especially bad incident of what they call the “Ghibli Rule.”

The Ghibli offering most deadly to markets is thought to be the one coming up on Friday: “Castle in the Sky,” or “Laputa,” as it is known in Japan. In the film, the protagonists send the city’s airborne fortress tumbling out of the sky with the magic word, “balus” which roughly translates to “destruction.”

So strong is the pull of “Laputa”–even apart from the Ghibli Rule–that during the last airing on Dec. 9, 2011, Twitter logged a then-record-breaking 25,088 tweets per second of fans posting “balus” at the same time it was spoken during the movie–despite a public plea from the social-networking site to hold off.

Whether the record breaking numbers were the cause of the Ghibli Rule or not, I’m sure everyone is just glad Twitter could handle it.