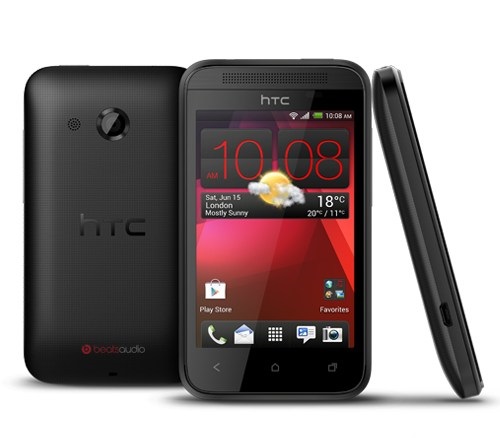 About this same time one year ago, HTC CEO Peter Chou said that the company would not be producing ‘cheap, cheap phones’ anymore, instead shifting focus to premium handsets in the future. But there seems to have been a change of plans. HTC has launched a new budget Android device – the Desire 200.

Sporting a 3.5 inch LCD display with an HVGA resolution of 320 x 480, the phone is powered by a rather slow Qualcomm Snapdragon S1 processor clocked at 1 Ghz. It also gets 512 MB of RAM, and 4GB of expandable storage. Fortunately, it is expandable with the on-board microSD card slot.

The Desire 200 has a 5 megapixel camera, with a 34mm lens that’ll let you shoot VGA video. The handset supports HSDPA, for speeds up to 7.2 Mbps. HTC hasn’t specified exactly which version of Android the Desire 200 will be running, but you could realistically expect it to be Ice Cream Sandwich. Of course, the phone will be running HTC’s custom interface – HTC Sense on top.

The Desire 200 also gets Beats Audio music enhancement, and will ship with a pair of in-ear headsets as well. It seems to be a good looking handset from the posted images, and should come with the satisfactory build-quality we expect from HTC.

Running the Desire 200 will be a removable, perhaps underpowered, 1230mAh battery. HTC is claiming 7.5 hours of 3G talktime and 812 hours of standby time on this thing.

Rounding up, we have the following:

HTC hasn’t announced the pricing yet, but the Desire 200 is listed for NT$4990 in Taiwan, which is roughly equivalent to $165. With the poor Snapdragon chipset on board, we’d say this is slightly overpriced for the package.