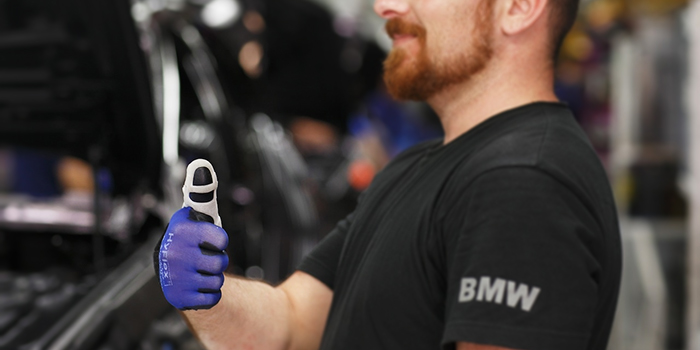 That’s right, car manufacturer BMW is taking a step towards better working conditions for their factory employees — starting with their thumbs. Using 3D printing technology, the company has developed a mechanism that fits over the thumb for employees whose tasks involve repeated strength and pressure on one hand throughout their work day. Here’s how, and why, this German company is giving its factory workers two thumbs up.

Each 3D-printed thumb support is customized to an individual worker’s hand size. This is done by scanning the worker’s entire hand to get the most accurate measurements. The device itself is made of a combination of hard plastic and soft silicone called “thermoplastic polyurethane”. Chemical manufacturer Huntsman describes the substance as “…renowned for many things including its: high elongation and tensile strength; its elasticity; and to varying degrees, its ability to resist oil, grease, solvents, chemicals and abrasion.” The stuff is pretty inexpensive too, making it an overall excellent choice for the design.

The plastic thumb is specially designed to be flexible when wearing and using it, allowing assembly line workers to continue to move and rotate their thumb normally, but with added support. It acts as a mini exoskeleton for the thumb, similar to medical orthotics used to support injured or strained body arts. The idea here, however, is to prevent injuries and strains from happening in the first place.

Workers on the assembly lines typically perform repetitive tasks with their hands which eventually cause strain and discomfort. The goal, says BMW, is to bring assembly line workers more comfort while performing these tasks so that they don’t get stress or strain injuries as a result of their job. It relieves pain and tension for employees while keeping the assembly line moving at a productive pace. A win for all parties involved.

Though BMW did not allude to it, this project may be an innovative way to continue to employ humans in areas which are rapidly being taken over by machines. There are limits to what the human body can do and endure in our ever-growing, globalized world. But if those limits can be lessened with the help of a non-invasive, non-pharmaceutical solution, companies can continue to employ people without possible wide gaps in output and productivity. And since the material to produce this particular device isn’t spendy, it’s an affordable solution as well.

This solution also makes sense because BMW has been using 3D printing techniques in its prototyping methods since 1989, about 25 years of experience with the technology. They also successfully created customized wheelchair seats for the entire British paralympic basketball team back in 2012!

The company ran a trial in their Munich vehicle assembly plant and reported “very positive” feedback from workers, who said the device was genuinely helpful in performing their tasks. It plans to role out the thumb supports to more factories and is looking into further projects in this area. Way to go, BMW!