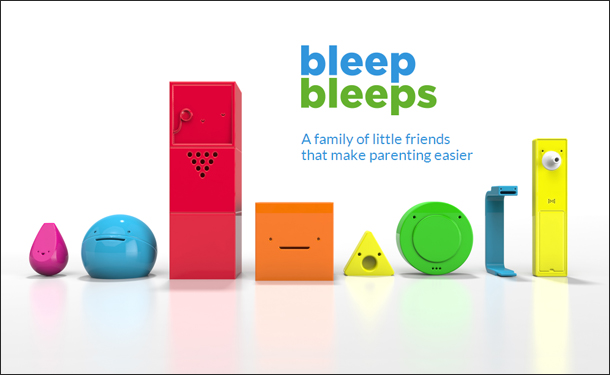 I think we can all agree that parenting is difficult at the best of times. Babies are pretty much miniature inconvenience machines, wielding powerful fluid-generating security systems with exceptionally skittish alarms. That’s why it’s always been important to get as much help as possible to keep stressed parents sane and babies’ soft fontanels intact. Offering delightfully simple designs with a child-friendly aesthetic but plenty of functionality, Bleep Bleeps have popped up to contend for places on top ten baby shower gift lists everywhere. Sweetly-named cool new gadgets with cheery faces could be just the thing for colorful baby bedrooms; let’s take a closer look at the line-up.

Alright, alright, that heading doesn’t quite work; there’s no baby-making Bleep Bleep. That would be strange. That said, if a gentleman is deploying a payload of questionable consistency, he can put his mind at ease by consulting Master Bates, the friendly sperm count consultant. If his lady friend wants to check up on her ovulation schedule, she can visit the bathroom with the helpful and trustworthy Olivia P. Sticks. Basically, while Bleep Bleeps won’t do the job for you (robot/human offspring being generally frowned upon), they will make it easier for couples to rule out possible problems. I just hope they don’t come to life at night, because Master Bates would look seriously sinister slinking about in low light conditions.

After that saucy twosome, things get a lot more wholesome. David Camera, for instance, is a dapper baby monitor built in the image of British PM David Cameron but possessing of more realistic human qualities. Biting political humor, everyone. Sammy Screamer, however, waits near your child and informs you of nearby movement. There are eight gizmos altogether, and each one connects to a phone app through Bluetooth, making it easy for anyone with an Android or iOS smartphone to put together a monitoring hub.

New parents need to get away occasionally, and when they do, it’s time for a babysitter. The Bleep Bleeps would not only make the babysitter’s job easier but also give the parents peace of mind with the ability to check up on things remotely (assuming smartphone access) in a manner rather more convenient than communicating with the babysitter directly. I’m not suggesting that babysitters are untrustworthy, mind, just that parents can get stressed even with the most trustworthy guardians while cold hard data offers rigid reassurance.

Furthermore, it stands to reason that the collected data would be useful over the course of a childhood. While I don’t imagine anyone would suggest forgoing hospital visits and relying entirely on Bleep Bleeps, Tony Tempa, for instance—the ear temperature monitor—would help avoid the panicked rushes to emergency rooms that often result from the combination of worry and ignorance. It would be great if the Bleep Bleeps could come with an exhaustive manual with advice from medical professionals on what to do with the information available to them, though I’m sure they could be bundled with other products to create a kind of super parenting starter kit.

I don’t have any kids, but I already want one. Look at Ultra Stan, the little green ultrasound scanner! Look at his squished nose! I’d have him scan my stomach, or maybe investigate the contents of different fruits. More seriously, though, he’d look very much at home in a nursery, and there’s something very endearing about the idea of parenting devices that double as baby toys. After wiping a nose, changing a diaper, and trying to locate an antidote for toxic child vomit, the last thing anyone needs is an assortment of disparate utilities to distribute and configure. Some unity would save some precious time for sleeping or doing jigsaw puzzles.

Now we know what these pint-sized helpers are, it’s time to get to the really important part. If you want one or all of these sleek little oddballs, oozing with rage at your inability to purchase them immediately, well, things are about to pick up with the advent of a Kickstarter campaign. You can check it out here, so do just that. Think about it: do you want to support yet another variety of iPhone case or Android device, or do you want to back cute bold-colored baby protectors? Seems like an easy decision to me. Throw a little money their way, you cheapskates! Or a lot of money if you’re particularly wealthy and/or a parent, or just careless with money, or a fan of minimalistic design, or so dazzled by my dancing words that you feel compelled to do what I say even though you’re not sure why. Look at their precious little faces!