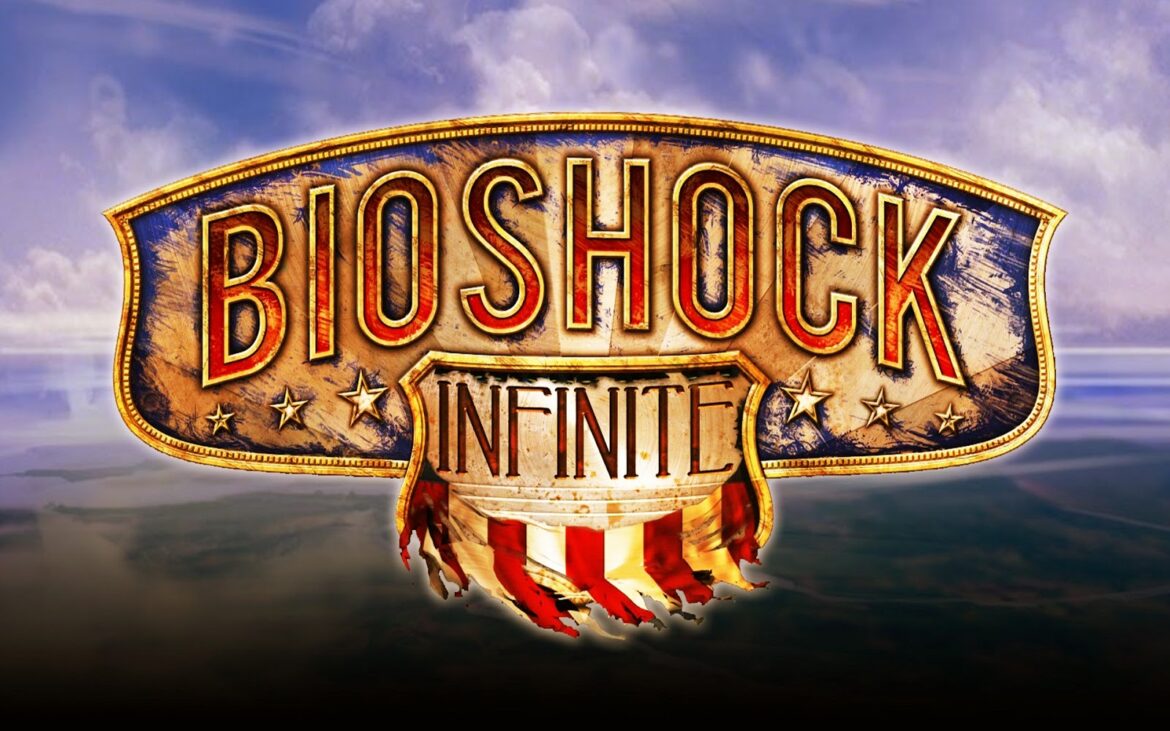 “Booker, are you afraid of God?”

And so begins one of the greatest games I have ever played. Revolutionary. Game-changing. Magnificent. Extraordinary. I run out of superlatives trying to sum up exactly what Bioshock Infinite has managed to achieve. More than anything, I think, Bioshock Infinite is an important game for the industry. Bioshock Infinite  represents proof that a game can have both commercial success as well as the ability to tackle important social issues in a meaningful way. Themes tackled Infinite range from religion and fanaticism, idol-ism and human nature to the very nature of entertainment. It’s a game that, depending on your beliefs and values, may offend you. I don’t think that’s necessarily a bad thing. If you find yourself offended by it, take a minute to understand why you’re offended and then create a retort. Write a blog, or an essay, or a book if you have the time, arguing why you think the points raised by Infinite are invalid. And thus academic debate is created. And for a game to have the ability to create that debate, well, that’s important. 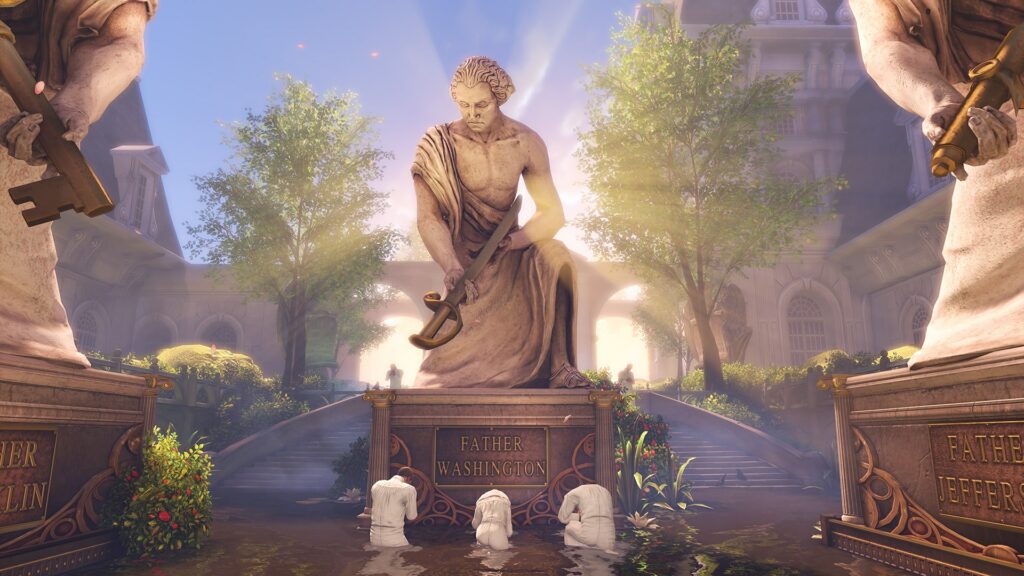 But let’s go back a step. In Bioshock Infinite you play Booker DeWitt – a former private investigator, tasked with finding ‘the girl’ in the floating city of Columbia. You start the game at sea, in a storm, at night-time. Then there’s a mysterious lighthouse. Sound familiar? It should. It’s an obvious nod towards the original Bioshock. After that, it all starts to get a little bit different. Instead of being transported to the depths of the ocean you are shot up into the clouds, and into Columbia – a city in the sky ruled by the self proclaimed prophet, Zachary Hale Comstock.

In the first game, you were exploring the lost city of Rapture – a decaying, deserted, broken city that had long ago lost its marbles. Columbia, on the other hand, is a thriving, bustling metropolis. The dark corridors of Rapture are replaced by sunshine and blue skies. Children play in the streets, traders hawk their wares, barbershop quartets harmonize in gardens  . . . and, oh look, there’s a fair on. It all seems whole and good. A shop keeper, having left his shop open and untended, trusts that his customers will leave the right money on the counter. People smile and nod at you as you walk by. Yet, there is something slightly dark going on behind it all. That much you can sense intuitively. But that’s all I’m going to say. By telling you anymore I risk spoiling it for you.

Even if you take nothing away from Bioshock Infinite apart from the actual, mechanical, ‘gaming’ experience. You wont be disappointed. Take away the issues that the game raises, as well as the story, and you still have a brilliant shooter. You shoot guns in one hand and use ‘vigors’ in another. Vigors can be used to do cool things like throw fireballs or turn enemies into allies. These provide the basics for some brilliant game-play. Once, I used the possession vigor, expecting my enemies to turn on each other. Instead, they beat themselves to death with their own clubs. It was a shocking moment, but one that encapsulated much of what Infinite is about – the shocking, the bizarre, the unexpected.

Things get really interesting when you find ‘the girl’, Elizabeth. In combat, Elizabeth has the power to open portals from which you can select objects to aid you in combat. Extra ammunition, for example, or a piece of cover. Combine these elements with the ‘skyrail’ -which gives DeWitt the option to move very quickly around the battlefield- and you have combat that is complex and satisfying. Unlike some AI companions, Elizabeth never becomes a burden. At no point does she become an irritation and you never have to babysit her. Which is rather refreshing. 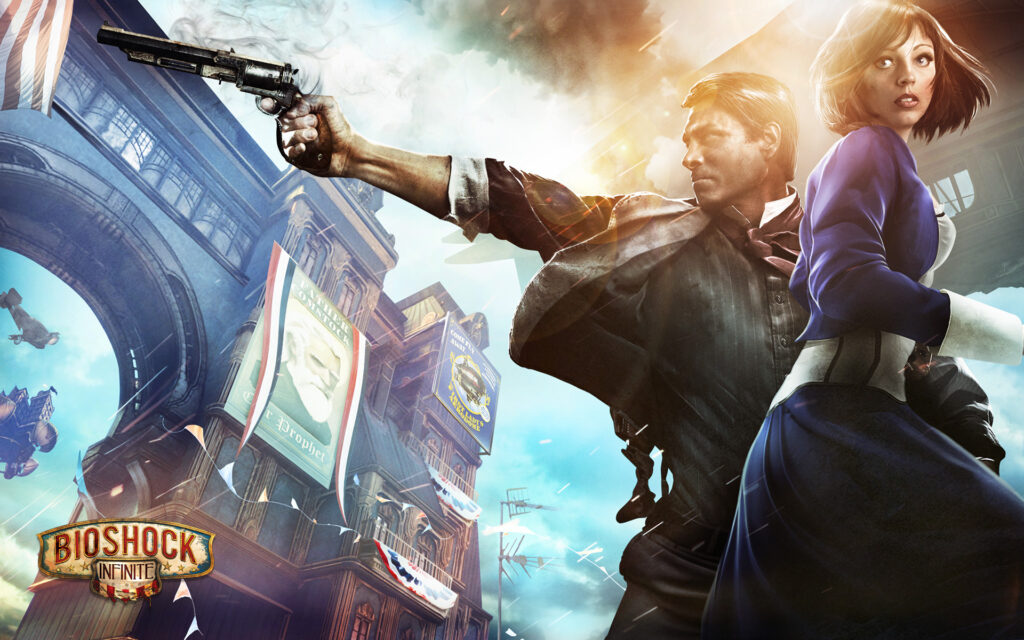 What Elizabeth is, however, is an important and welcome companion. The friendly chatter between DeWitt and Elizabeth is touching and the characterization of the two characters is superb.  Without wanting to give too much away, the relationship between DeWitt and Elizabeth is extraordinarily well done. Infinite  is video game story telling at its finest, and it’s rather hard to talk about without giving anything away. Needless to say, Infinite‘s twisting story is one that you’ll not soon forget.

Infinite is lovely to look at, too. Graphically, the game is impressive. That’s almost a given. What I really mean is that the game has been designed beautifully. It’s all early twentieth century design with a steampunk/science fiction twist, and the attention to detail is incredible. The world feels alive and real – it’s enough for you to to suspend your disbelief and truly believe in the game you’re inhabiting. When you’re not fighting for your life, you are encouraged to soak it all up, to explore the incredible world that has been created. 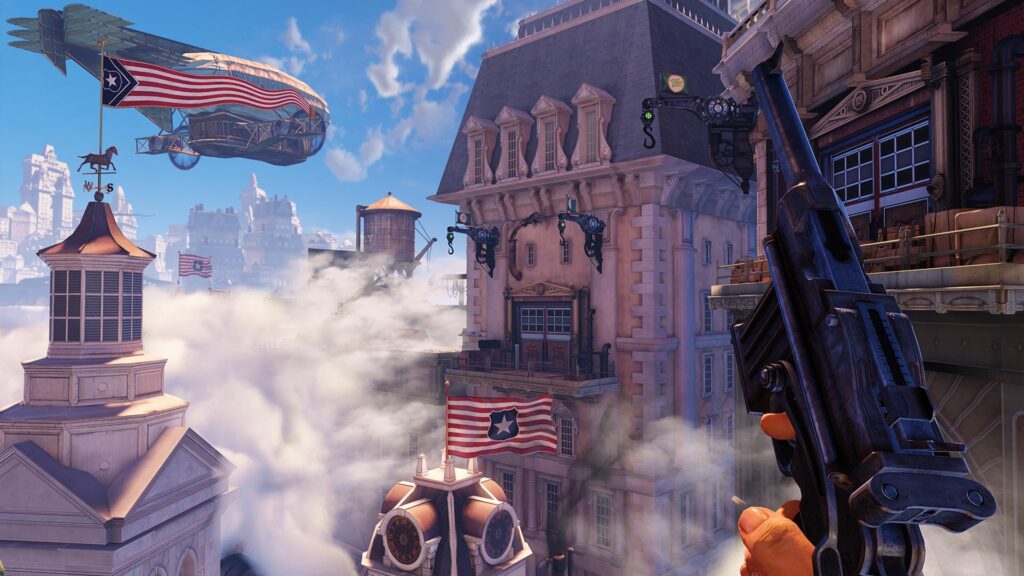 I feel that I have not done this game justice it deserves. At its most basic, it is a brilliant shooter. If it were that alone, I’d still encourage you to buy it. But it is so much more. It’s an incredible, rip-roaring, sci-fi adventure with an emotive story full of twists and turns. Infinite‘s complex characters will not be forgotten by anyone who delves into the game and the ending … well, the ending needs to be experienced. I will say no more than that. Above all, Infinite has something to say about society and religion especially. It will no doubt spark debate. It will no doubt offend some people. But when there are those who question whether our industry is worthwhile, whether games should be considered as an art form – we can all point with conviction to this game. Infinite is the proof that games can be more than just ‘games’. Proof that they can be considered an art form like any other visual media. Bioshock Infinite will go down as one of those rare must-play games. At the risk of sounding overly melodramatic, I think it will go down as a stepping stone in gaming history. No, more than a stepping stone, a whole bridge.

The Bad: The occasional glitch

Spotify Looking to Enter The World of Video on Demand

Well first off, you got the opening quote wrong. When you fix that I’ll be more thorough…

See my only problem with Bioshock is it is too pretty, it lacks the dark gritty undertones that Bioshock 1 & 2 had which is a shame