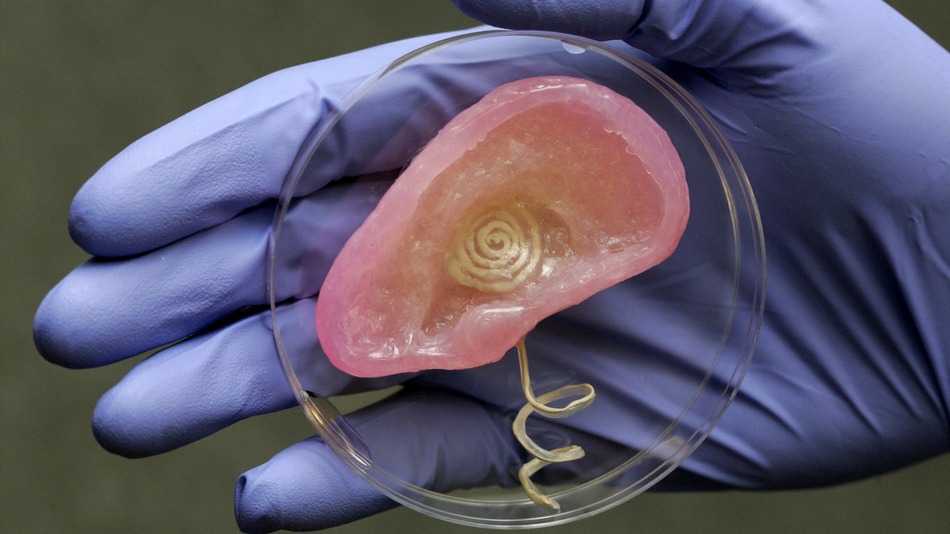 Research done at Princeton University is bringing the world of Terminator and cyborgs ever closer to us. The Princeton scientists work in cybernetics has resulted in a 3-D printer and a bionic ear, which. Its success, the inventor predicts, will lead to bionic supplements to the human body that empower humans and connect them to the technology world.

The researchers used their 3-D printer to make a a bionic ear. It consisted of an ear-shaped chunk of silicone and bovine cells that were infused with particles of silver in the shape of an antenna. The antenna picks up radio signals and works like an ear; it can receive and transmit sound.

The process worked by putting bovine cells mixed in a liquid gel into a petri dish. This was then placed in the printer and then tiny particles of silver were added. The printer shaped the mixture into an ear and formed the silver into an antenna. The ear was soft and translucent after its formation. For 10 weeks, it was cultivated and continued to grow; its cells multiplied and a flesh color and hardened tissue then formed around the antenna. Graduate student Manu Mannoor explained that a matrix was secreted by the cells, a space between the organism made so that each had their own living space. This is no piece of metal or mechanical hearing aid; this is a living, biological ear. They 3-D printed cells and nanoparticles, and I’m not talking about some invention of theirs, I’m saying they printed a bionic ear using an off-the-shelf printer.

The research team tested the antenna’s abilities to pick up radio signals. They attached electrodes onto the backs of the ears as they were being printed. They then played music such as Beethoven’s “Fur Elise” and watched as the ears responded.  The electrodes transmitted the signal along wires to a set of speakers, and the music flowed out quite perfectly. So perfectly, you might say it’s actually better than the real thing. The scientists proved it is too; the ear can “hear” radio frequencies far beyond the range of normal human capability. It is a fully functioning organ that not only replicates a human ear, but surpasses it using embedded electronics.

However, the scientists admit that at this stage, the 3-D ear cannot replace a human ear on a human body. It was, rather, a test for the cybernetic 3-D printer. Cybernetics is about combining biological tissue with electronics and assistant professor of mechanical and aerospace engineering Michael McAlpine was interested in taking the field to a new level. McAlpine led the scientists in their research at Princeton. His primary goal was to explore an efficient and versatile method of combining electronics with tissue, but he believes their success to be only a small step, one that will lead to a great and innovative future.  He stated, “What we really did here was actually more of a proof of concept of the capabilities of 3-D printing.” He went on to explain that most of the time printing is used for passive objects, such as figurines and jewelry, but that this printing was different since it involved living tissue and created an object that was better than a human ear.

McAlpine stated that “there are mechanical and thermal challenges with interfacing electronic materials with bionic materials.” His work, he believes, takes a new approach to those problems. Typically, scientists used a 2-D sheet of electronics and a surface of the tissue; McAlpine’s strategy is to “build and grow the biology up with the electronics synergistically and in a 3-D interwoven format.”

McAlpine also believes that this technology will soon lead to synthetic replacements for actual human functions. He believes such technology as this ear could provide humans with a sixth sense, giving our bodies the ability to connect to electronic devices. He stated, “As this world becomes a more digital and electronic place, I think ultimately we’re going to care less about our traditional five senses and we’re going to want these new senses to give us direct electronic communication with our cellphones and our laptop devices.”

What I get from all of this is that cyborgs are coming. Soon. And anyone, anywhere could end up being one. And also, life could be a whole lot cooler, with sixth senses and technological brothers.