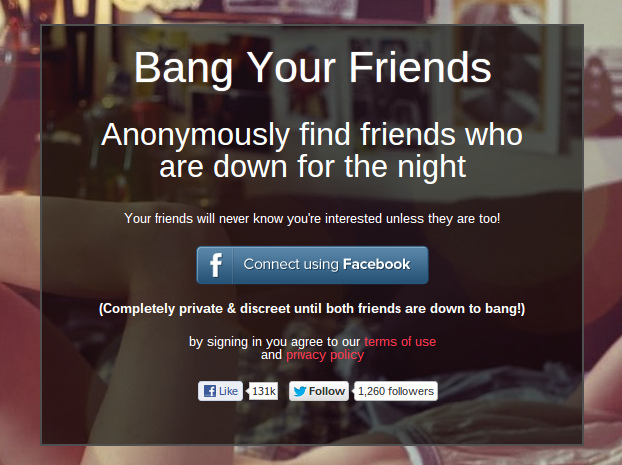 Bang With Friends is a new Facebook add-on allowing users to choose which friends they’d like to hook up with. When two friends mutually select each other as hookups, they’re alerted to the match without any of that flirting or drink-buying of an old-fashioned date. Selection is anonymous until two friends mutually select each other, although you can see which of your friends have installed Bang With Friends, just like with other Facebook apps. And you’ve got to trust that a new Facebook update and the anonymous developers of Bang With Friends won’t let your hookup list slip. Bang With Friends says they’ve connected thousands of couples in the short time that the app has been live.

After all of Zynga’s copyright issues (Creating knockoff clones of indie games! Attempting to patent -ville!), I love to see indie developers ripping off a Zynga naming convention.

I checked out Bang With Friends (For research purposes. Are you listening, other people in the coffee shop?), and got a pretty awkward list of possible hookups. Bang With Friends took note of gender, and presented with me male hookups only.  It didn’t account for orientation, suggesting friends who are very much “out” on their Facebook profiles. Bang With Friends also suggested a lot of married men, expat friends around the globe, and hilariously, a fake account for a fictional character.

Social media makes us ask new questions of ourselves and society: Am I down for a no-strings hookup with a character from a cancelled video game?

But isn’t this basically what the earliest version of Facebook offered?

In it’s earliest incarnation, Facebook used to be a small site for college hookups. You’d fill out a profile that asked the college hookup essentials, like your gender, orientation, college year, major, and relationship status. If I recall the details, you could choose whether you were on Facebook looking for friends, looking for a relationship, looking for a hookup, or the slightly-desperate option, looking for whatever I can get. In that time before privacy worries, you’d even include which dorm you lived in, and where your classes were. Of course, when Facebook was new, users’ biggest concern with photos was not so much getting tagged in embarrassing kegger pictures, but getting time on the computer lab’s scanner to add a photograph for a profile picture.

Then, you could find friends who were the right gender, age, location, sexual orientation, and looking for the same type of relationship. You could also use Facebook to see if the hot guy from Roman Literature class had a girlfriend, without having to actually ask him, or check the names of classmates after enough of the semester has passed and it would be awkward to ask.

Updating Facebook’s Hookups With A 2013 UI

Seems like Bang With Friends is offering the same thing early Facebook offered, only with poorer search filters, a much wider user base, and a one-click come-on.  Just tick which friend you’d like to bang for the lowest-effort connection possible.

In a lot of ways, Bang With Friends is just updating Facebook hookups for the way we use social media today, like displaying potential hookups in an image-board and inviting users to Like them. I sort of hope the next incarnation is leaving post-hookup, Amazon style reviews: “Five stars! Would bang again!”

What do you think? Symptom of moral decline? Facebook curiosity? A great way to find your next date?