When people go on a date with someone they’re not sure about, they usually arrange with some friends to call them with an urgent message about 10 minutes into the date. At least, that’s what some girls who sat behind me, told the entire cinema in very loud voices, before The Hobbit: Desolation of Smaug began.

That strategy is all well and good if you have friends. But if you like to fly solo and still end up on a date, how do you get out of it when it starts to take a turn for epic failure?

Good news, there’s an app for that. 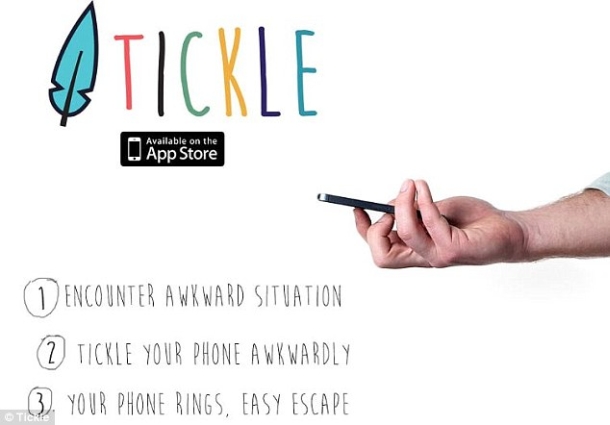 A Tickle Away From Ending The Date

It’s only in it’s Beta stages at the moment, but the Tickle App is set to redefine how useful your friends are.

The Tickle App is not only the equivalent of a trap door to get you out of awkward situations, it also does it in a timely manner. You don’t even have to wait those 10 grueling minutes into the date, or wonder if your friend remembered that tonight was the night you were going out with that guy who only knows how to talk about sport. No, the Tickle App can read your mind. It picks up on nervous movements, like tapping on the table and triggers your phone to ring. The Tickle App renders your friends useless.

And if you don’t want to wait for your nervous energy to reach boiling point before the Tickle App works, you can just ‘tickle’ it and get it to call you. You can’t do that with most friends.

Thank you, Julius Sumner Miller impersonators! (For anyone who doesn’t know who he is, he was our version of Bill Nye. If Bill Nye and the Angry Beavers could be spliced together in some beautiful experiment of gruffness).

We could use technology speak all day to confuse everyone about how this works, but it’s actually quite simple.

There’s a little machine in iPhones that allows them to measure stuff (the accelerometer). Not like, kitchen cabinets or anything like that. It measures force. In this instance, the Tickle App is using the little machine in the iPhone to measure how awkward the situation you’re in, is.

So, if you’re tapping on the table or fidgeting a lot, then your phone will ring. You can make up some wild story and make your classy exit. You can even set up the app in such a way that it has a photo and name of someone on your phone, so that it won’t arouse your date’s suspicions. Though, if you’re on a first date and they’re demanding to ‘see’ who is calling you, then at least you know you’ve made the right choice to bail early.

But there are. I know because I’m a pessimist. A pessimist surrounded by half full glasses of water and full cups of coffee that are only going to end up half full anyway…..

Remember that little motor we were talking about before? It’s all well and good for it to measure when you’re anxious or when a situation is awkward. But first dates are generally some of the most awkward things that can happen to people, apart from doctors appointments. Couple that with someone who doesn’t usually get out and about usually and your phone will be ringing every 5 seconds!

Also, it’s not just you who is nervous and maybe not acting like their natural cool self. What if you miss out on an awesome opportunity to get to know someone, just because you gave them only a few minutes of your time and had an app to get away from them?
Technology is great for connecting to people. But sometimes it really blinds us to the opportunities we have right in front of us. If Buttercup had anything like this app (or Facebook or access to job seekers websites) she would never have fallen in love with Wesley. Then, the one kiss that was the most passionate and most pure of all time, would never have happened! And Inigo Montoya would never have got to kill that guy who killed his father! IT WOULD HAVE BEEN TERRIBLE!

Also, the app is only available on the iPhone which means if you’re an Android user or someone who only uses a Feature Phone (ie- Not a Smart Phone) you’re doomed to relying on your friends, or sitting through a terrible date because your friends cannot be relied upon.

Apart from that, the app will only ring you. It doesn’t give you an awesome story to get away from someone.

But it isn’t all bad.

Sure, it’d be great to have the app give you a story to get away from people. But you can think of it like you’re own private RPG game, where you are the Dungeon Master AND the main player. Also, you rolled +10 Charisma and +15 Acting Skill, so you’ve got this!

As you’re not going to see this person again, but you also want them to think you’re super cool, you can make up any story you like. My personal favourite that I’ve never been able to use “What? The corpse came back to life? Dammit man, this is what we’ve been preparing for all these years. I want contamination check points set up and a 10 mile radius around the site. We can’t let it spread!”

If you use the app wisely, if you give people some time to relax and be cool, then it’s a great little safeguard that might help you relax on a date as well. And of course, it also sounds incredibly helpful for quick exits out of dates that are a waste of your time. Yes, yes, give everyone a chance. But the truth is, some people really are just terrible and the sooner you get away from them and back to playing Skyrim, the better.

You can start making your friends redundant here at the Tickle App website.

With this app in mind, what would be your escape plan? (Rule 8: When In Doubt, Always Know Your Way Out).