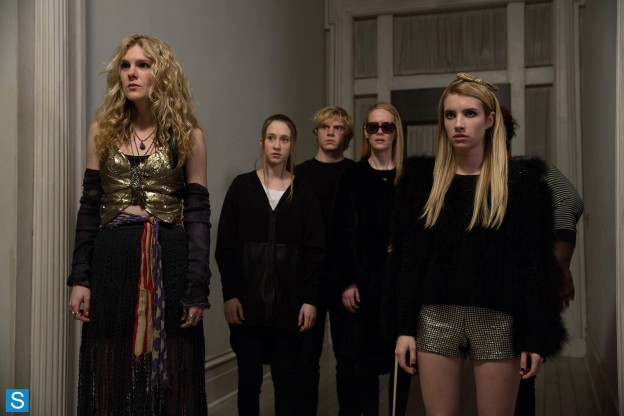 SPOILER ALERT! I mean it. Don’t let this warning go unheeded lest you ignore it and learn the shocking truthbombs that exploded in the latest episode of American Horror Story: Coven. Got it? Good.

I remember when my girlfriend and I were sitting lackadaisically through one of American Horror Story: Coven’s later episodes of its first half and simply not deriving any sensory pleasure other than utter frustration. Nifty death sequences that made us bizarrely mournful were stomped viciously upon by the neat and tidy resurrection and obnoxiously spacey ‘Holy crap! That was weird! Maybe I’m the new Supreme!’ aftermath monologue. Pissed off though we were, my girlfriend was repeatedly optimistic as she kept reminding me how creators Ryan Murphy and Brad Falchuk always tend to save the really insanely dramatic shock and awe for the very end.

As it turns out, my girlfriend was just as clairvoyant as the dearly departed Nan as we were treated to a veritably balls-to-the-wall drama-chocked penultimate episode with “Go to Hell.”

How balls-to-the-wall am I talking, exactly? So much so that the three marquee leading ladies (Jessica Lange, Kathy Bates, and Angela Bassett, whose death from last episode was merely confirmed in this episode) as well as Danny Huston’s brooding Axeman are all officially dead, paving the way for the finale’s grand magical Olympics to the death referred to as the Seven Wonders, which was outlined and explained with great detail in the teaser using an old-timey montage sequences.

“Whoa, whoa, whoa now, David!” you might be shouting, using your hands as a duo of stop signs. “You’re really just gonna gloss over the three main characters’ deaths just like that?”

Honestly, why shouldn’t I? It’s not like it wasn’t going to happen or anything like that. From the very beginning, it was painfully obvious that Fiona and the Axeman’s relationship was going to end destructively based on the construct of it all. The succession of Fiona’s health spelled an increasing deflation of her attachment to Axeman and the Axeman’s lack of any real purpose in the mortal world always made for an attached-at-the-hip clinginess to Fiona that, if severed, definitely would not end well.

So why was I not surprised when Fiona revealed her indifferent feelings towards the Axeman and wound up with an ax being flailed mercilessly at her spinal column by said Axeman? You can probably guess. And how does the Axeman meet his fate? The same way he did when his character was first introduced late in the first half of the season. Again, surprise is practically unobtainium in the realm of American Horror Story: Coven viewership.

I will admit, though, that I was surprised and disappointed when Kathy Bates’ Delphine LaLaurie met her fate, but I was happy that it was Queenie (Gabourey Sidibe) who got to carry out the long overdue social justice of extinguishing Delphine before her racist murder scourge got too out of hand. If this season got anything right, it was when it let Kathy Bates (and Gabourey Sidibe, in the scenes they had together) devour the scenery and let her horrify us whilst giving us an intriguing analysis of individual racism and motivation to kill. Also, since Bates’ character is based on a real person, Murphy and Falchuk obviously felt responsible for portraying her accurately, a feat that I believe was admirably succeeded.

But now Coven’s intentions are clear: a new Supreme must rise and all the surviving ladies of Miss Robichaux’s are to take part in the Seven Wonders in order to make a proper discovery. Who will it be? As always, tune into FX this Wednesday at 10:00 to find out!

-This week, I had a squeeing fit similar to my reaction last week to Delphi Trust getting the ax. What caused it? Misty Day (Lily Rabe) emerging from Madison (Emma Roberts) burying her alive and proceeding to whomp the everloving shipoopi out of her almost-murderer. Though I admire Emma Roberts for what she’s done with this role and have been impressed with her performance in a more mature role, this character has never stopped being a piece of absolute human garbage and I officially reached my peak of cathartic jubilation when Misty treated Madison to a surprise ultimate fighting lesson in the lobby of Miss Robichaux’s. It was quite possibly the most magical, put-a-tear-in-your-eye moment of the whole season. My only hope is that someone takes it upon themselves to create an American Horror Story: Coven video game that includes an Mike Tyson 1998-style fight sequence where you get to portray Misty Day and recreate the aforementioned moment of well-deserved savagery.

-My fondness for Papa Legba (and Lance Reddick) grows with every passing episode, but I’m glad there’s only one more episode that might contain this character. After I had finished watching this episode and was ready to hit the hay, I turned off all the lights in my house and suddenly had a horrendously cloying feeling that Papa Legba was dangling from the ceiling inches away from me, readying himself to scare me out of my skeleton. He is seriously the type of creature that, just by the passing cerebral image of him alone, would make me sprint up the stairs before bedtime out of fear for any lasting demonic influence. So thanks a bunch for that, American Horror Story: Coven!