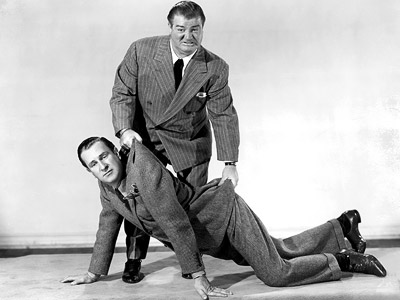 Does anyone else enjoy a carefree Saturday morning only consisting of eating endless bowls of cereal, pajama pants and, the best part, black and white television series, such as I Love Lucy (1951-1957), I Dream of Jeannie (1965-1970), and Abbott and Costello. While televisions made their first appearance in the late 1940s, William “Bud” Abbott (1895-1974) and Lou Costello (1906-1959) took over every black and white, and coloured, televisions as an American comedy couple whose on and off stage vaudeville, radio, film and television work will make them legends in the world of comedy infinitesimally. Though, my fellow geeks, would you still be laughing if you knew that they engaged in arithmetic shenanigans that created much controversy amongst adolescents in the 50s?

In one of their most famous films, In The Navy (1941) the dynamic duo was featured in an episode where Costello comes up with a creative method of counting, where he displays three different ways of proving that 7 multiplied by 13 equals 28. Ironically, these three methods, multiplication, long division and addition, actually make the perfect amount of sense. There has been much controversy about any possible subtraction methods that could further prove Costello’s assumption as, either, false or true. Unfortunately, as of now, there is no improper or false subtraction formula that would coincide with any of the comedian’s calculations.

In addition to false pre-algebraic methods and arithmetic, Abbott has successfully tricked his partner into believing that a 10-year old lover would eventually catch up to his age, causing him to wait for her. In 1941, their second film, Buck Privates, was a box office hit where they play the role of tie salesmen who enlist in the army as opposed to possible incarceration.

Abbott: You’re 40 years old, and you’re in love with a little girl, say 10 years old. You’re four times as old as that girl. You couldn’t marry that girl, could you?

Abbott: Here’s the question. How long do you have to wait before you and that little girl are the same age?

Costello: What kind of question is that? That’s ridiculous. If I keep waiting for that girl, she’ll pass me up. She’ll wind up older than I am. Then she’ll have to wait for me!