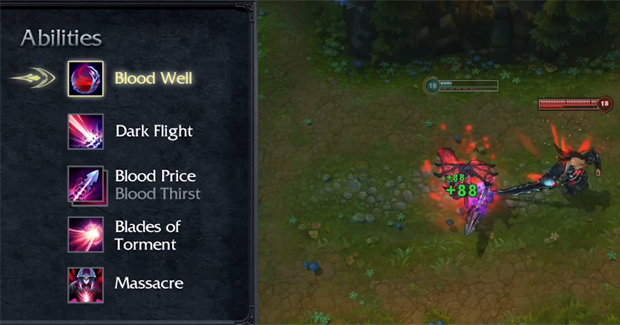 Aatrox, the Darkin Blade got officially released on June 13th to the public. Of course, as with every new champion, there are people screaming, “Overpowered!” and also, “Underpowered!” In order to solve this mystery we’re going to take a look at Aatrox’s kit and give some impressions. Let’s start with his passive, which plays a key part in his kit.

Blood Well is the third passive to come out in the dreaded resurrection family. As Aatrox uses his abilities his Blood Well meter will fill up; all of Aatrox’s abilities have a health cost and how much the meter fills is however much it cost him to use the ability. When he is dealt fatal damage Aatrox will resurrect after a few seconds and will come back with an amount of health based on how full his Blood Well was at the time. Unlike Anivia and Zac, who also have res. passives, Aatrox in untargetable and invulnerable during his healing process. Blood Well also has a second effect that increases Aatrox’s attack speed based on how full his Blood Well is, up to a max of 50%.

Impressions: This is markedly better than either Anivia or Zac’s passive. Not only can Aatrox come back from the dead, but there is also no way to interrupt it, and it happens much quicker than the other res. passives. On top of that, Blood Well can give Aatrox a massive 50% AS bonus, even at level one. That’s essentially getting the AS stat off a Phantom Dancer almost right from the start. Gameplay has shown that it is rather easy to fill and maintain his Blood Well making this massive AS buff almost always active.

While it is clearly better than other comparable passives, Aatrox plays much different than the others. Aatrox is an auto-attack based melee champion. That’s a dangerous archetype to be in these days. If he wasn’t untargetable then it would be pointless, every time he goes down it’s going to be in the midst of the enemy. His passive would never revive him if it didn’t protect him from damage. The attack speed buff does seem a bit much, I wouldn’t be surprised if it got toned down in future patches.

Dark Flight launches Aatrox into the air, he then slams down within 650 range, damaging enemies in an area and knocking up enemies in the center.

Impressions: This is essentially a mini Malphite ultimate on a much shorter cooldown. It allows Aatrox to get right in the mix if he needs to or to get away. The animation is quick and can be used to dodge incoming projectiles. All in all this seems like a great ability that with good timing could save you from all sorts of terrible lasers and ice arrows.

Impressions:  This is the bread and butter of Aatrox’s kit and easily his most powerful ability. The damage from Blood Price scales with bonus attack damage at 1/1 on top of the already impressive flat damage. At low level Aatrox is essentially getting in 4+ attacks worth of damage in 3 attacks. Blood Thirst is really where this ability starts looking a bit too powerful. The healing seems fine enough, until Aatrox drops below half health. It scales with bonus AD at a ¼ ratio and heals for 20 flat at rank 1, increasing up to 40 at rank 5. At low levels this means that Aatrox can heal 60 plus 75% of his bonus AD every third attack. People used to hate the healing potential on Xin Zhao, and this just blows his out of the water. This is an ability that will definitely see some toning down.

Impressions: Blades of Torment combines with Dark Flight makes Aatrox a pain to get away from. If he can hit you with the slow it’s generally enough for him to close the gap into a Dark Flight knock up. Aatrox lacks a stun and his only hard crowd control is in a small area for literally 1 second. So this long reaching slow seems like a good way to help him get into and out of brawls without giving him too much.

Impressions: More attack speed! That’s great since it synergizes so well with his W. The increased melee range makes it easier for him to reach enemy champs and keep dealing damage as they run. It’s not a particularly exciting ultimate, but it certainly goes well with his kit.

Overall: Aatrox is a strong champion, which often happens with new releases. He has exception sustain and great damage with mobility. During the champion spotlight, they focused mostly on Aatrox as a top laner, but I see a better spot for him in the jungle. With his ability to toggle between awesome damage and insane healing, he should be able to infinitely clear camps and do it very quickly. His Dark Flight lends well to ganks as does his long reaching slow.

The Biggest downside Aatrox has is that he’s a melee auto attacker. This means that he’s always one stun away from just being wiped of the field. He certainly can’t gain back his health if he can’t swing his sword. That’s where the revive on his passive comes in and why it’s necessary that he be untargetable during it, otherwise he wouldn’t last two seconds in team fights. Aatrox is going to see nerfs, his W is just too strong right now. It gives him infinite sustain, which we’ve seen Riot bring the hammer down on before.

Items: His kit comes with a ton of AS so it’s okay to go for AD to start with. Bloodthirster synergizes well with his healing and raw damage and would be my first big items. If you really want to lean more on AS then you can go for a Blade of the Ruined King and focus on finishing the Bilgewater Cutlass early. Aatrox lacks survivability when he’s not swinging so make sure to pick up tenacity.  If not in your boots then grab a Zephyr for the movement, AD, AS, and tenacity. Also in this vein, it might be worth picking up a Quicksilver Sash to help you out in a pinch. Spirit Visage‘s passive healing increase can make it even harder to pull Aatrox out of a fight when he’s hacking away.