9/11 and the Changing Politics of Garth Ennis 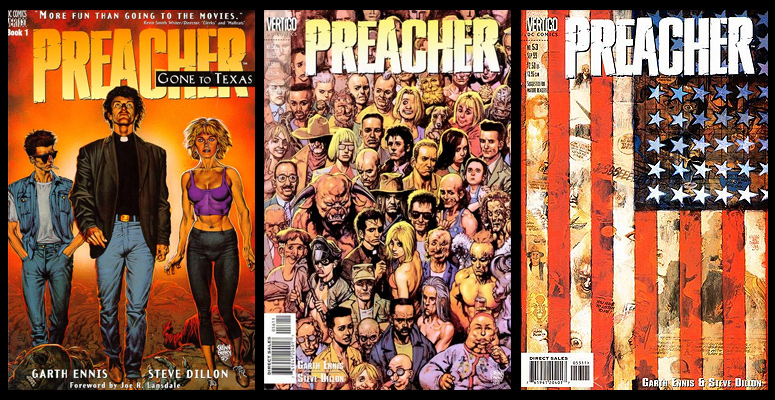 ‘Preacher’ and’ The Boys’ are two graphic novels from the immeasurably talented Garth Ennis. The latter ended recently (2012) while Preacher is a product of the 90s. The weight of the decade between the two is evident: the world has changed dramatically between their publication. Both series are love letters to the USA, but in different ways.

The Changing Politics of Garth Ennis

Preacher is a Western, dripping with colour and colourful characters. Ennis languishes in the details of the arid Texan scenery. In the first book, the characters headed towards New York, where a serial killer was loose. Despite his predilection for cutting off parts of people and then nailing them back on, the killer was just a broken part of a working country – a fly in a perfectly edible soup. Before the end, he was defeated.

The Boys opens darkly: Scotsman “Wee Hughie”, girlfriend, and dreams, are crushed by an American superhero. Offering little more than vague acknowledgement of it, “A-Train”, the Yankee powerhouse, zips back across the Atlantic Ocean. A-Train is more than just a wayward antagonist: he’s an American institution; part of the state-side psyche: where superheroes are venerated, despite being twisted, unaccountable children with god-like powers.

The enemies of Preacher are like weekly villains; Jesse’s demonic extended family flesh out our protagonist’s back-story while also providing the thrills and spills of another encounter. In The Boys the enemy, government corruption, cannot be defeated so easily. The eponymous team tear apart many groups of miscreant have-ago-heroes, but remain a long way from bringing down the system. They have the physical means, but their game cannot be won with muscle – damage is dealt on Capitol Hill as much as on battlefields.

What changed in Ennis’ vision of America? It has to do with 9/11. In The Boys, superheroes were involved in the fateful day – and the Brooklyn Bridge was destroyed. Beyond adding narrative flavour, 9/11 is an omnipresent character throughout, such as when the heroes charter a plane which is transporting hooded prisoners to Guantanamo.

It is deeply pessimistic about “Homeland Security”, about the ends and the means, and the curtailing of civil liberties. The characters wallow; fighting each other in an ever-growing cess pool of lies and scandal.

Pre 9/11 Preacher contains none of that, the problems are final bosses of a video game. It is a fable, a tall-tale of larger-than-life characters who chew the sunburnt scenery. Those that arrive with too much severity are quickly handed a dose of black comedy (think Herr Starr’s ‘unfortunate’ dismemberment).

We only see landscape that isn’t cold metal in The Boys when Hughie or Butcher (a Londoner) return to the UK. Every step Hughie takes in New York is littered with perversion, bodily fluids, or uncomfortable truths.

Using foreign nationals as protagonists instead, Ennis displays his current disinterest in the American narrative. Whether it is his own opinion falling onto the pages, or whether he is merely a mouthpiece for the wider world, Ennis is reflecting a changing mood in America.

The Walking Dead: Spoil Yourself!

Proud to be a Gleek