7 Most Geek-Friendly Cities in the US

Some of us live in the dark spots of the nation, far away from our geeky brethren and the gatherings (known in the geek dialect as cons; not to be confused with scams) that bring them together. We are forced to either travel hundreds or thousands of miles at great expense or sit at home and observe from afar via shaky YouTube videos. We unfortunate geeks can only envy those of you who live in The Promised Land, California, or some of the other geek oases spread across this vast nation. One day, some of us exiled geeks may be able to visit, or, fates allow, live in one of these golden cities. So here, for the collective consideration of stranded geeks everywhere, are the top geekiest cities in America. Note: for those of you outside of America, just move to England. They’re all geeks over there.

Once a year, this balmy city becomes home to the temporary Mecca of geeks: San Diego Comic Con. If you are any kind of geek, you have not lived until you’ve attended the biggest celebration of the nerd life in the world. Or so I’ve heard, as I have yet to attend and begin living. The annual gathering of over 130,000 people covers comic books (hence the name), games, TV, movies and just about every other geeky thing imaginable. Among the 130,000 geeks at Comic Con, many have moved to San Diego to be sure to attend this every year. Not bad, depending on your budget, the condos for sale in San Diego might not be too expensive. Living in San Diego guarantees attending the Comic Con.. The casts of all your favorite movies and TV shows will be present to answer your questions (if you can actually get into the panels) and hand out vague spoilers that don’t really tell you anything.

If you are a geek who wants to follow the Jesse Eisenburg/Michael Cera/Zachary Levi route, turning your obsession into profession and using your awkward charm to build an acting career, then this city is the place to live. Try not to get lost in a crowd of the thousands of other aspiring young actors who had the same idea. Even if the acting thing doesn’t work out (it won’t), The City of Angels is a pleasant place to live. All your favorite celebrities either live in L.A. or frequently visit, so expect sightings (disclaimer: GeekInsider does not condone stalking of any kind), and the climate is warm and sunny year-round. I once visited in December and was surprised to see that the stereotype of ridiculously bronzed, beautiful people playing beach volleyball in bikinis and rollerblading on the boardwalk licking ice-cream cones is actually spot on. There are geeky gatherings like the Anime Expo to keep you entertained, plus you’re living in California, which is home to THE COMIC CON. 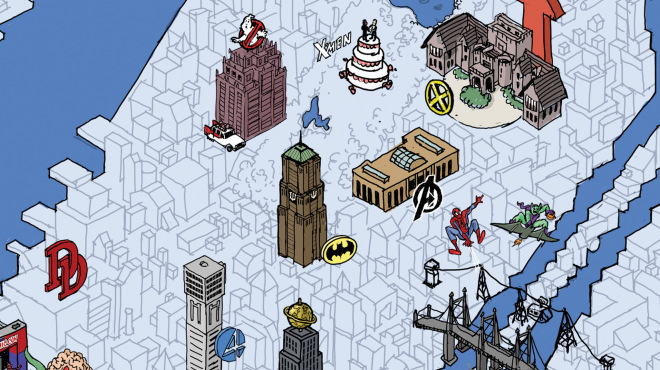 The celebrities who are too cool for SoCal live here. If L.A. is home of the bottle blondes, then New York is hipster central. But don’t judge a city by its irritating wannabe subcultures; judge it by its awesome authentic ones. Geeks thrive in the Big Apple. There are so many amazingly geeky places to visit and hang out that it’s almost overwhelming: Museum of Comic and Cartoon Art (MoCCA), Toy Tokyo Underground, Brooklyn Superhero Supply Co., Barcade, The Paley Center for Media, VideoGamesNewYork, New York Comic Con (San Diego’s slightly less scary cousin), and more comic book stores than you could ever visit. New York City is an exciting place for geeks to live, work, play, and stalk fictional superheroes that make the city their home.

4. All the cities in Silicon Valley, California

Rich smart dudes make cool toys here. Tech geeks the world over dream of working at one of the myriad tech companies that have their headquarters in this central California valley. On your days off, you can visit attractions and events like The Tech Museum of Innovation, BayCon, Cinequest Film Festival, FanimeCon, Computer History Museum, and of course Googleplex. The whole area is basically a geek’s natural habitat, where we can absorb both the pleasant climate and permeating aura of smartness.

There is a con here for just about every month of the year. PAX Prime, GoPlay Northwest, Emerald City ComiCon, Sakura-Con, and GeekGirlCon are a few of the many geeky attractions. Plus the gloomy climate protects sensitive gamer skin that is rarely exposed to sunlight and promotes the indoor lifestyle we’re accustom to.

While our capitol may not have a lot to offer pop culture geeks, it has enough museums and historic sites to entertain history buffs and science nerds for the rest of their lives. Attractions include the Smithsonian Institution’s many museums, National Air and Space Museum, National Museum of Natural History, National Gallery of Art, International Spy Museum, Newseum, and The National Cryptologic Museum, to name just a few.

Home to Disneyland, Universal Studios, The Wizarding World of Harry Potter, and Epcot (I spent my time in Florida at Busch Gardens, because… cheaper), Orlando is the perfect place for movie-lovers to feel like they are getting up close and personal to the glamorous sets of Hollywood while actually being on the other side of the country at a tourist trap. If you can avoid getting killed by crazed rednecks or alligators, it’s also the place for pasty gamers and serial Netflixers to get a little sun. If you’re really lucky, you won’t get second degree burns over 50% of your body like I did last summer (50 SPF sunscreen is not, I repeat NOT strong enough to protect a pale, indoor-loving recluse originally from England from the Florida rays).