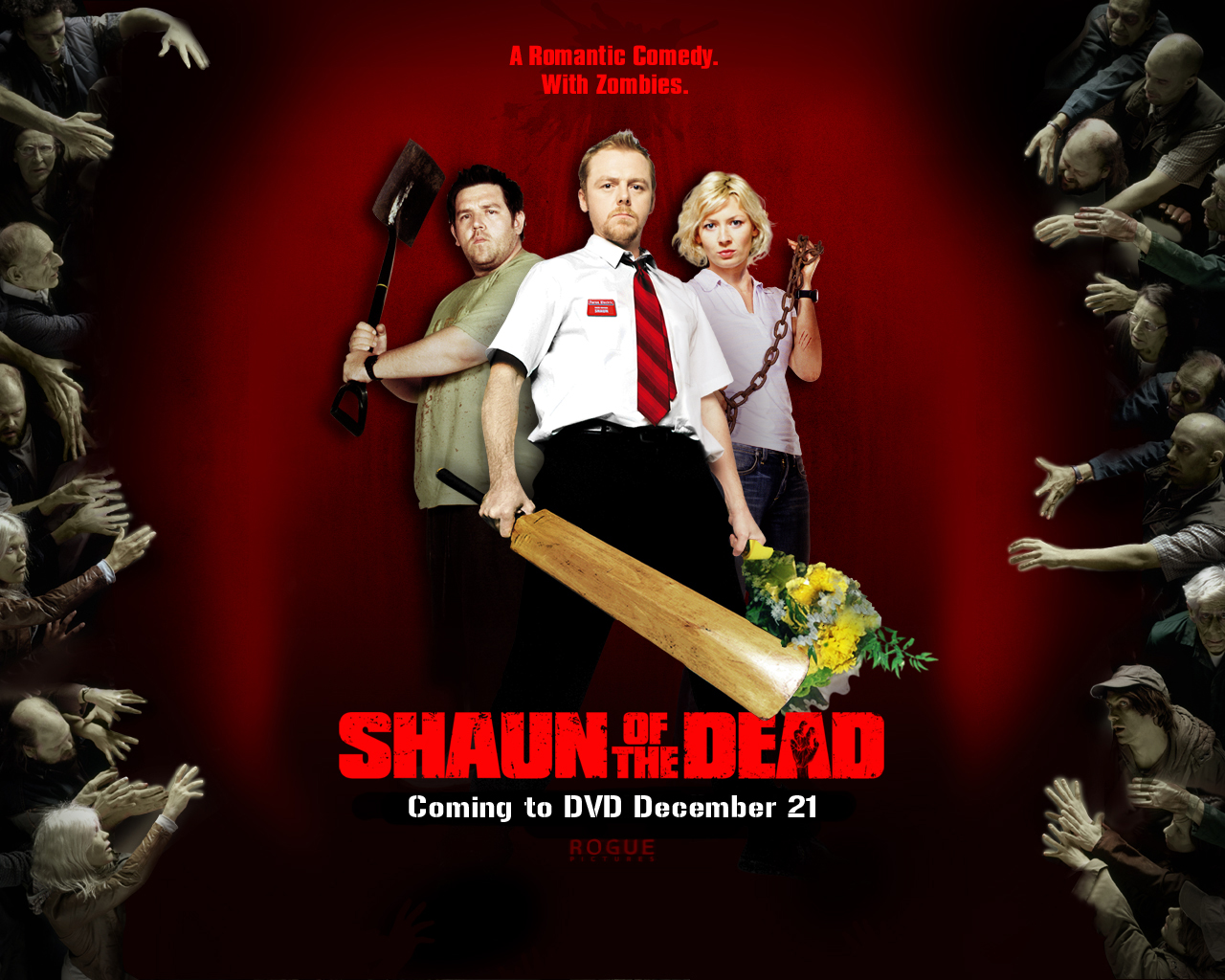 I decided to start the New Year off right by watching the Shaun of the Dead commentary, led by Simon Pegg and Edgar Wright! The insight they provide gives the movie all new meaning. I learned so much about what went on behind the scenes, and how they were inspired for such a hilarious script. Knowing what I know now, every future viewing of Shaun of the Dead (and let’s face it, there will be many more) will be enjoyed on a whole new level.

I think we all know that Pegg and Wright spoofed Romero’s Dead movies, but did you notice how much influence those old films really had on Shaun? There were numerous references to the Dead movies throughout the film, but when Romero saw the movie for the first time, he didn’t get any of them! Romero called Pegg after the viewing to discuss it and congratulate him on a fine film. Pegg had to be the one to point out all the allusions, including the most obvious: when Nick Frost’s character says, “We’re coming to get you, Barbara.” Romero’s films never reveal the actual reason for the zombie outbreak, and keeping this element in Shaun was important to both Wright and Pegg. Many theories are proposed throughout the movie, but nothing is explained further. Most famous zombie films also refrain from using “the zed word” (aka “zombie”), and of course, this is also true of Romero’s Dawn of the Dead. Frost’s character, Ed, at one point uses the unspeakable term and is immediately reprimanded by Pegg’s character. Despite missing all the nods to his past films, Romero was so impressed with Shaun that he asked to have Pegg and Wright appear as zombies in his current movie, Land of the Dead.

The Winchester is based on a real pub Simon Pegg and Nick Frost used to frequent, Duke of Albany. The landlord and landlady actually were named John and Bernie! John frequently made sandwiches for the regulars, so the line about “the Breville out back” refers to the sandwich maker in which he would toast them up. Pegg and Frost also went to the pub’s Thursday night quiz on a regular basis, which inspired the line, “We do the quiz.” The pub’s exterior was used for the film, but the interior was built at the Ealing Film Studio. In 2007, Duke of Albany was demolished and the area turned into an apartment complex.

You might have overlooked this actor in the film; his role was somewhat brief. Tim appears early in the film as an usher, and then later as a zombie with an amputated arm who attacks Pegg and Frost’s characters in their living room. He really does have an amputated arm! He works as an amputee stuntman, and has appeared in many other films, including Murder City and I’m Spazticus. Tim is also a master fencer. He has a very positive outlook, and does not consider himself to have a disability. Pegg mentions how Tim actually jokes about his amputated arm, and often dressed it up on set as if it were a discarded bloody stump!

Did you notice how many characters from the beginning of the film appear later as zombies? Well, it’s almost every single one! New crew members were also brought in to help wrap up the zombie invasion: Edgar Wright appears during the zombie walk through the park (he’s the one dressed in black who falls over himself), and Alan Jones from the camera department appears twice – once as a bald zombie in a checkered shirt, then again as a zombie from a Mini TV ad. The idea for Shaun was originally inspired by an episode of Spaced (a sitcom also written by Simon Pegg). Just as almost every character from the beginning of the movie appeared later as a zombie, just about every actor to EVER appear in ANY episode of Spaced had a cameo. The main stars of Spaced, Pegg, Frost, and Jessica Hynes, also played the main characters in Shaun. Actors and actresses who made small guest appearances on Spaced including: Mark Gatiss, Lucy Akhurst, Paul Putner, Robert Popper, Michael Smiley, David Walliams, Paul Kaye, Peter Serrafinowicz, Bill Bailey, and Julia Deakin; were also given bit-parts in Shaun. There was even a small scene written to star Aida the dog (Colin in Spaced), though they never had time to film it.

When Ed is talking to Shaun at the beginning of the film, he literally outlines the entire movie. Ed, played by Nick Frost, hits on every plot point when he details what the two men should do the following day. He begins by telling Shaun, played by Simon Pegg, that he should “have a Bloody Mary, first thing.” Notice the nametag of the checkout girl they find in their garden, first thing in the morning – it’s “Mary,” and she certainly is bloody! He goes on to say they’ll next have “a bite at the King’s Head,” which is a nod to when Phillip, played by Bill Nighy, gets bitten. “Grab a couple at The Little Princess” later happens when they pick up (or grab) David and Dianne (a couple) at Liz’s (a little princess). Ed elaborates their day further when he states they will “stagger back here.” Did they walk swiftly and gracefully back to the Winchester at the end when they were all zombies…or did they walk stilted and slow (some might even say, staggering along)? The final line of “Bang! Back at the bar for shots,” is in reference to the rifle that is used once they all do make it back to the Winchester.