So, way back in 2007, I bought a ticket to a little movie called Transformers, which turned out to be one of the worst movies I’ve ever seen. It was so bad that I vowed to never again give another penny of my money to this bombastically stupid franchise. And I haven’t. That includes the $0.99 rental fee for the current movie of the week, Transformers: The Last Knight, which I clearly have not and will never watch. Rent it at your own risk. Or you can do like I did and spend that dollar on a more interesting title in the Movies You Might Have Missed section of iTunes. So …

The Ain’t Rights have been on the road for months playing gigs for room and board, but when their latest gig at a Neo-Nazi compound takes a turn for the worse, they unexpectedly find themselves in a fight for their very lives. Trapped, tortured, and hunted, they’ll need their wits, a little help, and more than a little dumb luck to make it out of the Green Room alive.

If that plot synopsis sounds a little vague, know that it is intentionally so. Part of what makes Green Room such an effective piece of work is the act of watching the ever-escalating madness and brutality unfold before your very eyes. To ruin even a moment of that insanity for someone who hasn’t yet experienced it is sort of just unconscionable. Just know that said insanity involves in no particular order: dogs and slo-mo moshing and drugs and guns and pitch-black humor and Dead Kennedy’s covers and a villainous turn from Sir Patrick Stewart and, um, machetes. Got it? Good. Thus concludes our discussion regarding the story in Green Room.

Now, let’s talk a little bit about the folks who brought that story to life. Namely Green Room‘s Writer/Director Jeremy Saulnier. If that name isn’t familiar to you, then learn it now. Saulnier broke onto the indie scene back in 2013 with his brooding, bloody revenge thriller Blue Ruin. Following that film with one that’s bigger, bloodier, and even more brooding might seem like a bit of a risk. It is. One that Saulnier greets with the toothless grin of a salty old punk picking himself up off the floor to shout one more “Oi!” back into the void.

As you might have guessed, tonal generalities (and brilliant turns from actor Macon Blair) are about all the two films have in common. Green Room finds Saulnier supplanting the slow-burn methodology of Blue Ruin with the raw, unfiltered energy of a mosh pit. As his meticulously scripted tale unfolds, the carnage arrives with the filth and the fury of a punk rock mixtape. One that Saulnier presents with the exacting spirit of a nihilist demigod, often tempering the action with moments of relative peace (i.e. relishing in the quiet of an eerie, early morning bike ride or using super slow-motion to turn a group of moshing Nazis into a ballet of operatic entanglements).

Even in those oddly peaceful moments, you can feel Saulnier ratcheting up the energy for the mayhem to follow. When that mayhem arrives, well, it does so with the subtlety of a power chord, only with more blood. And make no mistake, Green Room is a decidedly bloody affair. Still, even as the body count rises, Saulnier & Co. refuse to sensationalize a single second of the bloody business at hand, rather presenting the violence as bumbling and stupid and intimate; like it so often is in the real world.

That refusal to sensationalize is the reason the violence hits so hard and so heavy. It helps of course that the characters involved in each act are so well drawn that we feel their pain and torment as each savage act is perpetrated. Powerful performances from Anton Yelchin, Alia Shawkat, Imogen Poots, Mark Webber, and Macon Blair do nothing but bolster the personal dramas unfolding under the chaos. As good as that crew is, it’s Patrick Stewart who steals the film. As the leader of the skinhead movement, the legendary actor delivers a haunting, ferocious performance that breathes menace with every carefully chosen word, Machiavellian act, and calculating silence.

Simply put, Stewart is operating on a level here that we’ve never seen before. One that we didn’t even know he had. The icy, intellectual resolve he brings to the action is what makes Green Room feel so damned frightening. It’s also a big part of what makes the film so damned watchable. 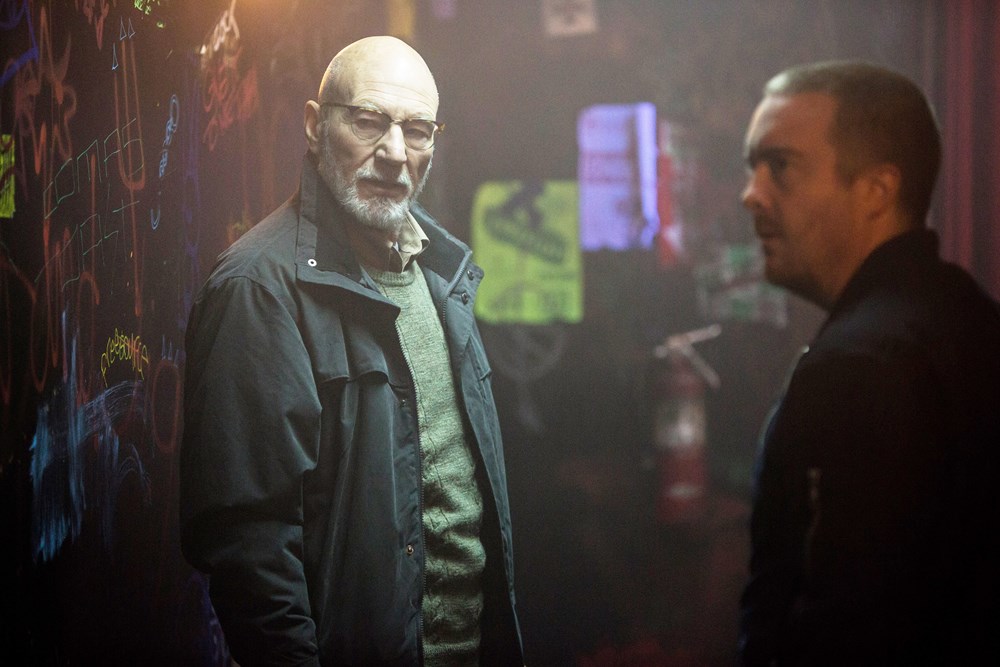 You better believe it. Released in May of 2016, Green Room was actually my favorite film of that year, mostly because it felt almost prophetic in its knowledge and fear of the burgeoning white nationalist movement. It also wasn’t afraid to call the people involved in that movement what they are, white supremacists. Even if certain individuals choose to call them “very fine people,” they’ve been wreaking havoc in the nearly two years since Green Room‘s release. That leaves Saulnier’s unapologetically brutal film more relevant now than ever. Just FYI – it’s still a hell of a lot of fun to watch as well, if only because it’s so satisfying to see evil, murderous Neo-Nazi scumbags get what’s coming to them. That sort of fictional satisfaction should be worth a buck to anyone frustrated by the current state of the “union.”