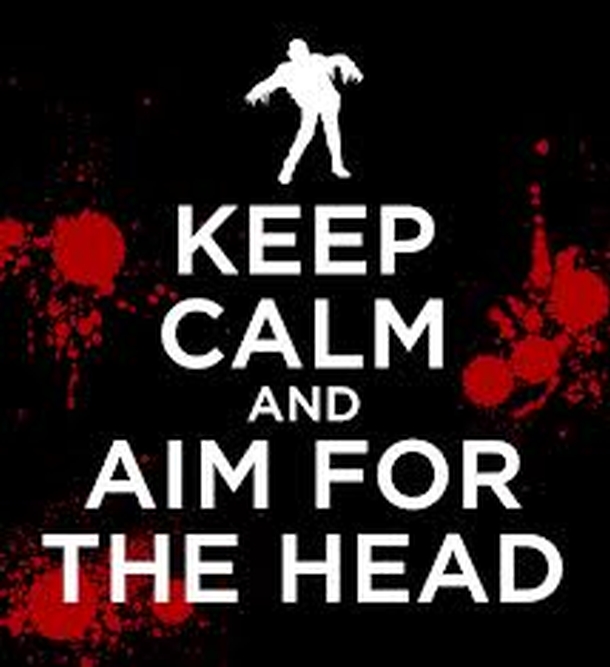 I know, there’s loads of Zombie Survival Guides out there for when Z-Day finally hits us and we all end up living in a Zompocalyptic land. But why should we wait for science to finally bring about our destruction? There are things you can be doing right now, that will drastically increase your survival when the inevitable happens.

You know that person you’re friends with on Facebook whose main talents include matching shoes with outfits, or that friend that weighs into a debate about something without having the first clue of what people are talking about?

If they have no discernible skills that would serve your band of survivors….. I’m not saying don’t rescue them. I’m just saying, consider that if they fall, their role in the survival of the group was to be zombie fodder.

Obviously, when Z-Day comes, you’re going to have your mind on a lot of things. It’s better to make peace with the fact now, that there are just some of your friends that you’re going to make a serious effort to save and others that you might end up tripping to save yourself.

Pro Tip: If you can, inquire as to which friends would be most likely to learn skills such as building generators for electricity. These friends get priority rescue status.

2. Know your limitations and push them. (‘Zombieland’, Rule 1: Cardio)

I’m not telling you to start working out now. I’m just saying, I don’t go for a work out because of endorphins. I set my Zombie Run app to ’28 Days Later’ and I run like the undead want a piece of my brain.

It’s important to know what your areas of weakness are. Sure, I might be able to outrun a zombie, but could I out climb it? No. Because I have the upper body strength of a kitten who’s never done a push up. Therefore, whenever I’m out in public, I always pick an escape route where climbing won’t be as much of a factor.

3. In the Zompocalypse, the people who stop being decent humans always meet a sticky end. (Every zombie movie)

You saw it in Living Dead and probably any other outbreak/natural disaster/humans actually having to work together style movie. There’s always those one or two people who decide this is their moment to shine because they’ve never had any real power before, completely oblivious to the fact that the reason they’ve never had real power is because they’re kind of a jerk.

Don’t be this person.

It’s one thing to work out which one of your friends will be zombie fodder, it’s a whole other matter to throw them to the crowd of shuffling dead.

You want to be the good, mostly sensible, character that survives it at the end with everyone glad you’re still breathing while the credits roll. The whole point of surviving the zombie apocalypse is to prove humanity is worth saving.

4. Adopt the ideals of being a Packetarian.

I know, I know, it’s completely against that raw diet you went on. But come Z-Day, you won’t have time to garden your organic sweet potato. You’ll be busy fighting zombies.

If we meet up, sure I’ll let you use the vegetable patch I built in the back of a large truck, but until then, a can opener is your new best friend. While zombies AREN’T chomping at your door, now is the perfect time to try out some Packetarian recipes.

Obviously, don’t go full Packetarian until you absolutely have to, because scurvy is something that pirates get. You’re not a pirate.

By all means, practice putting up a tent for when Z-Day hits. But, there’s never any good reason to go camping, into the wilderness or anyway far, far from civilization. It’s a well accepted fact that if you go camping, bad things will happen to your society while your gone. Hollywood wouldn’t lie to us about this. Hollywood would never lie to us.

A lot of guides tell you to get to a safe place when the dead begin to walk, which is cute and all, but what’s your current situation like right now?

If the zombie genre has taught us anything, it’s that apartment blocks are key to survival in the built up areas. From your shufflers to your runners, a well fortified apartment block can keep you on the side of the living for a fair amount of time. So, why not strike up a conversation with your neighbours about exactly how much tinned food they have in their house?

Also, make friends with people in the country because if you need to get out of dodge, it’s good to have contacts. I’m a country girl and I’m not saying that we have a lot of weapons. I’m just saying that as a general rule we have more chainsaws, shovels, things wrapped in barbed wire, than most city folk.

I hope these help you prepare from the coming Z-Day. Please remember to stay calm in the event of zombiesm. And remember kids, Rule 2- Always double tap.