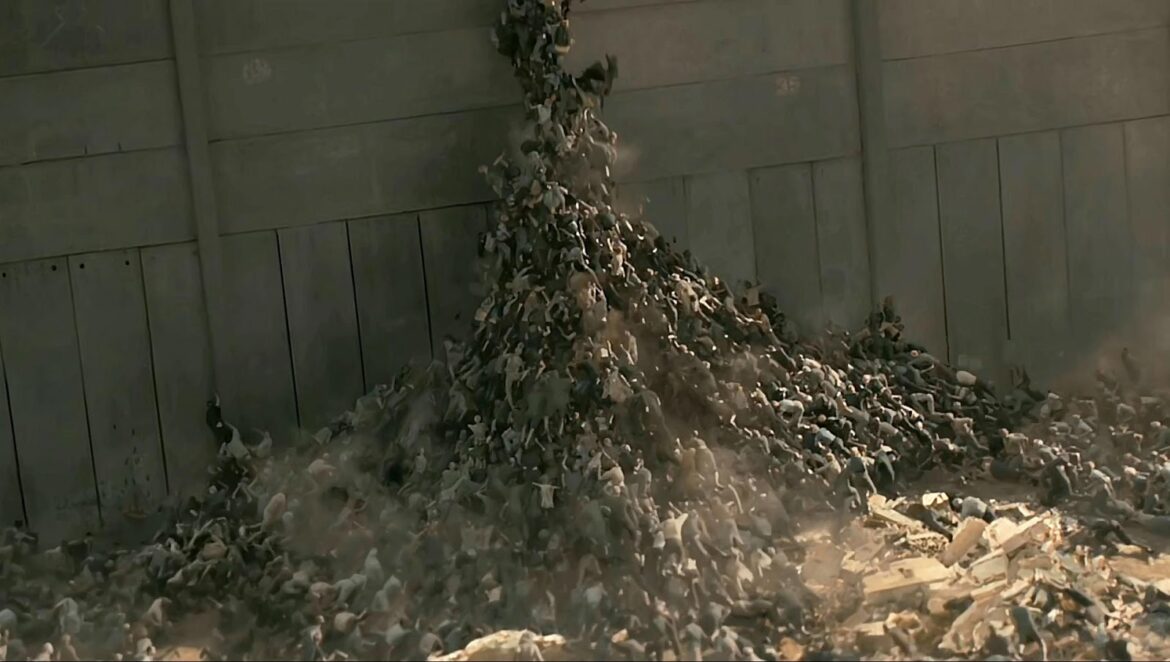 Let me begin this review by saying, I have never read World War Z. I have heard exceptional things about it and am familiar with it’s predecessor, The Zombie Survival Guide. One of the things people always say about Max Brook’s novel, is that it tackles the zombie apocalypse in a round-a-bout way that makes it more interesting. You see, the book is essentially a bunch of first hand accounts from people who went through the zombie mayhem. After hearing that, I was down to toss money at Brad Pitt’s film adaption. I falsely assumed that the movie would be about how the everyman dealt with surviving the apocalypse. Whoops…

The film eschews the format of the novel, instead taking a more traditional route with it. Brad Pitt stars as Gerry Lane: dedicated husband, loving father, and ex-top-of-the-line CIA agent. Oh wait no, I think I confused it with every action movie ever. He was actually a top of the line United Nations investigator. He is called back to duty when the world needs saving and he’s the only one good enough to do the job.  I think director Marc Foster must have been reading nothing but action film taglines for a year before deciding to work on World War Z.

Gerry isn’t exactly an action hero, so that mixes things up a bit. He’s an investigator, so we get to follow him as he travels the globe looking for the source of the zombie outbreak. Gerry doesn’t want to, but the US government is basically holding his family hostage in order to get him to do it. His family only gets to stay on board a protected US ship as long as he’s working for them. So, he does what anyone would do and hops on the first plane to zombieville.

The next long stretch can essentially be summed up as: Gerry arrives, epiphany, oh crap-zombies, Gerry leaves. Rinse and repeat that model a few times you have the biggest chunk of this film. Since Gerry is a master investigator, the only one who could accomplish this mission, he uses skills that nobody else possesses in order to try and trace the outbreak origins. These indispensable skills include and are essentially limited talking to people who know an absurd amount of information for no reason and remembering the stuff they said.

Despite all of my issues with World War Z, it was certainly not a bad movie. I just couldn’t help but feel like a was watching a worse version of 28 days later. The film begins to show you the exceptional movie it could have been in it’s final act. When Gerry and others must navigate a medical facility, it get’s tense. They manage suspense better than any other portion of the movie and it finally get’s exciting. It seems as if Foster tried to create an action film without an action hero.  We want Gerry to be smart, or strong, or capable in combat, or really anything helpful. But, he seems to just jog along in the movie from plot point to plot point without any real interaction.

One the upside, the different settings throughout the movie a very cool to see. Ever wonder how a giant walled of Israel looks surrounded by zombies? Well, it looks pretty damn cool as it turns out. In general the visuals for World War Z are very well done. The zombies look empty, but vicious, and are handling in a smart way. Sometimes slow and lumbering, sometimes quick, but there is always a reason behind one or the other. It has the look of a summer blockbuster movie, sadly it also has the script of one too.

Brad Pitt does his best to left Gerry up as a likable character, and nothing bad can really be said about his performance. For that matter, everyone in the movies does a great job with their respective roles. They’re just held back by a boring script and a lack of time to get to know anyone but Gerry. Which is a real shame, because many of the characters were interesting. World War Z could have set a bar for zombie movies. Based on an acclaimed book that took a unique view of the zombie apocalypse, starring Brad Pitt, those two alone should have added up to more. For some reason though, we end up with mediocrity.

If you like zombies or Brad Pitt, then have a go at World War Z in theaters. Some of the scenes look pretty cool on the big screen, (zombie mass climbing up wall). If you are a fan of the novel or a looking for a change for the genre, then World War Z is worth spending a rental on. Overall I would describe World War Z with one word: decent.