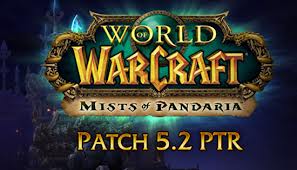 World of Warcraft Patch 5.2: The Thunder King is now available for testing on the Public Test Realms!

Emperor Lei Shen, the Thunder King, has been resurrected and will stop at nothing to reclaim Pandaria.  Heroes from all over Azeroth will be called to war, as they are pitted against the Thunder King and his Zandalari allies.  After landing on live servers, Patch 5.2 will bring an assortment of new content for players to conquer.

Patch 5.2 will bring a new daily quest hub:  The Isle of the Thunder King.  Alliance players will join the ranks of the Kirin-Tor Offensive, led by Jaina Proudmoore, while Horde players will team up with Lor’themar Theron and his Sunreaver Onslaught.    On the Isle, players will join the battlefront and assist their faction in conquering the Thunder King’s island garrison.   Players will earn reputation while fighting alongside their respective faction, which can be used to unlock new quests and powerful items (including a new mount!).  After the Alliance and the Horde have gained a foothold on the Isle, players will have the choice to complete quests that are PVE or PVP centric.

While players will have the opportunity to land on the Isle of the Thunder King as soon as the patch goes live, the Isle and its features are designed to unlock progressively by each realm based on their participation in the struggle against the Thunder King.  Players will want to contribute diligently to the war effort, as other updates and features wait to be unlocked, including the Treasure Room and the mighty Lightning Forge. Once unlocked, the Lightning Forge will allow Blacksmiths to forge powerful items that heroes can wield to dethrone the Thunder King.

With the release of Patch 5.2, two new world bosses will also be available for players to defeat:  Oondasta and Nalak, the Storm Lord.  Oondasta, a giant devilsaur with dual laser cannons mounted to his back (yes, a laser shooting dinosaur!), will be awaiting heroes on the mysterious Isle of Giants.  Serving as the gate guardian of the Thunder King’s fortress, Nalak, the Storm Lord will not appear until the Isle of the Thunder King has been conquered.

Heroes will be called to the Thunder King’s dreaded citadel, the Throne of Thunder, where a new raid awaits.  The Throne of Thunder will consist of 12 unique encounters and will be available in all 3 difficulties (Raid-Finder, Normal and Heroic).  Battle-hardened heroes who are able to take down Emperor Lei Shen on Heroic mode will have the opportunity to face an epic, 13th encounter against    Ra-den, an ancient titan keeper.

Also in Patch 5.2 –The legendary quest, which began in Patch 5.0, continues!  Once again, Wrathion, the Black Prince, calls for the aid of the heroes of Azeroth.  Wrathion seeks knowledge about the origin and source of Mogu power.  Heroes will be forced to overcome several trials as they span the depths of the Throne of Thunder to retrieve the vital information.  While completing Wrathion’s task, heroes will unlock a new legendary metagem, the Crown of the Heavens.

For those wishing to test out Patch 5.2 and all of its (epic!) features, head over to BATTLE.NET to copy your character and download the PTR client.

Tommy O’Neil is a contributing writer here at Geek Insider. He enjoys spending time with his family, keeping up with the ever changing tech trends, and reading. He also shares a strong passion for gaming including genres such as, MMO, RTS, MOBA and FPS. Follow him on twitter