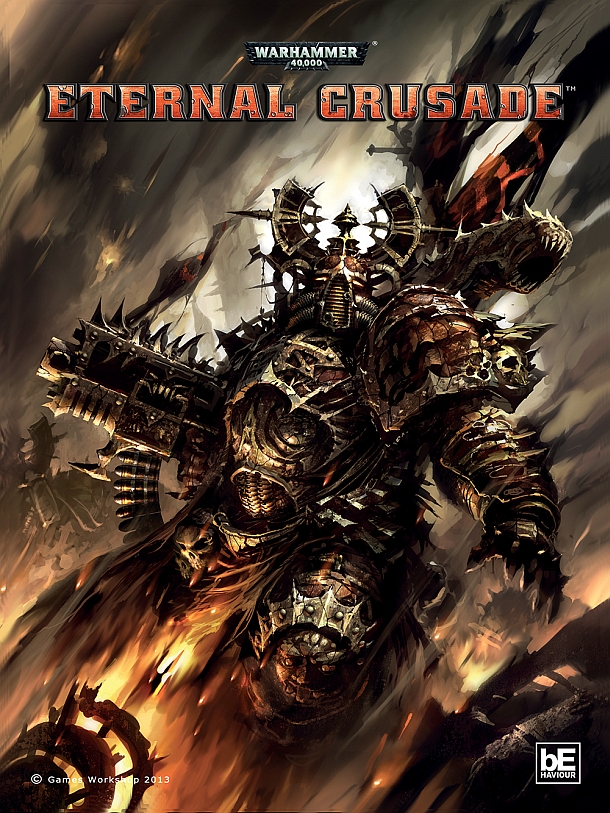 It seems to be happening at a snail’s pace, for those eagerly anticipating the release of the Warhammer MMO, but Phase 3 has finally been launched. And it comes with it’s own set of clues! IT’S LIKE A BOARD GAME!

The launch of Phase 3 for the Eternal Crusade comes in the form of the a YouTube video that lets us all “Meet the team” from Behavior Interactive that will be heading up what could be one of the trickest games to put together, ever. After all, there’s a huge legacy to look after, loads of fans who will want it done ‘their’ way and will tear them apart if it isn’t done right.  The YouTube is meant to contains….some clues.

Clues? You say, I don’t want to play Cluedo, I want to play an MMO!
You will, you will, for now enjoy this YouTube Clip-
Did you see that?
Space Marines. I know, huge surprise, right?! But did you see what ‘type’ of Space Marines they were. The bet in our house is that they’re Dark Angels and Chaos Marines (the Chaos symbol tends to pretty much give it away). There also seemed to be a glimpse of maybe a Khorne Chaos Marine in there because he was all purdddy-looking with the Khorne red. I could roll with that.
The game play, from the few glimpses that you get in the YouTube video, looks pretty fast paced too. I’m not going to say it’s like every FPS you’ve ever played, but it certainly looks very fluid and with some good FPS elements. Though, it’s still early days yet. The fact that some of the team have a ‘pen and paper’ game going, makes me think there will be more to this than just BLAM! BLAM! SPOOOOOSHHHHH (That’s how explosions sound in my head!). I have the feeling they’ll be wanting to highlight the R in MMORPG.What would be really awesome, would be for the marines to all start out in the same training grounds. Maybe blank canvases (I know, not ALL Space Marines start out training, it’s called creative license and I got mine our of a cereal packet! VROOOOOOM!), who then are able to choose what Chapter they go into. If there’s one good thing about the SM’s it’s that they are a diverse bunch of jugheads.You know what else I noticed? Other than the development team seeming to be the right kinds of people to make this game?….. They’re all about the Emperor. Which is cool, I mean, variety is important and we should respect each other’s differences and…. Oh, for Slaanesh’s sake, where are all the Dark Eldar?Come on. They would be the best DPS on the face of the planet! Or planets. Depending on how the landscape is set out….

I know, it’s a pipe dream. On the Eternal Crusade page, you can actually ‘Choose Your Race’ and they’re not giving me any options I’m really that thrilled about. But as a starting point, Chaos Marines, Space Marines, Eldar and Orks are a good launch pad for races.

The sad thing is, I’ve never been good at the mystery genre. The ‘clues’ I’ve found in the video aren’t really revealing anything too spectacular or ground breaking. There might be plenty that I’ve missed and we want to know about them.

Did you spot any clues in the video? Let us know!