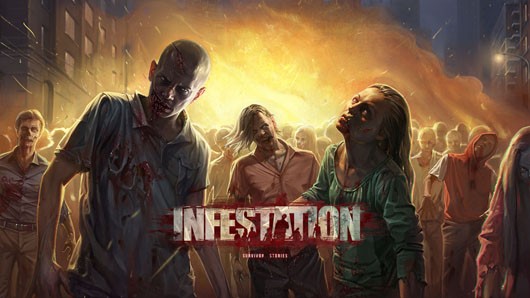 There are few games out there that have seen as many odd news stories and controversies as the game formerly known as The War Z. While most of the bad press surrounding the game has to do with what is actually in the game and how the developers handled that press, there has also been plenty of rumblings about the name itself. The developers might have been slow to fix problems that cropped up from day one, but they have finally managed to get the game a title that isn’t likely to be confused for any other zombie based games or movies.

With the movie, World War Z getting released today, you are probably already a bit confused and wondering whether I mean a game based on Brad Pitt’s work has already been on the market for a while. You might also think I’m confused and keep calling the game, DayZ by the wrong name. Those two titles are why the War Z has now been rebranded as Infestation: Survivor Stories. Hammerpoint Interactive creator Sergey Titov may not have done much to make his game better, but at least now when you’re complaining about the choppy graphics or lack of features everyone will know exactly what game you are talking about.

If you haven’t heard the story of the computer game formerly known as War Z it is quite fascinating. The title went live in 2012, just three days after Hammerpoint had released an Alpha build on Steam. Most players felt they had gotten an early Christmas gift since titles generally don’t hit the open market from Alpha to final build that quickly. It turned out that Hammerpoint and Titov had apparently decided that additional improvements to War Z simply weren’t worth the time and effort and they wanted their money from unsuspecting users as soon as possible.

It didn’t take long for the gaming community to realize that something very odd was going on. Thanks to various Redditors, people began noticing that the game’s description didn’t seem to actually match the game that was being offered. The most glaring example of this was when someone noticed that parts of the description were pulled directly, word-for-word from the description of League of Legends. Hilarity ensued when Titov forgot to pull the part about the game being “free-to-play” out of the title’s description despite the fact that Hammerpoint was charging 29.99 per copy.

While the weirdness of using a description page from an entirely different game, for their own was sort of funny, the false advertising that went along with those hijinx was not. Just days after the release of War Z, players began realizing the sheer number of features that were billed but not included. Various maps, 100 player servers, private servers, and the skill point leveling system were not to be found in the game and no explanation was being given as to why. Worse yet were rumors that players who complained about the game were being banned from the company’s servers.

Eventually, Steam took what was an unprecendented step and actually pulled the title, apologizing to its customer base on behalf of Hammerpoint, since Titov and crew were still staunchly claiming that nothing was wrong and that “93 percent of their customers loved the game.”

Several months later, the game was finally allowed to return to Steam, minus bogus claims and descriptions and the world kept on turning. The rebranding effort has been billed as little more than a way for Hammerpoint to let its title stand out from the crowd and certainly Infestation: Survivor Stories has the ability to become a more memorable title, but you have to wonder whether Titov and crew might have been better off dedicating their time and energy to improving the game as opposed to just trying to repackage the same product as something new.

They’re Taking Over: Five Zombies You May Not Have Realized Were Zombies