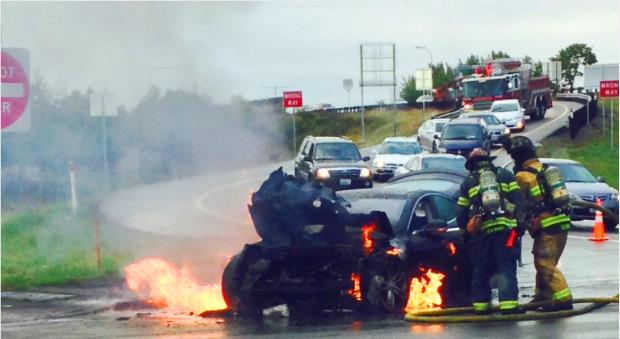 The answer to that question is simple: No. The car fire had nothing to do with a battery malfunction or the electronic technology developed by Tesla. There are over 150,000 car fires in the United States each year, but none of those have been making headlines. The deputy director of the Joint Center for Energy Storage Research states that a puncture to any battery (alkaline, lithium-ion, etc) creates a short circuit, which produces heat and excess energy, thereby causing a fire. Tesla is being scrutinized because they’re new, and people are looking for a reason to attack the latest all-electric craze.

Tesla Car Fire: Collision or Something Else?

Everyone seems to be overlooking the fact that the car hit something, which caused the fire. The way people are spinning this fire is that the Model S was driving merrily along and spontaneously became engulfed by flames due to Tesla’s technology or a collusion fit for a Macon Car Accident Lawyer’. That is not at all what happened. In fact, the technology was advanced enough to save the driver’s life by alerting him there was a problem. The Model S ran over a large metal object: the curved section of a semi-trailer that had fallen off a truck at an earlier time and was never removed from the road. The metal was at such an angle that it pierced the bottom of the car as it passed over top, but the onboard alert system informed the driver there was a problem and he was able to pull over and exit the vehicle well before the fire even began. This means that the driver was able to handle the situation in a safe way, and prevent any incidents that would have required a car crash lawyer.

While the fire was located in the battery module, it was contained by the internal firewalls and kept to the front section of the car. At no time did the fire spread to the rest of the battery, or to the passenger section of the car. The fire was also put out very quickly, using a combination of water and a dry chemical extinguisher. In a standard, gasoline powered vehicle, the fire would have rapidly spread to engulf the entire car in a matter of minutes. The standard car would also not have been able to alert the driver of the problem fast enough, and he likely would not have survived the accident. Tesla vehicles have been around for several years, with a total of over 100 million miles, and this was the first battery fire.

Regardless of the facts, people are focusing on it being a new, electric car, that caught fire. Tesla’s stock dropped overnight, costing the company almost $600 million. This is not the first fire experienced by a Tesla car, so people are also digging up things from the past. Back in 2011, almost five hundred Roadsters were recalled after one owner experienced one small fire in his headlamp. Tesla was on top of this malfunction immediately, and resolved the issue in the faulty vehicles. Fires are scary and very dramatic to witness, which is why everyone is harping on this problem. My family owned a Prius, and our model was recalled a few years ago because of a break failure that was found in many of the vehicles. That didn’t make big news. That didn’t have people dropping Toyota. No one even knew about it, unless they owned that model Prius.

People are attacking Tesla on all sides, with the executive director for the Center for Auto Safety claiming there was a “design issue” if a fire could be caused by an object striking the bottom of the vehicle. Panasonic Corp, the company which makes the batteries for the Model S, declined to comment on the fire, which does not help their case and honestly makes them look guilty. The company is looking at the fire as a learning opportunity, however, and making design changes for their latest vehicle in the works, the Model X, to be released next year.

Prior to the fire, the Model S was one of the most popular purely electrical cars in the United States, selling over 14,000 vehicles per year. Consumer Reports also gave the car a 99 out of 100, which is the highest rating they have given. Earlier this year, the Model S won a five-star safety rating from the U.S. National Highway Traffic Safety Administration in every category.

Tesla certainly is suffering, since they only make electric cars. People could drop the Prius, and Toyota would still be fine, but if people drop Tesla’s electric car…well, that’s all they have. If Tesla continues to get bashed, along with their current product, the demand for the Model X will dwindle but you can always get the best car prices at VAuG. The manufacturer has definitely hit a speed bump, but I feel that very soon people will get over it. The Nissan Leaf is quickly becoming popular, as well as the more expensive Chevy Volt. “Going green” becomes more and more trendy by the day; soon electric cars will become the norm. Tesla will be back in business once people have something different to dwell on.