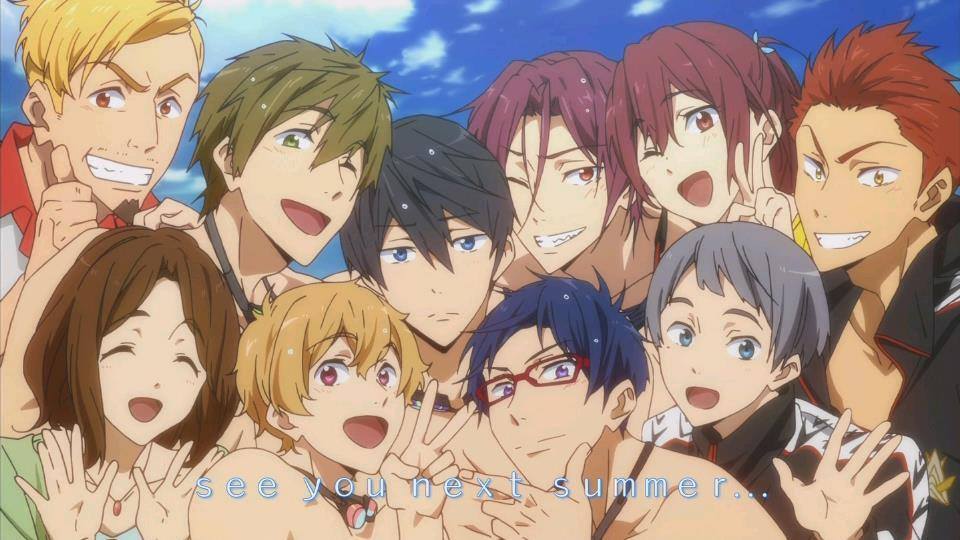 “See you next summer!” was the message fans of “Free! Iwatobi Swim Club” were left with at the conclusion of the anime’s first season. At the beginning of the month a second season was confirmed along with a minute long teaser. The show had fair bit of criticism thrown at it for a “fanservice” based art style and humor but that never stopped a show from getting renewed before and “Free!’ looks ready to come back with more drama and adolescence angst that only sports themed anime can provide.

The teaser doesn’t give us a strong impression about a story arc for the second season. Contrastingly the tone feels very definitive and more serious than anything the first season offered. It feels safe to say we can expect another big swimming competition, the main quartet’s healed relationships with Rin providing some unity between the two swim clubs, and the question of what the future will hold for the main cast being in the forefront. The last bit of narration from the teaser translates to “The first and  last eternal summer” with a shot of Makoto, Haru, and Rin standing by, surprise surprise, a pool.  If the set canonical ages of the trio are to be trusted then the implication might be impending graduation for the three seniors. Since the show is about a swimming team it’s hard to imagine the show continuing without three fifths of the main cast. The graduation dilemma also brings up what will happen with the younger characters (mainly Nagisa, Rei, Gou, and Nitori) who would be remaining in the same schools. Though I’m sure many fans would argue that seeing Nagisa, Rei, and Gou try to run the club by themselves would be endlessly entertaining.

Also in relation to the evolution in the main cast, separate from the teaser announcement, a new character’s design was leaked. Sosuke Yamazaki, voiced by Yoshimasa Hosoya, will joining the other boys in the second season. His brief bio reveals he’s Rin’s best friend from elementary school (we assume from when he was abroad?) and has a very strict philosophy and attitude about swimming. God knows Rin doesn’t need one more person fighting for his attention so hopefully Sosuke will more of grounding force for Rin’s temperament than another source of tension between the newly healed bonds between the core group of boys.

Whatever the second season has in store hopefully we’ll see more of the character interactions that made the show such a hit and some insights into the characters’ plans for the future. We can probably look forward to some more “short” specials this season too. My personal wish list for the season is: more Rin and Gou interactions, Haru or Makoto passing on the swim club to either Nagisa or Rei, and Rei getting to swim in whatever the big competition will be. Let us know in the comments and on Twitter what you’re most looking forward to in “Eternal Summer”.

See you next swim time!