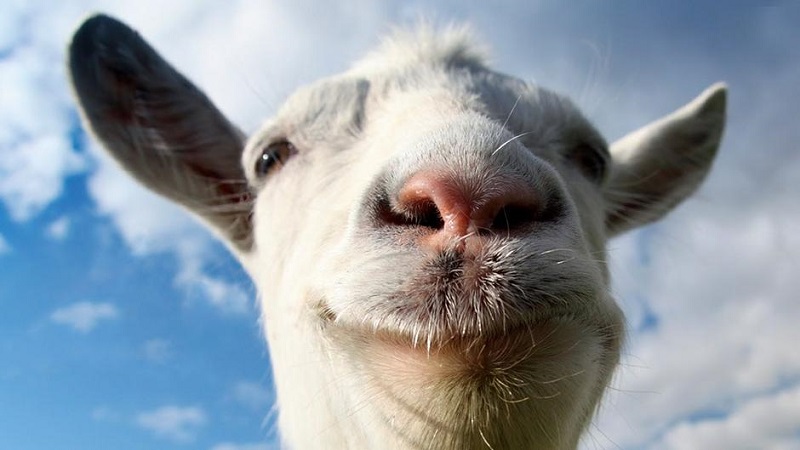 Goat Simulator is more of an interactive joke than a game. It takes place in a tiny rural world that serves as your sandbox, you the player are given control over a deceptively adorable goat that is capable of creating delightful havoc with each and every clop of its hooves. Developer Coffee Stain Studios has really stumbled upon some true genius here with their brilliant use of absurd physics allowing players to destroy, lick, hop and rocket their way around the terrain to discover funny hidden gems, head-butt unsuspecting bystanders and reenact their favorite Michael Bay flicks. Though the game is simplistic both visually and control-wise, it makes for hours of fun even if it is a bit rough around the edges due to some very apparent visual bugs which Coffee Stain has stated won’t be removed.

There’s no real story to be told here, which, to be honest, is kind of refreshing. Instead I created my own story, naming my silly little goat, Billy the Destroyer of Worlds. When the game booted up, I took Billy on his initial romp around the town, completing various achievements and objectives that revolve around a point system. The points are accrued by completing combos (think along the lines of the Tony Hawk games) that are strung together by doing various activities like summersaults, getting hit by cars and vaulting yourself off trampolines. These activities are then multiplied depending on how many different things you do within an allotted time frame. Though this mechanic followed Billy wherever he went, I found that after the initial fun of seeing what ridiculous activities warranted points the system became kind of tacked on and lost its luster. 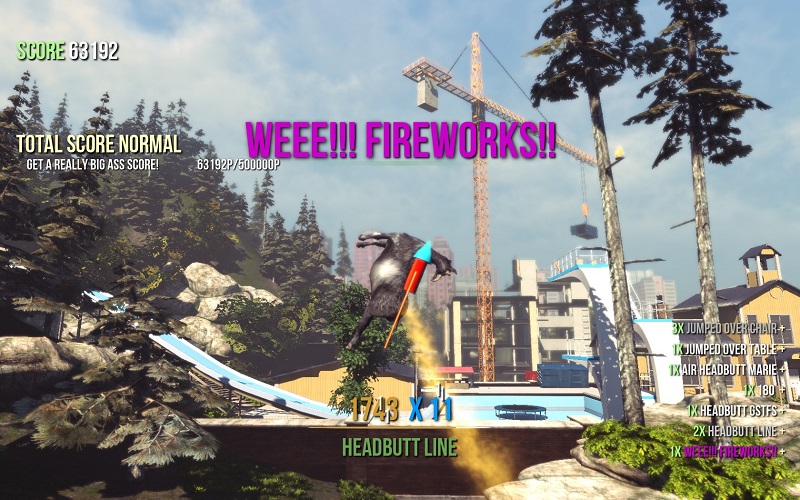 Graphically the game is pretty poor looking, feeling kind of like something that should have been a launch title for last-gen console’s when they debuted back in ‘05. But before you begin to criticize Coffee Stain for not implementing the latest Direct X 11 shadow rendering let me interject by saying there’s something charming about the way the game looks. Billy may not have been the prettiest goat to ever be rendered in a game, but the lack of detail and realism lends to the overall absurdity of the world, complimenting the action, glitches and silliness quite effectively. Don’t expect state of the art and you’ll be pleasantly surprised by just how absorbed you can become while exploring the world.

Goat Simulator’s controls are well executed, even if they are a bit simple. There are only a handful of actions that can be done at any given time, but that’s not necessarily a bad thing. The real fun comes from using your imagination to do the silliest things you possibly can with the tools given. Goats are capable of jumping, licking, headbutting and going limp, creating a ragdoll effect. Licking is more than what it sounds like though, and according to Coffee Stain goat tongues are amongst the most adhesive of all surfaces. Once an object is licked, whether it be human or otherwise, your goat’s tongue will drag it along wherever it goes until you’ve decided to stop. Needless to say, my little Billy had a field day running around, licking unsuspecting civilians and dragging them to the highest points possible before dropping them off and watching them flail all the way to the ground. It all sounds a lot more sinister then it really is, and when coupled with the game’s mockery of physics the whole thing is taken, quite literally, to ridiculous heights making for some over-the-top hilarity. 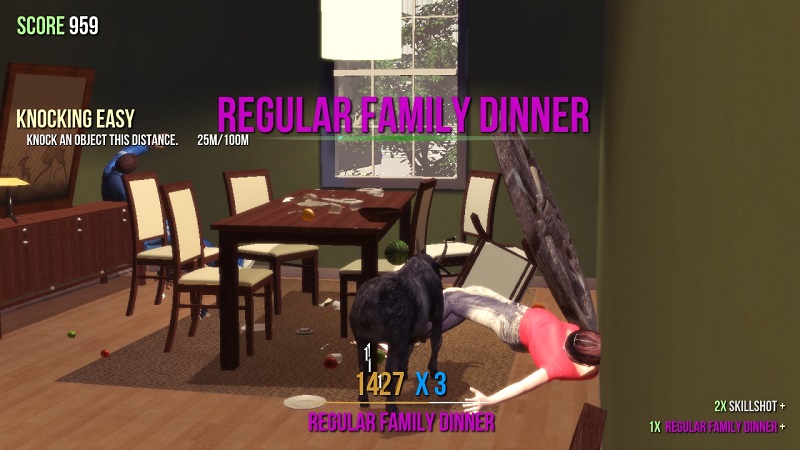 Coffee Stain has implemented a number of various hidden activities like a Jetpack, angel goat, devil goat, and even a Flappy Bird clone called, you guessed it, Flappy Goat. Don’t worry, I didn’t really spoil these anything for you because it’s one thing to know of their existence and another thing entirely to find and use them. These touches are really great at adding longevity to the game world, rewarding players for discovering them and offering incentives to explore each and every nook and cranny of the game world. I hope to see more of these in the future with the game’s upcoming free DLC packs (hooray free!).

Coffee Stain was already one of my favorite developers, what with their fun Sanctum series and awesome gamer-centric mindset, but Goat Simulator puts them into a whole new spotlight, shining upon their devilishly creative sense of humor. Though the game is riddled with bugs, none of them are game breaking. Just be ready to open the console and enter the respawn command. In the end the game is meant to poke fun at the other simulation titles and does so effectively. Though it won’t be something you’re going to play for forty hours straight, it has immense replay value and is perfect for bite-sized goat fueled adventuring. I must say I wouldn’t trade my time with Billy for the world. It’s a budget title that reminds its players that we don’t need to take everything seriously, especially within the world of simulations. There’s something to be said about the inherent fun that lays within forcing a rocket-propelled goat down a waterslide.